Speaking of the darurat, today’s article is somewhat related to the very first darurat we’ve had, aka the first Malayan Emergency. That was an interesting time in our history, and we often stumble upon interesting trivia about it every now and then. For example, did you know that it’s actually more of a war than an emergency? The British gomen just called it an emergency so that plantation people can claim insurance. Like whuuuuuut~~ (๏็ટૄ◟๏็ )

Recently, thanks to a letter to The Star, we also found out that the British used a version Agent Orange in Malaya during the first Emergency. Yes, the chemical used by the US during the Vietnam War. Sounds interesting, so we took an Internet dive to find out more. After wading through a ton of references to the one in Vietnam…

someone stop these memories. Gif from Tenor.

…we learned that in Malaya, it wasn’t called Agent Orange…

The British called it Trioxone, but it’s pretty much the same thing

The Vietnam War and the Malayan Emergency had quite a few similarities, but for a lack of a better way to summarize them, they’re essentially a bunch of white people chasing communists in tropical jungles. Since the Malayan Emergency came first and was handled kind of successfully, and since the British and the US were essentially buddies when it comes to putting a stop to communism in the region, the US adapted a few British strategies to fight the Viet Cong.

Besides the concept of New Villages (which flopped in Vietnam), one of the more interesting strategies that was carried over was the use herbicides, particularly defoliants, against insurgents. Defoliants make plants shed their leaves, which makes it easier to see if a tree got communist guerrillas hiding under it or not. Several kinds of herbicides were used by the US in Vietnam, and these are collectively called rainbow herbicides due to the differently-colored stripes used on their barrels. The most famous of these is called Agent Orange, and it’s a 50-50 mix of two chemicals:

This formula was based on a similar formula used by the British in the Malayan Emergency, called Trioxone. Now, these two chemicals weren’t really top-secret or anything. An interesting property of these chemicals was that they can make most plants with broad leaves drop ’em like they’re hot, while leaving monocotyledons (narrow-leaved plants, like grass) unaffected. Due to this, they had been used in both the US and UK even before the wars: the UK used them to kill pesky weeds by their roadsides, while the US sprayed them over their pine forests to kill off other competing trees.

Basically, the US and the UK saw nothing wrong with using these chemicals at first, either in their own countries, in Malaya, or in Vietnam… until the late 1960s. The US had been pretty liberal in spraying Agent Orange all over Vietnam by then, and people are starting to think that hey guys, maybe we shouldn’t be dumping weird chemicals that can kill trees all over the place. Several researches on the effects of these herbicides popped up, and one of them found that if you feed 2,4,5-T to mice, their babies come out weird.

This led to people fearing 2,4,5-T, and more research and the media soon painted Agent Orange in a negative light. The use of the herbicide was eventually stopped, but it was later found that 2,4,5-T wasn’t the culprit: it was another sneaky chemical called TCDD/dioxin, which was a by-product of 2,4,5-T manufacture. It was hiding under the douchey hat! That crafty little… Original img from Forest Research UK.

Dioxin is extremely poisonous, causing a diverse range of effects in mice like the organs slowly dying out, bleeding in the intestines, and perhaps most importantly, fetus abnormalities, meaning that the babies came out weird. It’s also very persistent, meaning that if you feed it to mice, it will take weeks of them pooping before they’re free of the chemical, and if you spill some on the ground, it will take years for it to break down. However, if you control the 2,4,5-T manufacturing process just right, the dioxin concentration in the finished product can be reduced to safe levels.

Probably not that much, because the British was stingy

The British when the communists destroy yet another infrastructure. Gif from Tengaged.

Let’s rewind a bit and go back to the 1950s. The British, under the command of Sir Harold Briggs (of the Briggs Plan fame) started looking into potentially using herbicides to remove the communist insurgents’ natural habitats by Malayan road sides. Previously, the job was done by manual laborers trimming them three times a year, and herbicides were supposed to cut the labor cost.

Upon recommendation by British company Imperial Chemical Industries (ICI), they decided to use Trioxone as well as another herbicide called sodium trichloroacetate (STCA). These were mixed with water and sprayed along roadsides using a convoy of modified fire trucks, like so:

Perhaps the only image of the spraying in Malaya. From Toxic Remnants of War.

We don’t know the real extent of these sprayings, but it was reported that the British purchased hundreds of tonnes of those chemicals, and in the summer of 1952 alone, 500 hectares of roadside vegetation got drenched in Trioxone and STCA. However, after about seven months of spraying, they found that we had so many laborers that it was really more efficient and cost effective to hire people to cut down the bushes: spraying costed them about $1,700 per mile of road, whereas cutting them down manually only costed like $664 per mile.

So the British stopped their roadside spraying and planned to use these herbicides to sabo the communists’ food instead, which were then grown in hidden plots in the jungle. Apparently, the plan came up because the British got paiseh for buying all those expensive chemicals and having so much left over. In addition to the earlier chemicals, they also used chlorophenyl n’ n’ dimethyl urea for this sabo plan, probably because Trioxone won’t work against monocots. The target? The communists’ hard-grown tapioca, sweet potatoes, and maize. You Westerners and your pesticides… Original img from Factly.

Starting 1953, these herbicides were sprayed using helicopters, in what was called Operations Cyclone No 1 and 2. These sprayings were done on areas that have already been secured by British ground forces, and within a year, 88 sites had been destroyed… and that’s probably it. Remember how the roadside spraying got scrapped because it was too expensive? Well, imagine the petrol and manpower involved in loading up a helicopter with herbicides and flying it over to some abandoned communist garden plot. That plan was later scrapped as well.

As an aside, it should be mentioned that besides being expensive to spray the roadsides with, Trioxone also wasn’t that effective against crops (STCA was found to work better), so the chemical wasn’t really as successful in Malaya as it was in Vietnam. Regardless of that, some believed that this British tight-pocketness kinda saved them the legal headache that the US faced over its use of Agent Orange in Vietnam. However… 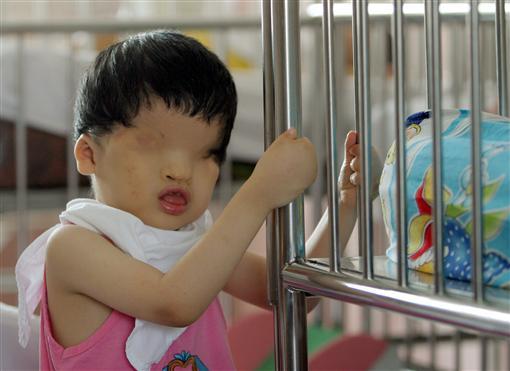 A 4-year old victim of Agent Orange in Vietnam, photographed by Reuters/Kham in 2006.

Look up the effects of Agent Orange in Vietnam, and you’ll find no shortage of references for that. Look up the effects of Trioxone in Malaya, though, and chances are it’ll be a while before you can find something. Some may feel like the information is hard to find on purpose, but based on what we’ve found, a more likely explanation would be that the use of Trioxone in Malaya just wasn’t that big of a deal back then, so nobody felt it worthwhile to keep detailed records of the effects.

For one thing, the spraying operations in Malaya ended over a decade before people started associating Agent Orange with birth defects and stuff. Back then, Trioxone was seen as just a fancy new herbicide and not much else, having been used for non-combat purposes in the US and the UK. In fact, Trioxone was so uncontroversial, it was suggested as a cover story to hide the British’s plans to use tear gas, which was more likely to get them in trouble instead of Trioxone, against the communist insurgents.

In a telegram, Gerald Templer, who was the High Commissioner of Malaya at the time, told the colonial office that if they needed to justify them spraying suspicious chemicals in the jungles, they can use a story that…

“…only adapted to the circumstances, namely that another chemical preparation is being tested for use against jungle cultivation… it gains plausibility since I am spraying jungle crops with trioxone.” – excerpt from a telegram to the Secretary of State for the Colonies, 14 June 1953.

Bearing all these in mind, it seems possible that the British government back then didn’t feel the need to do environmental and health impact assessments after what was essentially spraying weedkillers by the roadside. Judging from the lack of reports on our end over the years as well, it seems that if there were any effects from Trioxone use in Malaya, they weren’t that substantial. Maybe because nobody looked for the correlation, or maybe it’s because the chemical wasn’t used as much over here. We really dunno. ¯\_(ツ)_/¯