There has been news surrounding a tree in Terengganu that was transplanted from Brazil ever since February this year, most probably due to its hefty price tag.

The tree, a 3.5 meter silk floss tree (Ceiba chodatii) was reported to cost RM180,000 to transplant. Critics have attacked both Terengganu’s Menteri Besar Datuk Seri Ahmad Razif Abd Rahman and its state government on social media, claiming that the tree is a waste of funds.

This all happened in the district of Kuala Nerus in Terengganu, which is a new district established in 2014. Since its establishment, the new township of Kuala Nerus has been developed as a ‘Modern & Green City‘. Construction and landscaping is ongoing, and the tree’s addition earlier this year sparked an accusation that the state gomen was wasting money on exotic trees. But then it allegedly died… or did it?

Last week, the tree issue resurfaced when an article in Berita Harian claimed that the RM180,000 tree had died after 5 months of being planted.

The State’s Committee for Infrastructure, Public Utilities, Energy and Green Technology chairman, Rosli Othman had speculated that the tree could have died due to weather and soil incompatibility, and although the climates of both Brazil and Malaysia is similar, differences in weather can affect the tree here.

However, the report had been denied by the Terengganu MB himself, saying that the state government is considering legal action against those claiming that the tree is dead.

“Firstly, the tree is not dead. This species actually ‘hibernates’ and the leaves may have fallen off owing to the hot tropical weather and soil conditions. Secondly, we (the state government) did not purchase the tree and are not accountable for its upkeep. So please do not drag us into the controversy. The matter had been explained at length before and is considered closed,” –Datuk Seri Ahmad Razif Abdul Rahman, Menteri Besar Terengganu, from NST Online, as reported by The Malay Mail.

The statement was met with much skepticism from the public. Top-notch sarcasm from the comment section of a related article.

Sure, the term ‘hibernate’ may not be the correct term, but most of us do know that trees do shed their leaves once a year in places with four seasons, in autumn. But this is a tropical tree. Could it do that? Some tropical trees do shed all their leaves, but they’re not dying.

The MB stating that the tree is ‘hibernating’ might not be entirely correct, but it’s not entirely wrong, either.

Tropical trees do not usually shed their leaves, but some genera of tropical and sub-tropical trees do. The silk floss tree, or Ceiba chodatii, is one of them.

Trees that shed their leaves seasonally are called deciduous trees, and unlike evergreen trees that continuously shed leaves and grow new ones to replace them, deciduous trees shed off their leaves all at once before growing them all back again. This change happens seasonally, which means autumn/winter for temperate regions and dry season for tropical and sub-tropical regions.

Trees shed for a number of reasons, but they usually fall under the theme of saving water and energy. See, most deciduous trees have relatively broad and thin leaves that can be damaged by the coldness of winter and the dryness of the… dry season. When a deciduous tree senses danger to its leaves, it will salvage whatever nutrients it can from the leaves (chlorophyll first, which is why the leaves turn a different color before falling) and stores them in its roots before letting the leaves fall off. According to plant logic, it is a lot more efficient to just grow new leaves rather than repair the damaged ones.

After shedding its leaves, the tree will wait for the cold or the drought to end, storing its energy until it’s worthwhile to put out new leaves again. In a way, it does sound a bit like hibernation, but it’s not quite hibernation like how the bears do it. A lively Ceiba chodatii trying to escape its restrains. Source

But transplanting trees, especially foreign ones, is a risky thing. 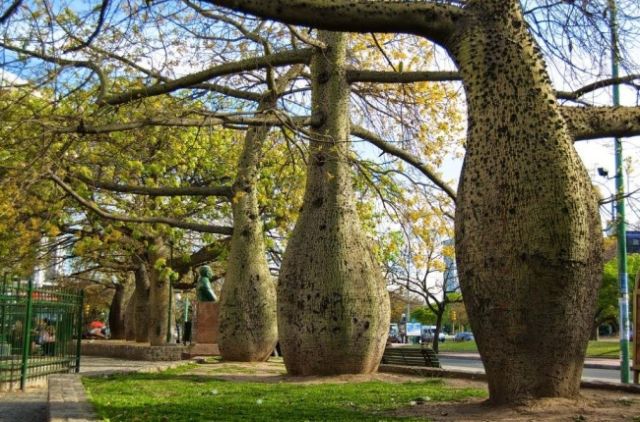 Transplanting big trees give the impression that a place is well-established and classy. Source

Trees, not unlike other living things, go through enormous amounts of shock and stress when being transplanted. Moving a tree requires careful planning and meticulous maintenance, as this 35-page guide from the Hong Kong Development Bureau tells us.

Too little water, not supporting the roots, transplanting during the hot season and about a dozen other things may end up killing the transplanted tree, as well as wasting the money put into moving it.

However, it would appear that the Terengganu contractors moving the tree know what they were doing, as the tree was confirmed to still be alive by Mohd Nasir Md Amin, the director of Sheby Global Nursery, which is the nursery tasked by the contractors responsible for developing the new township to take care of the tree as well as the landscaping of the town. Mohd Nasir had stressed that there would be no problem for the tree to grow in Malaysia. 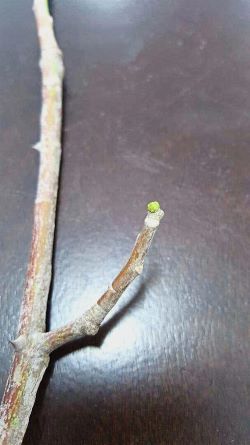 New shoots from the tree confirms that it is still alive. Source

While transplanting foreign trees may sound exotic, it comes with its own risks. Bringing in foreign species can sometimes disrupt the local ecosystem, often in ways we can’t predict.

A more recent example would be the case of the fruiting date palms in Kelantan a few years back. In 2014, the ornamental date palms planted at the Bulatan Jam Besar in Kelantan suddenly bore fruit in abundance, which is a first as they never did so in previous years. This isn’t an isolated incident, as other date palms planted in the state also started bearing fruit that year. This incident sparked a craze for date palms, with talks of date palm plantations and people wanting to plant it for themselves. Of course, whenever there is demand, enterprising people will find a way, and soon date palm seedlings are being smuggled across the Thai border. This is actually a bad thing, as they’re not only smuggling baby date palms, but also a pest that attacks it as well: the red palm weevil. The red palm weevil became a concern as even though we had our own palm weevils, the strain brought in was a higher risk as it multiplies much faster. There was a fear that the oil palms would be affected as well, so drastic measures were taken to prevent the spread of the invasive pest. At the height of its activity, the red palm weevil can be found in three northern states and both east-coast states.

Another well-known example of this is the acacia trees in Malaysia. In the 1970-80s, some species of acacia were brought in for several reasons, chief among them being as ornamental plants and as an alternative to timber. One of them, called the earleaf acacia (Acacia auriculaeformis) gained popularity as a roadside tree as it can grow on infertile urban soils and disturbed land such as mines. You may have seen it before: However, although the acacia is no longer as popular as a landscaping plant, due to its resilience and fast growth it now grows wild and out of control in open spaces in some Malaysian cities, rural areas and forest fringes, and some have found their way into national parks and conservation areas.

All in all, foreign plants can definitely add character to the landscaping of a place, but they can be scary if they get out of control.