Who here is a Grand Prix motorcycle racing (a.k.a. MotoGP) fan? If you are, then you’re definitely one of the cool kids! But if you’re someone like this writer who has only seen the word MotoGP from news headlines, then you’re probably only familiar with mainstream names like Valentino Rossi.

However, Malaysia does have her homegrown talents too. One notable name is Hafizh Syahrin Abdullah, who is the first Malaysian AND Southeast Asian to participate in the MotoGP race. And this is all made possible by the sponsorship from many parties, one of them is UMW Grantt International. This is Hafizh’s second year receiving support from the manufacturer of Grantt Lubricants in his career as a MotoGP rider.

But as with any legendary figures, Hafizh surely has to start his career somewhere, right?

It all began in a small workshop in Ampang…

As an 8-year-old, Hafizh used to spend a lot of time at his father’s workshop in Ampang, Selangor.

“At that point we had no home! So I went to school from there, ate there, everything.” – Hafizh, in an interview with Monster Energy.

He started to take interest in pocket bike races, known as MiniGP when he was 9. Pocket bikes are basically really small motorbikes – they’re a quarter the size of a regular motorbike!

So, a pocket bike race would look exactly like what you imagine a MotoGP would look like… only with teeny-tiny bikes.

Hafizh and his father toured around Malaysia to participate in the MiniGP. They only traveled by car with his bike at the back of it, and even slept in the car instead of a hotel as they didn’t have enough money then. Seeing how difficult it was for him and his father to move about this way, Hafizh became determined to be a professional rider.

“I want to be a professional rider and I want to be the best rider in Malaysia.” – Hafizh, as quoted by Monster Energy.

Little did he know, he would soon be getting what he wished for. After participating in several pocket bike races, he eventually revealed his potential and talents on the racetrack. Not only did he conquer the racetrack by winning several races – earning him the title ‘King of Pocket Bikes’, he also caught the eyes of professional teams. He stepped in for a professional rider in MotoGP when he was just a ROOKIE!

Upon joining the PETRONAS team, he got to brush up on his skills by participating in several local and international championships. In 2007, and at an age where most of us just got the privilege of using a calculator in secondary school math class, Hafizh debuted in the Malaysian Cub Prix championship.

Aside from the Cub Prix, Hafizh also competed in the Asia Road Racing championship in 2010 against experienced riders. Although he debuted in the race at 12th place (out of 39 riders), he managed to finish fourth in the same series in 2011. And this made him the youngest rider to have ever done so! In 2012, he eventually made his debut in Moto2, a category under the MotoGP series. Despite being a wildcard, an entry oftentimes given to non-contracted riders, he made his way to fourth place.

But his real zaman kegemilangan started in 2014 when he became a full-time Moto2 rider where he:

In fact, 2017 was said to be Hafizh’s most impressive year. As the national Moto2 rider, he even earned a new nickname: Pescao (meaning small fish), thanks to his riding skills in the rain. You can watch his skills in this video:

Seeing Hafizh’s achievements, Barry then decided to call up sponsors to get Hafizh into MotoGP. He thought to expand Hafizh’s horizon instead of letting him remain in the same class and series.

This was when Hafizh moved up to the premier class with the Monster Yamaha Tech 3 team. What’s interesting with Hafizh’s debut in the MotoGP series was that he was still a rookie when he stepped in for professional rider Jonas Folger.

This in turn made Hafizh the first Malaysian MotoGP rider! MotoGP say wan ah, not us, ok?

UMW is fueling Hafizh’s journey as a professional MotoGP rider Anas (second from left) and Hafizh (second from right) in the recent press statement about UMW’s collaboration with the Moto2 rider. Img courtesy from UMW

As Malaysia’s first MotoGP rider, Hafizh only faced more challenges to give his best performance on the racetrack. He fought hard for the Rookie of the Year and managed to take some incredible top tens in 2018.

However, as with any other regular human, he eventually saw a hiccup in his career. In the same year, for instance, he lost to another rider, Franco Morbidelli. And worst of all, he was involved in a crash while competing in the Austrian Motorcycle Grand Prix in 2020. Luckily, he survived it and is now back to racing.

Despite all these adversities, it seems like Hafizh is far from backing down. With support from local companies like UMW Grantt International, Hafizh aims to get back on track, although his focus in 2021 is leaning towards Moto2 instead of MotoGP. 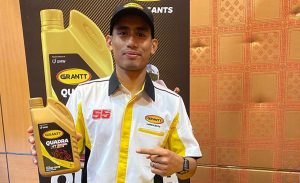 His wishes were… Grantt-ed *ba dum tss*. Img from Motomalaya

“We’re excited to be involved in the development of the Malaysian motor industry. We’re providing our full support to Hafizh’s participation in the 2021 Moto2 Championship through this sponsorship.” – as quoted by Sinar Harian. Translated from BM.

This collaboration is also an opportunity for UMW to introduce Grantt Lubricants internationally. Sounds like a win-win situation, innit?

At least for Hafizh, who now races with the NTS RW Racing team, this collaboration really drives him to perform his best. He finished 9th place in the 2021 Italian Grand Prix, and it’s said to be his best achievement with the team so far.