By now most Malaysians should be familiar with Alvivi, the collective name of local sex bloggers Alvin Tan and Vivian Lee. The pair have been mounting legal charges, among other things, which started from an incident back in 2013 where they porked a Hari Raya greeting with a photo of themselves posing with a pot of bak kut teh and a halal stamp underneath (Note: not actually halal) (Note: forced innuendo quota fulfilled) Image from the Malay Mail Online. Click to link to article.

This hasn’t been a bad year for them though… they managed to dismiss one of the three charges filed against them – Section 298 of the Penal (heheh) code, get an offer to shoot a documentary based on their lives in Singapore, a judge who allowed their passports to be released on bail to travel to Singapore for said documentary, and a plane ticket for Alvin to jump bail and seek political asylum in America. 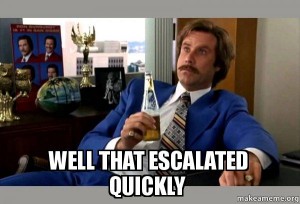 But what’s interesting is that after a period of silence, Alvin is back online and proudly displaying pictures of his Alweewee in America. Being that he’s back on Facebook and throwing jabs at the Malaysian authorities and politicians, we kinda wondered if there was a method behind the madness. Like sure, it’s easy to conclude that he’s an attention-seeking coward trying to compensate for running away; but what if there’s something more to that? What if Alvin Tan is the new penetrative force of free speech much like how Raja Petra Kamarudin was seen as in the mid-2000’s but with less clothing? What do we even know about this dude? And more importantly, is there anything we can learn from him?

And since we decided to not contact him for an interview, we decided to prowl his Facebook page instead. These are the lessons we’ve learnt:

1. To seek political asylum, just say “Hi” to a US Border official

So in case you were wondering, how he managed to get to the US while under arrest, he’s recently explained it in this interview with a Singaporean blogger.

He pretty much just took a plane flight from Singapore to Mexico, walked up to the Border official and said “Sup bro. Can I has political asylum pls?” (May not be actual words). After spending about three and a half months in detention, he was eventually given the chance to be released on bail (again) with permission to be in the US while his case was being reviewed.

In case anyone’s thinking of doing the same, please do note that having widespread media coverage might help a little in this regard.

But no really, don’t do it. Even Alvin himself cautions against it:

“So however you plan to migrate, scratch out the idea of cooking up a false case of political persecution. It has so many loopholes that it is almost always bound to fail. It only happened for me through several very fortunate strokes of luck, and I doubt I can ever replicate it again. Your best bet is still to be skilled and educated enough so that people are willing to sponsor an employment visa for you … or marry a foreign citizen.” – From Alvin Tan’s Facebook post

To be honest, we always thought that Alvin would be the super Cina type – perhaps like your typical Apek Klang – but we were surprised to find that he’s actually pretty articulate. If you’ve already read that interview, you might find his points pretty compelling. Heck, this writer even found himself spending more time than he should reading Alvin’s notes on Facebook because they were well-structured, well-thought out, and well-argued.

Then why do most of his more viral pictures and quips come out so… Cinapek? Well, this screenshot might explain it:

Beyond that, he’s also written a tell-all book which is currently sold out.

Hmmm… Maybe he should write for CILISOS.

3. Alvin Tan is not a Cinapek

Well, we suppose it’s arguable what the definition of a Cinapek is, but he apparently did not grow up speaking Chinese and learnt it from scratch.

So if anything, he’s a reformed Banana with newfound respect for the language. At least enough to come up with this short film: Alright. Well, for those who haven’t been following the Alvivi antics from before, Alvin and Vivian have made a couple of short films on their YouTube channel. Here’s the “Chinese” one from above:

5.  Alvin Tan will cucuk you from afar

So now that he’s in the States and trying to start a new life, you’d think the best strategy would be to keep a low profile and hopefully disappear from the public eye. But nopeeeeeeeee….. on September 27th, he posted this:

You can view the uncensored image at his Facebook page cause we didn’t make this. Please don’t sedition us. Wheeo wheeo

with a note to government supporters on his page to not bother alerting those in the picture to pile on the sedition charges – he went and tagged them himself.

6. Alvin Tan will cucuk you for real

So now that he’s in the States and trying to start a new life, you’d think the best strategy would be to keep a low profile and hopefully disappear from the public eye. But nopeeeeeeeee….. because he posted his American to-do list, partially consisting of Americans to do: But we suppose that’s to be expected cause he apparently has a pretty high quota when um….. doing the naughty. We had to censor the details, but you can find it on his page to um… fill yourself in on the details. 7. Alvin Tan will edujimacate you

So all the way in the second point, we have (hopefully) established that Alvin has a pretty good way with words. He does also put this skill to good use by writing observations, ideas, and lifestyle tips that, while not Buzzfeed-worthy mindblowing *cough*, can make the reader go “oh wow, that makes sense!” Here are some excerpts which you can click on to read in full: Clicking that image won’t do anything

Well…. maybe. But that’s really because we’re taking everything from his Facebook page. What his Facebook page doesn’t say is what happened with Vivian. In an interview with Astro Awani, Vivian has claimed that they were still seeing each other before he ran off in May, which she claims she didn’t know about. So basically he left her high and dry to be tried in court for something they were both equally responsible for.

Actually, we wonder if they were both “equally” responsible for it. It could be a case where one was calling the shots and one just became a submissive accomplice. It’s something we’ll never know for sure, but what we DO know is that Alvin Tan is currently in America with a chance of starting life anew, as he’s always wanted to do. And we’re thinking that it’s also highly likely that we won’t hear the last of Alvin even if he DOES get asylum – he enjoys the attention too much.

And as for Vivian Lee who’s still awaiting trial for the remaining two charges and his mother who posted the RM20,000 bail for him, well, they’re still here.