Okay, just so you don’t accuse us of clickbaiting, this article isn’t about a Malaysian actress in the latest James Bond movie, but rather about a Malaysian actress acting with Dame Judi Dench in a different production, mostly because her character, “M“, died in the previous Bond movie Skyfall (Spoilers!). Oh and also,the featured image is actually Judi Dench and her daughter. Vera’s told us that the theatre company has a strict policy regarding photos, so no selfies!

Back in August, we met Vera Chok, a London-based actress who shared how she went from Assunta schoolgirl to performing Shakespeare with Judi Dench.

If you haven’t heard of Vera Chok before, we don’t blame ya. This Malaysian-born actress, writer, and artist has been out of the country for the past 21 years, only coming back for the occasional visit. But we’re beginning to sound too much like an artsy-fartsy magazine now, so…

By the time you’re reading this article, Vera would have been sharing the stage with Judi Dench in William Shakespeare’s A Winter’s Tale, directed by and also starring Kenneth Branagh; whom you might remember as Gilderoy Lockheart from Harry Potter. Oh, and she’s also been in a movie with Drew Barrymore! #namedrop Vera with Chak and UiHua at Ye Olde CILISOS office.

During our interview, Vera mentioned four things about her journey as an Asian actress in London which caught us by surprise, starting with the fact that…

*BTW ugaiz, the featured image is actually Judi Dench and her daughter. Vera’s told us that the theatre company has a strict policy regarding photos.

1. She actually studied to be an Archeologist!

“It never crossed my mind that [acting] was possible. I didn’t know anyone in the Arts and there were no performers in my family.” – Vera Chok, in interview with CILISOS. Vera in The Word of Extreme Happiness (2013). Image from Girl Ignited.

Yup, make no bones about it, Vera actually has a degree in Archeology and Anthropology from Oxford University. And, from what she says, she did pretty well in class too. So how did she end up on the stage instead of posing with dinosaur bones on the Discovery Channel?

Well, for the most part, it was because she didn’t know what she wanted to do. Or at least, she knew what she wanted to do, but she didn’t know how she was going to do it. Y’see she got involved in drama at Oxford, which led to her harboring dreams of becoming a director; but upon graduation, she ran into a problem most of us have when pursuing our dreams – She didn’t have no money, yo.

While most of us would have given up (or given in to our parents asking us to get a proper job), Vera kinda just took up random odd jobs in offices and restaurants while trying to figure out how to pay for drama school.

2. She got into acting school… thanks to an auditing firm!  😯

“After years of being super poor, a friend referred me to a company looking for auditors – they weren’t very picky. I was like, fine, it’ll be a social experiment”

The “social experiment” Vera’s referring to was to get a secure job and “do what my parents told me to do”. She was 27 years old by this time. In order to get the job though, she had to enroll for a course at an accounting college and, by coincidence, there was a drama school next door! This was The Poor School (no really, that’s the name), which offers acting training at the lowest possible cost. And so Vera signed up for a 2-week course.There was an advantage to this course too: The school usually awards standout students with a placement in the full programme. She was also pretty confident that she’d get it, since her course mates were telling her that she’d “definitely be offered a place”.

She wasn’t offered a place.

According to Vera, she “freaked out” and when she asked why she wasn’t offered a spot, she was told that she “didn’t have the personality” and was “a bit too emotional and not strong enough”. And while some of us (like this writer) would have probably gone home to cry, Vera actually auditioned for them again – and this time, she was accepted.

While we might be tempted to think everything was smooth sailing from this point on, it isn’t. In fact, it’s just the beginning because…

3. Being an actor is tougher than you’d think (Especially if you’re Asian)

“For three years, I was running from my full time job to acting classes in the evenings and weekends. I didn’t get a lot of sleep in those three years.”

Vera said that, not being particularly rich, juggling between her job and acting school also trained her to lead the hard life – something most people probably wouldn’t associate with an acting career. Here are a couple of the challenges she faces on a regular basis:

A constant fear of being unemployed 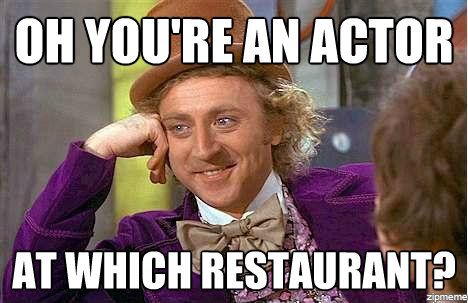 Vera tells us that as an actor, you don’t know when your next job will come – even if you have years of experience under your belt – so sometimes you kinda just have to take any job that pays the bills in the meantime. She tells us about a lady at the National Theatre whom, despite being a TV star and being in the industry for years, would still “work in a shop when things are slow”.  Vera herself won’t be employed past January, when A Winter’s Tale ends its run.

On the bright side though, she says that you CAN earn a living being in the performing arts in London, something that most Malaysian actors won’t have the luxury of saying. Serious, you’re better off working in McDonalds than in Malaysian theatre.

Being at constant risk of stereotyping The role of Asians in Hollywood has been something that’s been criticized for years, but it’s something that happens across the pond in jolly ol’ England as well. It’s also a pet peeve of Vera’s. She describes Asian men being cast as kung fu fighters or triad members while Asian women are illegal immigrants who have been forced into prostitution. She says she’s played three illegal immigrants so far – once on TV, once on radio, and once on stage – and have attended auditions casting for similar roles (She usually doesn’t take them).

However, she did add that theatre productions are usually more colorblind but there have been instances where white actors were chosen to play Asian roles. She mentioned an example of a Chinese play staged by the Royal Shakespeare Company in 2012 where the lead roles were entirely played by white actors. In fact, this generated quite a bit of outrage because there were only three Asian actors in the cast – playing a maid and a dog puppet.

But hey, at least they (kinda) stopped doing Yellowface This is rearry rearry racist!

“When Drew Barrymore walked into the room, all I could think was, “OMG! She’s like the SUN!” I couldn’t look at her directly! She was everything I thought she would be!” – When Vera was on the set of Miss You Already We realize we’ve been a negative nancy so far, but there are of course perks that come with being in the performing arts. For one, you get to meet and work with people that you’d usually only see on the audience side of the screen or stage. So far, she’s also goofed off with Benedict Wong who was recently in The Martian:

“My happiest job was working on Chimerica with Benedict Wong. One of the many fantastic memories is of the entire happy cast, crew and front of house staff jumping up and down on stage, busting moves to Get Happy, so much so the stage bounced.”

Worked in a Chinese takeout with David Gyasi (Interstellar):

“I LOVED filming my scene with David in a cold back room of a real life Chinese takeaway in my beloved East London, working round actual orders and curious customers! He’s a gent and a sweetheart.”

And just becoming starstruck like the rest of us would be:

“When I went for my casting with the lovely and approachable Kenneth Branagh I was nervous as usual. … At the end he cracked a joke and laughingly I playfully cuffed his arm before instantly screaming inside, “Whyyyy did I just touch Kenneth Branagh’s arm??!!!! Aaagh!”

And then there’s the joy and pride of being recognized for your work, like being nominated for the best debut performance in the BBC Audio Drama Awards. Or just being recognized in public, cause that’s always nice too 😉

So if we’ve learnt anything from our interview with Vera, it’s that…

“It’s a bit of luck, but you also have to be reeeeeeeeally prepared to make sacrifices” In the hour and five minutes that we’ve interviewed Vera, the two main keywords that kept popping up were “hard work” and “luck”. She’s mentioned that she was lucky to have found herself a good casting agent not long after she finished her acting course and to have been offered a job very early on at the by Malaysian-born director Vik Sivalingam for a Deepavali show tour around the UK.

However, that doesn’t discount the work she’s put in to improving herself artistically, by producing and/or shooting short films (Click here to watch one of them) and doing performance art to build her resumé, and taking additional courses – she’s currently taking a Master’s Degree in Writing. And then there’s the time she puts into connecting with other people and building relationships:

“It’s not helpful to be closed off. We have to support each other and get better. It sounds really hippie but it works!”

As a parting note, we asked Vera what she would say to anyone looking for a career in the performing arts:

“I would spend some time with them and ask what they know about the industry, and what they want out of life because I don’t believe in an artist saying “I’m just going to live on air”. You must always do your research… Whatever you can do to bring yourself closer to the people that do the kinds of things you want to do.”

Share this article:
NAH, BACA:
NO. WAY. The original 007 was a spy living in Cameron Highlands?