Hello and welcome to the CILISOS Conspiracy Corner. Today we’re going to dive deep – so deep we’d reach the other side of the planet – into a topic most Malaysians have been affected by. A topic all 12-year-olds have cried a river over, a topic that has turned the black hairs of parents grey, a topic so dreaded we only refer to it by its initials… The UPSR a.k.a. Ur Peperiksaan Stress Revisited.

Here’s what we know for sure…

For those who don’t know, the UPSR is THE life of all Malaysian primary school kids. It’s everything these lil’ guys have been studying for, being told that their life pretty much depended on it.

As students sat down for their exams this year, some did so with a little more confidence than their friends. It wasn’t that they studied harder or were smarter, oh no. What they had was a smartphone and WhatsApp. (Seriously, at 12 years old?!) And apparently, photos of the exam papers were being distributed up to a day beforehand. With every paper for every subject seemingly compromised, students nationwide are to re-sit the papers and go through the stress all over again. In the meantime, the Education Ministry is doing their best to investigate and to come up with a solution to the 473,000 students and 946,000 parents unwittingly caught in this fiasco. Yes, we are assuming each child has two parents.

Deputy Prime Minister/Education Minister Tan Sri Muhyiddin apologised to the students and parents for the stress they have to relive, but not everyone was satisfied with it. Johor DAP deputy chairman, S. Ramakrishnan argued that the Education Minister was always apologising for the leakages but the problem kept recurring, referring to the alleged SPM leaks from 2013.

But hey, those are the grown-ups talking. What’s a story without a say from the immediate victims? Jia Jieh, the kid on the right, told us this:

“I’m sad! Angry! I have to sit for Science and Maths again. I already got A for Maths. My teacher marked my paper and I got 36 correct, so that means I actually got A.” – Sim Jia Jieh, 12

And his dear mother:

“Now he has to wait 1 whole month before he can re-sit his papers. Because of that he has to study all over again, so he won’t forget everything he’s learnt. I even bought new books for him to practise.” – Josephine Tan, Jia Jieh’s mother

As the police and MOE are conducting their investigations, other parties are beginning to present theories of their own. Theories which can either be complete nonsense or the actual truth that some people in position of power will not want you to know.

So whip out those tin foil hats and follow us down this list of 5 probably-maybe conspiracy theories about the UPSR leaks:

To date, 10 out of 14 people arrested in connection to the case are teachers from Tamil schools. The Hindu Rights Action Force, better known as Hindraf, are claiming that this is an excuse for a racially-driven witch hunt. Suspects at the Putrajaya magistrate court. Image from Azinuddin Ghazali on themalaymailonline.com

Sounds ridic? Well here are some of the major points brought up by Hindraf Chairman P. Waytha Moorthy:

Theory #2: “There’s a secret syndicate run by a network of school teachers!”

In an interview with The Star, Minister of Home Affairs, Datuk Seri Ahmad Zahid Hamidi stated that the police are not ruling out that there could be a syndicate of teachers and other figures within the education system that could provide certain parties with exam papers. Later in the same day, however, he stated that the leaks were NOT the work of a crime syndicate after all. (This was reported by The Malay Mail, The Malaysian Insider, Malaysiakini and Bernama.) Is this an update to an ongoing police investigation? Or perhaps this could just be a play on words, since a “network of school teachers” is not necessarily a “crime syndicate“.

Theory #3: “Someone wants to kenakan Muhiyiddin!”

Tan Sri Muhyiddin Yassin was reported as being visibly upset over the leaks during his trip to Vientiane, Laos for the 8th Asean Education Minister’s Meeting. The leaks aside, he has reason to believe that it could’ve been carried out by shadow parties with intent to sabotage him personally and the Education Ministry.

Although he was not making any assumptions as to who might have been responsible for the act, he wants the police not to rule out this angle. If true, the conspirators face jail time between 1 to 7 years, according to Section 8 of the Official Secrets Act.

“I consider this an act of sabotage out to affect my integrity and that of my ministry.” – Tan Sri Muhyiddin Yassin 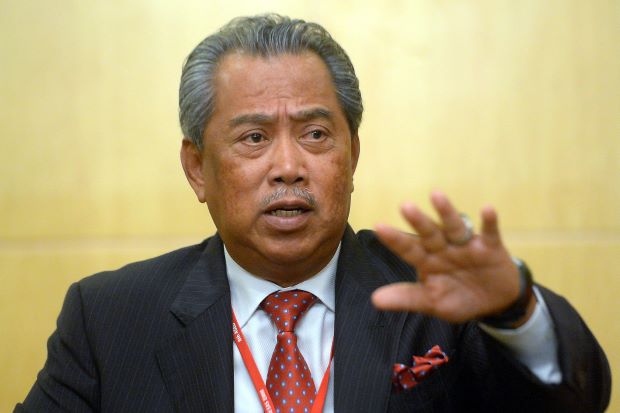 Throughout the whole snafu, it’s the schoolteachers who’ve come under heavy scrutiny. However, there’s another theory that traces the leak straight to the source: the printers. It makes sense, since UPSR and PMR papers are printed locally while SPM papers are printed at the University of Cambridge, UK. While we don’t know how the process is like at the printing press, it isn’t too hard to imagine someone sneaking off with a copy or a couple of photos on his smartphone to earn a few extra bucks.

Check out the process of how exam papers are prepared: We did this with MS PowerPoint and Paint. Jalan tak? (Points derived from NST, click to read more.)

We should also keep in mind that the examination board follows an 800-page manual of standard operating procedures to prevent leaks, as demonstrated by Second Education Minister Datuk Seri Idris Jusoh who held up a package of what looks like a double sealed bag of sealed bags. 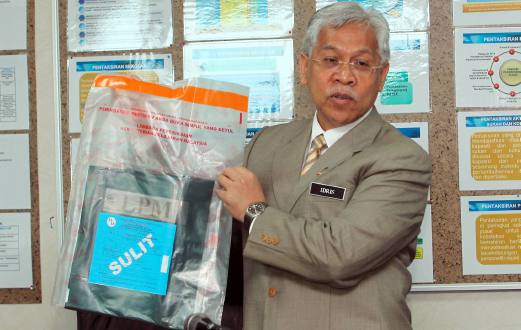 Sealed for freshness. Image from nst.com.my

With this level of scrutiny to security, and that the photos of the leaked questions were on printed paper, we can only logically conclude that the leak must have happened before or during the bagging process. The Education Ministry has suggested that it might consider printing the UPSR papers overseas next time; which was of course met with a flurry of snide humour… 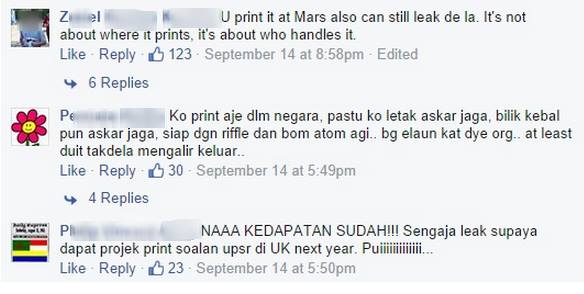 …and even a comic strip meme. Theory #5: “School staff are getting paid to cheat!”

In the pursuit of academic excellence, the government rewards schools who perform splendidly in public exams with monetary incentives. This initiative is called New Deals, of which the criteria includes school GPA scores based on public exams results (i.e. UPSR, PMR and SPM). According to the New Straits Times:

So is it possible that schoolteachers leaked the papers for the incentives? Or could they be just people looking to earn extra cash in selling those papers? Or perhaps – just perhaps – the school, its teachers, and students get ‘fame’ and ‘success’ if they become top-scorers. This last reason could very well be the biggest motivator, explained Professor Datuk Dr. Shamsul Amri Baharuddin of the National Professors’ Council:

“The strongest reason why some people take advantage of the examination by making money from it is because everybody wants to succeed in academia.” – Professor Datuk Dr. Shamsul Amri Baharuddin, The Rakyat Post.

So many theories, so little brain cells left to think.

With 5 conspiracy theories laid out, which do you think is the real story? Was it a government ‘covert operation’ to incriminate Tamil schoolteachers? Was it Muhyiddin’s ‘career and character assassins’? Maybe it’s just as simple as greed for money and success that drove perpetrators to the crime. Is there more to the story that what we think? Is that what they wanted us to think? Or is THIS what they wanted us to think? Do we really know anything? Is this the real life or is this just fantasy?

We’ll never know for sure, so we’ll have to wait till the real bad guys get caught. Hopefully.

Share this article:
NAH, BACA:
First Malaysian ever to win the Iclif Leadership Energy Awards used to be a pimp in his teens