Okay, not the best haiku, but you’ve probably heard of all these local terms describing Caucasians. Angmoh is a Hokkien term that means ‘red hair‘, while gweilo is Cantonese for ‘ghost man‘. We won’t go into the whole racial-slur and negative connotation argument here, because our interest today is purely the origins of these terms. Of interest is the third one: Mat Salleh.

Why do we call white people Mat Salleh? Most of us probably know of a Mat Salleh who was a figure in the Sabahan rebellion around the 1890s, and while he is a strapping fella… …Mat Salleh was actually his real name: Datu Muhammad Salleh. We feel that it’s unlikely that this Sabahan Mat Salleh had anything to do with why Malayan people call white people Mat Salleh, so as usual, we dug around a bit for answers. While we couldn’t find a conclusive answer, there is a popular theory floating around the interwebs…

‘Mat Salleh’ may be a corruption of ‘mad sailor’

Several versions of this story are available online, but as far as we can tell, all of them can be linked back to a single newspaper clipping from 1992, where a person named Ani Arope from Kuala Lumpur wrote to the New Straits Times to offer a possible origin of the term ‘Mat Salleh’. In his letter, Ani deducted that the term started in Penang, where the Malays there had been colonized by the British for some time already. Therefore, they had this perception that British people are the paragon of perfection, but that would soon change.

Probably what the locals saw at the ports of Penang back then. Gif from Giphy.

One day, a British warship docked at Butterworth to refuel after being at sea for three months. Understandably, the sailors on the ship let loose their rowdiness upon reaching the town, and the local Malays were shook at their behavior. They mentioned this behavior to the British resident, who told them not to mind these people as they were a bunch of ‘mad sailors’. To the Malays, the term sounded a lot like ‘Mat Sallehs’, and from then on the Malays adapted Mat Salleh to refer to all white people.

While we cannot find any evidence to support this single letter written to a newspaper, Ani Arope is a pretty unique name, and a quick Google search showed that there’s a Tan Sri Ani Arope, prominent businessman and former CEOs to TNB and Guthrie. More importantly, he lived from 1932 to 2014, and he was born in Seberang Prai, Penang. He would have grown up in British Penang, so if this letter was indeed from him, there might be some credibility to this story. 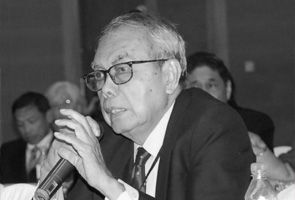 Ani Arope passed away from cancer in 2014. Img from Astro Awani.

Also, Malaysians corrupting English words and adapting them isn’t really an uncommon story. For example, Tamparuli in Sabah was said to be named that because the locals misheard a British officer telling them that a bridge there is ‘temporary’. So ‘mad sailors’ being misheard and adapted to this very day isn’t really that impossible. Still, we had another theory…

It could be a Malay way of saying ‘strange man’

As you can tell from the Sabahan Mat Salleh from the beginning of the article, the ‘Mat’ in front of the name is a contraction of ‘Muhammad’, a common Malay name. But among Malays, ‘Mat’ had commonly been paired with an adjective/noun to refer to a guy, or a group of guys, even if ‘Muhammad’ is not involved. For example, if you’re a goat farmer and you moved to a new Malay village, there’s a chance you’ll be called ‘Mat Kambing’ or something, meaning ‘that Mat that sells kambings’. A popular kind of Mat. Img from Borneo Today.

Mat rempits of Malaysia and Mat reps or Singapore also follow this pattern: these are Mats who rempit and rep, whatever those terms mean. So what’s ‘Salleh’ then? Well, it might be a misspelling of either ‘soleh’, meaning pious, or the more obscure ‘salih’, which means ‘odd’ or ‘out of the norm’ or simply ‘strange’. The latter is more likely, so in this sense, white people are essentially ‘those weird Mats’.

So… mad sailor, or strange Mat? You be the judge.

Share this article:
NAH, BACA:
The strange story of a M'sian MP who allegedly killed his rival with black magic in 1982