Disclaimer: Cilisos does not endorse putting your own hard-earned money into the game ya. Cryptocurrency prices are extremely volatile so putting your life savings into it can be very dangerous. Before starting, please do your own research cause obviously people who have a good experience will obviously say good things right?! Okthksbai ini bukan sponsored content.

Growing up, gaming used to be an aktiviti tidak berfaedah for remaja bermasalah. That is, until multimillion dollar gaming competitions like Dota 2’s The International happened, and it’s now an aktiviti berfaedah… if you’re good enough to be in the top 0.00001% of the player base. How winning multimillion gaming competitions transforms you. Image from Reddit.

But what we found out recently is that you don’t have to be the absolute best to earn money from gaming. You just have to be an okay gamer, who’s willing to spend 2-3 hours a day playing it.

Axie Infinity, a game that looks similar to Pokemon, can actually earn you some decent money from it. In fact, some Malaysian players are regularly making between RM1000 – RM2000 per month playing it. But there’s a catch: you need to pay RM4,000 in cryptocurrency or even more to start playing.

Eh? Is this some MLM scam or what? Curious, we talked to 3 Malaysian Axie players about their experience playing the game.

But before that, let’s look at what the game is all about.

TL;DR: It’s like Pokemon, but gila mahal to start playing The game created by Sky Mavis, a Vietnamese company, revolves around these Pokemon-like creatures called Axies, which you can battle, breed, and trade. There are 6 different types of Axies and 3 secret types, which are stronger or weaker than the other depending on the matchup. 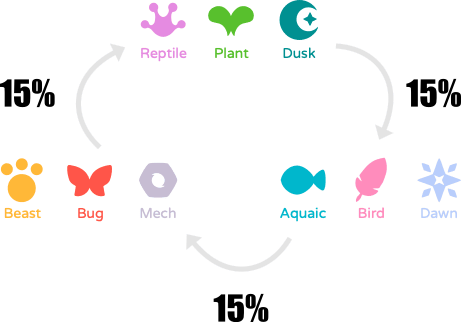 They each have 4 different abilities in the form of cards, which will be given randomly when it’s created. You can even breed different types to get a hybrid, but the results can be a bit mixed.

But what sets this game apart is the economy, which is based around the cryptocurrency Ethereum. To play the game, you’ll first need to buy three Axies which are actually NFTs (Non-fungible tokens) to make a lineup, and you can only buy it with Ethereum. Once that’s done, you can then start playing the game which has two main components:

In both modes, you can earn Smooth Love Potions (SLP) from winning the match, which are the in-game tokens that all the players play for, and can be exchanged for cash at a crypto exchange, or used in-game to breed more Axies.

The Smooth Love Potion everyone is grinding for. Image from Asia Crypto Today.

But the amount of PvP games you can earn SLPs from are limited by the “energy” you have. Every day you’re given 20 energy, and each match will use up 1 energy. If you run out, you can still play but you won’t earn any SLPs from it. So you can’t just make unlimited money everyday la.

But the entry price can be reaaaaally steep. A cheap but not terrible Axie could cost you around $300 – $400, so to start playing you might need to spend at least $1000 (RM4,000) in Ethereum. But this is considered a budget option for this pay-to-earn game, as really good ones could even go into the tens of thousands. For reference, the most expensive Axie ever sold was for $130,000. These are considered the budget ones. Screenshot from Axie Marketplace.

Even at the lowest end, you might think, “Gila sial, RM4,000 to play game???” But we found someone who did just that.

Earnings are lower now due to crypto prices and game balancing

Aron started playing Axie Infinity part-time around May this year after he was convinced by his brother who had been playing it. Putting in RM4,000 from his own savings, he then asked his brother to choose the Axies for him, since he didn’t know much about the game.

But he memang kaki game already, and within the next month he nearly earned back his initial investment, making RM3,600 worth of SLP from the game.

You could earn SLPs by winning matches against other players, but for the noobs, the more reliable option was to play PvE and complete daily quests, which could net you 150 SLPs. But that type of earning for the regular player might not be possible anymore.

Basically, the easier way to farm SLP was halved to control the value of SLP as well as encourage more player battles. But against players, you’ll likely meet stronger, more expensive Axies, and Aron’s cheaper Axies do get overpowered by them.

“I wouldn’t say they were bad Axies… But after [playing PvP] I realised, “My Axie sucks” [against other players]. How to [climb MMR] like that?” – Aron

But if you takde duit for even cheap Axies, you actually can play without spending money because…

NAH, BACA:
6 Malaysian bloggers who amazingly had the same formula for success

You can find sugar daddy/mommy to sponsor you There are actually organisations that will offer “scholarships”, where a sponsor will rent you the Axies in exchange for a cut of your SLPs.

Wit Nie and Myo are two players who have signed up for this program, who both heard about it from a friend. Their jobs were affected by the many lockdowns, and they saw this as a consistent side income.

But they started only recently during the downward trend, where one SLP is now around 0.07 cents – nearly a third of where it was just a few months back. They also had to consider the cut taken by their sponsors – for Wit Nie, it was 50% of her SLP earnings, while Myo’s was a flat rate of 75 SLPs per day.

You might notice that 75 SLP is quite mahal, especially if you consider that the easy earnings are now exactly 75 SLP. But Myo thought that it incentivised him to earn more in the arena, and if he plays well, he could still earn enough after deducting the fees.

“It’s more like an incentive as well, because it’s a flat rate. [I can] increase my earnings by playing better [at PvP] and earning higher MMR… if I reach 1500 MMR each win will be 12 SLP. Probably around this much. Image from Financial Times.

Right now, for the average player, earning RM1,000 after tolak all the fees per month is still decent, even if it’s not as high as if you invested your money. Plus, you don’t have to keluar your own duit to start playing the game.

But if you’re a new player, your sponsor will likely just give you some average Axies to use. But just like a regular job, if you perform really well, they might just upgrade your Axies, allowing you to climb even higher.

“When they give it to newbies, since it [costs] a lot of money, they tend to give very basic [Axies]. Just enough to have a 50% winrate [in PvP].

But to climb that hard with very mediocre Axies is not easy at all!” – Wit Nie

Even though you don’t have to invest money, you do have to invest time to play this game. If you’re new, expect to spend around 6 hours playing it. The time spent can drop to 4 hours, and potentially 2 hours once you pro.

It’s more of a full time job than a game

At some point, you’ll hate this starting screen… and the repetitive song playing.

Despite talking mostly about the financial side of the game, cause we know that’s why you even clicked the article, the game is actually pretty good, if a bit straightforward.

“I think it’s good, it makes you think… In PvP, your enemy will have 3 axies with 12 different abilities – so you have to think, what’s he gonna do?” – Aron

But with this game, you can’t take a day off. You’re given a limited amount of “energy” daily to play the game modes, so there’s that psychological feeling of losing your chance to earn.

And if you’re under a scholarship, there’s a chance that they’ll revoke your account if you’re not performing. After all, there’s money on the line and hundreds of people waiting behind you for a chance. The game is not for everyone, because it can feel like a chore at a certain point, especially if you’re playing it again and again, and playing for money does sour the taste of gaming for some. But if your work isn’t too demanding and you have the energy and free time afterwards, they do recommend playing it.

“[For scholarships] At the beginning, you might have some difficulties, and there’s not a day where you can take off. So [even] if you’re tired from work already, you still have to put in 2 to 3 hours a day.

So if your day job is difficult, I don’t recommend it, [unless] they’re kind of free or need some pocket change.” – Myo

But then after carefully setting aside time, grinding a set amount, and researching to get better, you might realise at some point it stops being a game. It’s now a job.

Disclaimer again: Cilisos does not endorse putting your own hard-earned money into the game ya. Cryptocurrency prices are extremely volatile so putting your life savings into it can be very dangerous. Before starting, please do your own research cause obviously people who have a good experience will obviously say good things right?! Okthksbai ini bukan sponsored content.