Selamat Hari Raya everyone! Or at least it should be somewhat close to Raya by the time this article gets published  😀

Last year, I puasa-ed for two days (!!!) and, admittedly, had no idea what I was doing so it was quite a tough process. Thankfully, many of our Muslim and NON-Muslim commenters provided tips that I wish I knew before I started last year’s attempt. So I figure that this year, I’m prepared enough to do it for a whole week. #macambanyaktapibukan #lagakmacho.

But we’re switching things around a little this year… for each day of my puasa, I’ll be spending Iftar (aka buka puasa) with a different person each day. During this time, I’ll be getting more tips from them and, if possible, their views on fasting and Ramadan. I’m also looking forward to this because it’s… Of course, I should probably tell ugaiz a little about myself and give the ever-famous CILISOS disclaimers:

Okay, so that’s enough dilly-dallying. Let’s get to the meat (sorry) of the subject fast (sorry²):

1:20am: I learnt my lesson from last year and remembered to tapau food for Sahur. Yay me!

10:30am: Following some advice from last year about my breath concerns, I came to the office prepared – Not an advertiser (yet).

12:12pm: One of our freelancers, Hanna, drops by and joins in on the “Let’s kacau UiHua berpuasa” fun. Cis.

6:45pm: Leaving the office for my buka puasa appointment with Hana (not the Hanna mentioned earlier). Despite working on my article about Greece all day, I wrote like two sentences.

7:30pm: I arrive at KLPAC, where I crack open the bottle of water and roll myself a cigarette. Life is good.

Buka Puasa with Hana (not Hanna the CILISOS freelancer)

So Hana’s one of my cast members in Indicinelive!, an upcoming show at KLPAC (shameless plug). I figured it’d be interesting to see how someone with a non-traditional working schedule would buka puasa and because I’m also in the same situation. Also, Hana messaged me earlier today to tell me that she would not be fasting due to…. womanly issues, but she’ll still entertain my questions. I tapaued some food, water, and coffee and headed to KLPAC.

Hana tells me that when there are rehearsal times that don’t allow for a “proper” buka puasa meal, she’ll usually tapau food and eat in the car. Her meal of choice is usually KFC and water, just because. Hana’s sahur is just water (“I drink a lot of water. Hee hee”), which is a personal preference because she works in an air-conditioned environment so it gets pretty dry.

When I asked her how she feels about Ramadan, Hana says the first week is the “feel good week,” where there’s the initial excitement to turn over a new leaf, to instill good habits for the rest of the year, and to go for Terawih. But as life would have it, work and friends asking you to buka puasa with them come in and it might become “less Terawih, more friends,” she says with a smile that you can’t see cause she decided to cover her face in the picture collage above.

6:50am: Woke up with the alarm ringing since 6:00am. Didn’t feel like eating, so I just had water and went back to bed

11:44am: I don’t feel as fresh as I did yesterday. But it’s all a lie. The freshness is a lie. Brain still not functioning.

4:32pm: I have a feeling that every time I go for a walk, people wonder if I’m sneaking out for a cigarette. I’ll admit though, I did think “If I took a drink or a cigarette, no one would know.”

6:38pm: I realized something funny. The closer it comes to buka, the less the urges become. So weird.

6:43pm: Leaving the office a lot earlier than everyone else to buka. Nobody seems to ask why. It’s a nice feeling, like

7:20pm: I meet with Aiman at a mamak near KLPAC for buka puasa. I’m acting with Aiman in one of the four short plays featured in Sisa-Sisa, due to open at the end of this month *COUGH*. We didn’t have much time as our rehearsal was due to start at 8, so we literally had to do a dine-and-dash. Aiman’s way of buka puasa is a little more similar to mine, but for different reasons. He won’t take a heavy meal right away, instead starting with water, kurma, and kuih “just to taste the flavors”. His takes his full meal later between 10-midnight.

Aiman says this is because he doesn’t want to further stress his body out by taking huge meals right after a fast, adding that the highlight of fasting shouldn’t be the countdown to buka puasa:

“[Fasting] shouldn’t be evaluated in calculated hours. If you count the hours then it’s not meaningful… You’re fasting, but you’re ticking boxes. It means nothing”

He says that to him, Ramadan is a time for self-reflection – a time for self healing and to apply a bit of change within yourself and the world without imposing it on others. It’s a reminder of how a Muslim should be for the whole year… sorta like a reminder to keep them from going astray. “It’s a self challenge,” he says.

1:44am: I’m so out of it from the exhaustion of work, puasa, and rehearsals that I accidentally tossed my charger on my Magic Trackpad. It’s now a Magic Crackpad 😥 6:30am: After inadvertently following Hana’s water-only Sahur yesterday, I find it actually suits me better. In fact, not eating and smoking kinda eases the cravings… especially the smoking part.

11:00am: I’ve been working on this Greek article for three-and-a-half days. I think that compared to last year, I’m less physically affected but my clarity of focus has definitely taken a beating.

3:13pm: Lydia just got her McDonald’s. The first thing she says is “Mmm… UiHua so sedap”. I resist the temptation to say anything dirty. 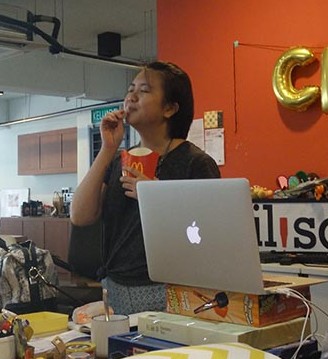 6:40pm: WTFLOLBBQADSL Traffic is so s**t! I really admire Muslims who can go through Ramadan traffic without batal puasa. I think I spat out more curses than all seven Harry Potter books combined. On the way in I bumped into Joe Hasham and Faridah Merican (theatre legends and founders of KLPAC) who were buka puasa-ing with some staff and actors. Omar got a little distracted (or maybe I did) and I ended up interviewing Faridah instead.

Faridah says that for Sahur, she’ll have a glass of warm or hot water at about 5am and fruit if she feels like eating.  She’ll almost always buka puasa with a glass of hot water and a kurma, followed by either a home-cooked or bought meal (They were having rojak when I joined them) or at one of the two restaurants at the KLPAC premises. She mentions that they’re usually light meals, but Joe would always make her a Nescafe kosong after.

At this point Joe interrupts us to ask Faridah if she wanted coffee. Faridah nods, looks back at me and says “See?”

When I asked her what she liked most about Ramadan, Faridah says she absolutely loves the month of Ramadan because of the “calming aura it gives”. While she contends that there might be negative aspects from certain quarters, it’s “very nice if you can pick on the beauty of it – especially if you hear the call to prayer at the mosque”.

“It’s especially nice once you get closer to Raya and hear the festive songs. Even if you’re a cynic, you can’t help but hear the songs and get nostalgic thinking about your mother, father, siblings… some of whom are not here any more.”

Thursday, July 9th: Traffic jams should be outlawed during Ramadan

6:45am: I now keep a bottle of water in my room so I can just wake up, drink some water, and go back to sleep. +1 Puasa Points.

9:50am: I overslept! Rushing to work makes you thirsty!

11:20am: Today’s a little easier cause I’ve finally finished the Greek article but I still need to figure out where to buka puasa tonight. I’m meeting Ridwan, a good samaritan who helped me out with a flat tyre a month back.

12:00pm: I’ve arranged to meet Ridwan near his workplace at The Mines.

1:24pm: Joined the CILISOS crew for lunch at IKEA. It’s extremely tempting since I haven’t eaten there for a while but today, I’m just chupping the table -_- Lydia comes with a tray of food and says “Eh, UiHua, order first la!” Twice. Grrr. But she did remember that I was fasting and apologized. Hahah. 1:28pm: To be honest, I find the smell of the food more tempting than the sight of it. Especially Hans‘ marinara sauce.

4:08pm: They’re making coffee… Taking.All.Willpower.To.Ignore. Then Letitia (one of our interns) asks if I wanted some.  (╯°□°）╯︵ ┻━┻

7:55pm: After being stuck in traffic for almost 2 hours to meet Ridwan, I’ve concluded that I will batal puasa every time I drive. So back in May, Hans and I were on the way back from Palace of the Golden Horses after attending the launch of Parti Ikatan Bangsa Malaysia when a piece of metal decided to get acquainted with my tyre. As we were stopped by the side of the road trying to fix it, Ridwan stops by and offers his help. We found the photo. Yay! 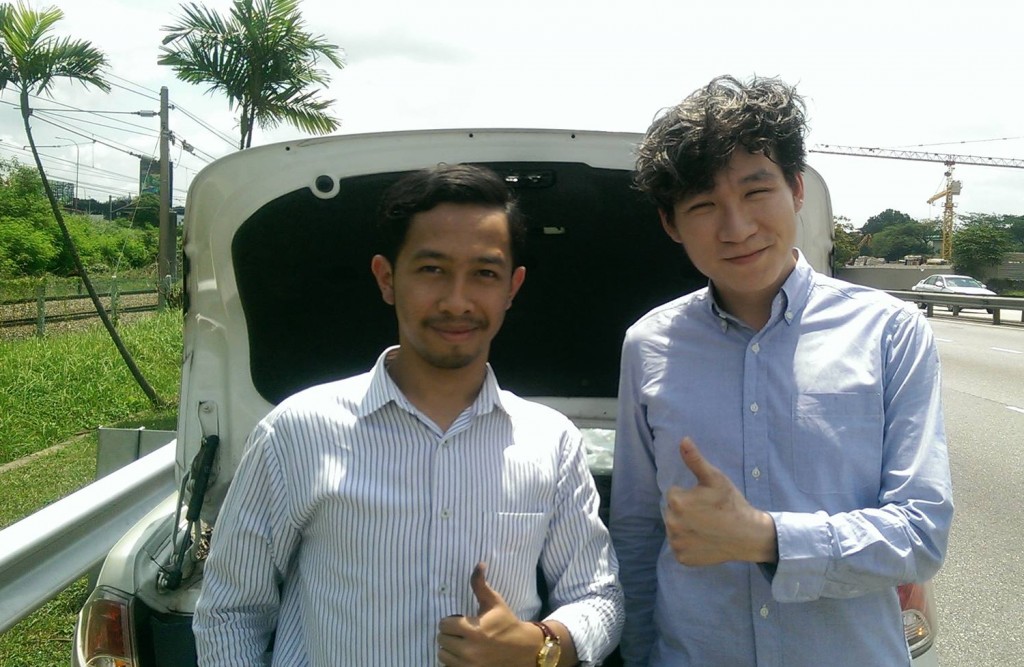 I meet Ridwan in Nando’s (Poor guy, he buka puasa with two bottles of water while waiting for me) where we order, then head out for a smoke. I find out that he’s originally from Negeri Sembilan and he’s only been here for about five months. Ridwan says that he would buka puasa with prayers, afterwhich he would (in order) take kurma or raisins, water, wait till after Terawih, and have rice. For Sahur, he takes rice or “anything heavy that’s filling”… but after the Azan, of course.

We spoke about other elements of puasa, such as strategies to pull you through a day of fasting (reading the Quran and praying), that one of the nights on the last 10 days of Ramadan is special (Lailatul Qadar), where “kebaikan satu malam lebih daripada seribu bulan,” and that you can do charity work in the name of a friend or family member who’s unable to puasa.

The one thing he mentioned though, is that many people wind up buying things which are unnecessary during this time – which equates to wastage. It’s especially observable in pasar ramadan, where many people are “hungry, see, buy”. Ridwan says that puasa is supposed to be a reminder of the less fortunate… those without food and water.

“The difference is that we get to buka puasa with good food and drinks. The poor don’t.”