So this article actually comes about from something that’s been going around Twitter. If you like being up to date on Malaysian politics (and why shouldn’t you be? It has more twists than the plot of Game of Thrones and the PJ roundabout combined) you would have heard that the National Security Council (NSC) bill was passed by parliament recently.

You may have also heard of how the NSC gives the our PM almost  genie-like powers on a whole lot of things. But if you don’t know what the NSC is, you can read about it in our previous article here (and also see the genie). The whole NSC thing has got a various people worried about the whole thing. So worried that certain groups and human rights activists have come together to launch a campaign called #taknakdiktator, a campaign that is meant to get support for the bill to be rejected by the Senate (after being passed by Parliament, a bill has to be passed by the Senate, something we talk about here).

But right after these initiatives were launched. Some very strange things started to happen.

After #taknakdiktator started to hit Twitter on Monday, we received screenshots of a tweet getting comments from a number of people saying the exact same thing at the exact same time and using a new hashtag #tweetberbayar. Initially we actually thought that these accounts were robots. Not this kind of robot but those fake accounts that are used for spam. But we blurred their faces because when we checked these profiles, we found that these were actually real people!

We really don’t want to reveal their identities but if you really want to know who they are, you find plenty using #tweetberbayar on Twitter.

That’s not all. After the news that the NSC bill had been passed, a user by the name of Rakyat Malaysia started a petition on change.org to urge people to reject the NSC bill (which was covered by news websites and even endorsed by Lawyers For Liberty). But just a day later, another petition appeared on change.org that looked almost identical to the first one except for a few differences.

Try to spot the difference.

And all this has got us thinking: Did the gomen just pay people to accuse the opposition of paying people to tweet?

This isn’t the first time that stuff like this has happened. It’s become such a common thing in the past few years that whenever weird stuff starts happening to things that seem to be anti-gomen, this would be the explanation: The cybertroopers have come for it.

First off, cybertroopers are NOT the soldiers in Star Wars

No, those are called Stormtroopers.

Of the two words that comprise it, ‘cyber‘ means something involving computers and networks, and ‘trooper‘ means low-ranking soldier or state police officer. As for the word ‘cybertrooper’ itself, we did find a couple of attempts to provide a definition for it. Yourdictionary.com defines cybertrooper very simply: an activist who uses cyberspace. However, an article by Malaysian Digest says this instead.

“What about cyber troopers? The word itself conjures up an army of Matrix-like digital identities that are elusive and anonymous warriors. In many ways, they are paid to generate word of mouth and shape people’s perception.” – Malaysian Digest.

This opinion piece on The Malaysian Insider even claims that there are 4 different types of cybertroopers.

But instead of just trying to define it, why not we look at examples of cybertrooping instead.

What are cybertroopers used for in Malaysia?

Cybertroopers have many duties, but we’ll try to list them all.

Aside from the comment spamming we demonstrated earlier, they also notify the police of seditious comments. In January this year, the Inspector-General of Police (IGP), Khalid Abu Bakar posted a tweet.

Basically he said that statements made by Kampar MP Dr. Ko Chung Sen and Eric Paulsen of Lawyers For Liberty would both be investigated under the sedition act. This led Eric Paulsen asking the IGP not to listen to cybertroopers while ignoring the death threats made towards him. Why did he say that the IGP was listening to cybertroopers? Well, because the pictures that the IGP posted looks like it came from someone else…

Aside from Twitter, they have a huge presence on Facebook as well. E.g. you may have heard of the page Friends of BN which has about 1.5 million page likes.

So we mentioned that the pictures involving the Kampar MP and Eric Paulsen weren’t from the IGP. But the picture actually already says where it’s from. 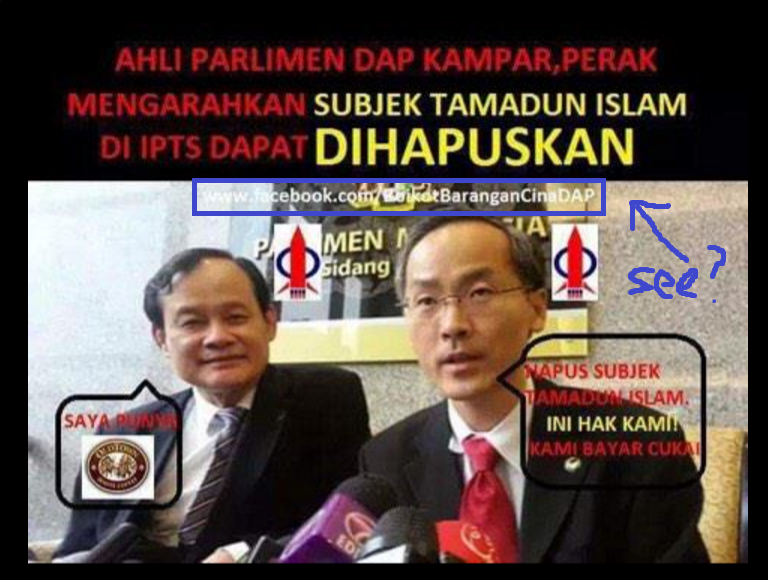 Picture posted by the IGP but containing the URL of a Facebook page.

In regards to the sedition case in point 1, a Google search showed us that Eric Paulsen actually got the shorter end of the stick. The photoshop work done on him is scaaaaary. (We’re not gonna put them here cos they look really ugly, but if you really wanna see, click this and this at your own risk.)

But they do use photoshop for a lot of things. E.g. this page on FB has tons of em’. 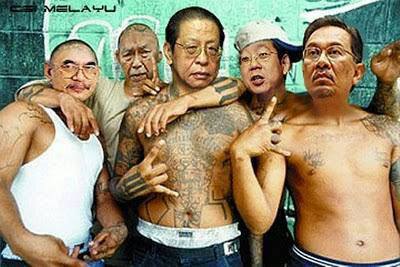 Not long after Dato’ Saifuddin Abdullah quit BN and joined PKR, there were rumours going around that PKR was ready to remove Azmin Ali as Menteri Besar of Selangor (the same way they removed Tan Sri Khalid Ibrahim). Mykmu.net, a gomen website, said that these rumours had been reported by a blog called babab.net. The article on babab.net itself is very critical of Pakatan. We’re not saying that PKR doesn’t have a lot to answer for what they did in Selangor though.

However, both Azmin Ali and Saifuddin Abdullah were quick to dismiss these as rumours, but Wanita PKR chief, Zuraida Kamaruddin was quick to mention the involvement of cybertroopers.

“We hope that UMNO cybertroopers will stop wasting people’s time on unfounded gossip and look into the country’s economic situation instead.” – Wanita PKR chief, Zuraida Kamaruddin, as quoted by The Star.

Aside from that, blogger Papagomo was also recently asked to pay RM800 thousand in damages to Anwar Ibrahim over blog posts linking him to a sex scandal back then.

4. Mess with polls and petitions

As for cybertroopers involvement in polls, IT blogger Keith Rozario discusses in his article how certain polls involving Anwar Ibrahim get very anti-Anwar like results because one user (or at least the user’s IP address) would be voting a few thousand times on the same answer. You can read about it more here.

So cybertrooping isn’t limited to any particular field of expertise. However, one could say that they are something like the Nazgûl in the Lord of The Rings maybe? Because just like how the Nazgûl would flock to anyone who wears the One Ring, cybertroopers seem to flock to anything that isn’t in line with their political affiliation.

So who’s paying these dingdongs?

There have been rumours la that BN pays these cybertroopers. This article from 2011 claims that the gomen was hiring cybertroopers back then. This Facebook post also supposedly lists down the cybertroopers under UMNO. Tis’ be Papagomo btw, in case you can’t remember. Image from keadilandaily.com.

But just how far they are actually being supported remains a mystery. Former Communication and Multimedia Minister, Datuk Seri Ahmad Shahbery Cheek has denied that the gomen had been funding cybertroopers. Pemuda UMNO member,Tun Faisal Ismail Aziz also said that they have no power over people like Papagomo (the guy who allegedly stoked the fires of the Low Yat brawl).

What we do know is they are viewed positively by the gomen. Recently there were reports that our PM said this.

“We need to create a new group of soldiers, which are the keyboard warriors.” – PM Najib Razak, as quoted by Astro Awani.

He says that this was needed to counter allegations and present the right picture to the people. Besides that, his wife too has called on more people to defend and protect her online.

Datuk Seri Ahmad Shabery Cheek even supported the formation of a group to monitor cyberspace. His sentiment has been echoed by BN Strategic and Communications Director, Rahman Dahlan, who said that what BN cybertroopers need are facts and speed.

Heck, prominent cybertroopers (like Papagomo and Ali Tinju) also actually got rub shoulders with politicians all. Picture compilation of Ali Tinju with politicians. Images from his Facebook page.

So while the gomen could actually be involved, we honestly don’t know to what extent. And quite frankly, friendship is hard to prove.

Guess which country comes up when you Google “Cybertrooper”? Top results all about Malaysia.

When we first started writing this story, we found that the first use of the word cybertrooper in Malaysia came about somewhere in 2007 on a few blogs, and even back then it was exclusively used to refer to the Malaysian cybertrooper.

But as we tried to find if the term cybertrooper was used overseas as well, all we could find was that it’s used in a Japanese video game series.

But this actually means that cybertrooper could actually be a Malaysian word!

Yeap, it could be. And it even may be here to stay, because an UMNO supreme council member recently said this.

“We need to have an awesome team in cyber war to counter and fight back our opponents through the same medium – the social media.

How to get a strong team? The way is for all the three million Umno members to be united under one leadership, be active in cyber space, and counter-attack to dominate perception on the social media.” – UMNO supreme council member Datuk Seri Mahdzir Khalid, as quoted by The Star.

With even Barack Obama using social media to win the elections in 2012, it would be no surprise if the coming elections is won by the party that first conquers cyberspace.

“Cyberspace can be brought to bear as an instrument of power to achieve objectives in other domains. It’s connected. It’s always been true about other domains, and it’s no less true for cyberspace.” – Chris Inglis, Professor in Cybersecurity Studies at the US Naval Academy, as quoted by atlanticcouncil.org