Over 5,000 years ago in ancient Egypt, beer was an important part of the diet for every layer of the community. From Pharaohs to poor people, to wealthy Egyptians and even children, everyone was drinking beer on a daily basis, even preferring beer over water because water then was often contaminated. “Cant wait to crack a cold one with the boys after my shift.”. Image from rosenlearningcenter.com

If you’re looking for the first beer ever made, people pretty much began making beer as soon as they found out they could plant stuff. Scholars believe it started some 10,000 years ago, roughly around the same time when humans first discovered agriculture in general.

Fast forward to present day, beer is a global industry that’s worth hundreds of billions of dollars. According to a WHO study in 2010, among all the varieties of alcoholic beverages in Malaysia, beer is the most consumed, comprising of 76% of total alcohol consumed, followed by 22% of spirits. (in LITERS OF PURE ALCOHOL). WHO estimates that 12% of Malaysians drink alcohol, and despite having the world’s 3rd highest excise tax for beer, these Malaysians still chug away. But with great industries, comes great environmental impacts. As far as beer brewing is concerned, the 3 main environmental issues it must address are water usage, electrical consumption, and waste water production. That’s why, Heineken Malaysia is rolling up its sleeves to make the its beer greener, and we mean environmentally friendly, not adding green dye or actually turning people green.

But first, we have to understand how beer is made

Before we can appreciate what Heineken Malaysia has done, we need a brief idea of how beer is made in the first place. The main thing to know before we go any further is that beer is made of barley.

As we walk in fields of gold. Image from precisionagricultu.re

Firstly, barley is made to soften and germinate by soaking in hot water for a couple of days to produce malted barley. Then, the malted barley is dried and grounded and mixed with LOTS and LOTS of water to produce a mixture called mash. The mash is then “cooked” with hot water to release the sugars within it, which will give the beer its sweet taste, and this is known as the wort.

The wort will then be cooked with at high temperature. Usually, this is where a herb/spice called hops is added. Hops is the thing that gives beer its bitter flavour, and it’s also to balance out the sweetness of the sugars and it also helps kill any bacteria in the wort. This is also where breweries can get really creative and add their own secret ingredients (like honey, pizza, and bull testicles), set their own duration or temperature of cooking and so on. Even the timing of adding the hops can affect the taste greatly. These are known as mash tuns, giant kettles where the wort brew. Image from folha.uol.com.br

Now we get to the actual alcohol part, but the wort will have to be filtered and cooled first. The alcohol production depends on a process called fermentation, which is where yeast is added into the wort to transform the sugars into alcohol. The process can take days to weeks depending on the temperature they are placed in, or in Heineken’s case, almost a whole month. Heineken even uses their own proprietary strain of yeast, which is the same yeast they have been using for over 100 years.

They look so innocent when they’re not in your genitals. Image from bbcgoodfood.com

Once that’s done, the now alcoholic beer is filtered and carbonated, which means carbon dioxide will be injected to give that fizziness. Finally, the beer (basically some kind of fizzy fermented barley herb soup) is bottled, pasteurised, packaged and shipped to where it needs to be. You can read more about it here, or watch the rough process here.

NAH, BACA:
There will be free breakfasts for all students in Malaysia... but it comes with a twist

Until now, it’s not very clear which part of the beer industry most affects the environment Sorry guys, contest is over. Image from conversationprints.com

As you can imagine, all the boiling, cooling, cooking, filtering and transferring liquid around has to be done on a large scale, with fancy machines running on electricity and fuel like natural gas. Not to mention plenty of safe drinking water used to cook and clean. But because breweries have different practices, their consumption of resources can vary greatly too. For instance, water consumption can be somewhere between 4 – 10 hectoliters per hectoliter of beer (1 hectoliter [hL] = 100 liters) for modern breweries.

Because of this, the results of impact studies vary greatly too. While some studies found that the agriculture of barley affect the environment most, others say it’s the manufacture of bottles, and another said it was the manufacture of packaging and transport. But as far as breweries goes, its impact isn’t usually considered a main concern, contributing between 5% to 20% of beer production’s overall environmental impact.

And reducing that impact is exactly what Heineken’s “Brewing a Better World” strategy aims to achieve. In a nutshell, their goal is to continue growing their business, but with a focus on sustainability, which means looking for ways to reduce environmental and social risks in the entire value chain, and they have been pretty successful with it so far. The 6 areas of Brewing a Better World. Click to know more. Screenshot from heinekenmalaysia.com

Heineken Malaysia estimates that they used about 4.32 hl of water to produce one hl of beer in 2014. In their 2016 annual report, they’ve managed to cut that water usage down by 15% to only 3.65hl. A large part of it is achieved by tweaking their bottle washing nozzle system. The company reduced the nozzle size by 0.05mm, optimised the pressure of the rinsers, and fixed leakages throughout the entire system. As a result, the bottle washer water usage was halved from 9.0m3/hour to 4.5m3/hour. 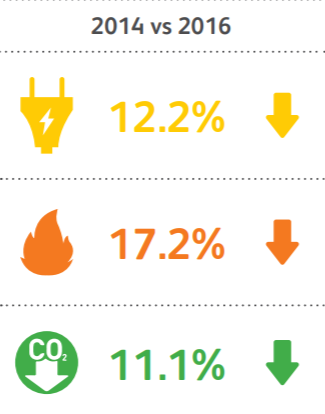 On the front of energy usage, Heineken Malaysia did a similar maintenance for a variety of machines, which includes things like the boilers, air compressors, cooling towers, and so on. They have even purchased 140 “non-ozone depleting” refrigerators. As a result, they’ve managed to reduce energy consumption overall, and even cut down on carbon emissions. Sorry guys, contest is over. Image from cuteoverload.com.

It wasn’t that long ago when U.S president Donald Trump visited the Pope in Vatican City, Pope Francis presented him with a signed copy of “Laudato Si”, a 192-page “letter” written by Pope Francis himself, calling for science and religion to cooperate against climate change. It was a clear message to the president that once claimed that climate change is a conspiracy made up by China.

Then, the president announced that the United States will not be part of the Paris climate agreement, although 151 out of 197 countries pledged to the agreement. Despite that, big companies and even states in the U.S. refused to follow their president’s footsteps, and are seeking to join the agreement themselves to reduce their carbon footsteps.

Climate change is already wrecking havoc to the natural balance people are used to, and affecting people’s livelihoods across the globe. It’s relieving when big industries pledge to do their part and educate others to do so as well. Hopefully, more companies in Malaysia will recognise and contribute to the cause, much like our gomen has.