If y’alls grew up during the 80s, 90s or 2000s, chances are, you’ll remember going to school with horsing around your friends on the bas sekolah or maybe even getting in trouble for sneakily eating food in class. While it’s safe to say that school was a fun time for most of us, we can all agree – with our rose tinted glasses stowed away – that heavy schoolbags were the bane of our young, collective existences. What about kids nowadays, though? Are heavy schoolbags still a thing? 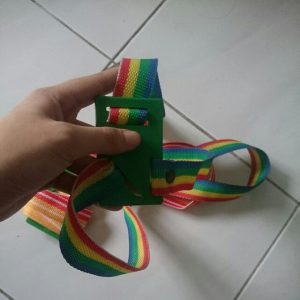 90s kids will remember swinging around a book strap full of buku latihans like a more eco-friendly morning star.

Turns out, after having a chat with a number of parents and their kids, heavy schoolbags are absolutely still a thing, but it’s hard to visualize the weight just by seeing the numbers… so we thought that the best way to do that was to put the bags side by side with groceries of similar weight. You know how parents are usually reluctant to let their children, especially young ones, carry heavy groceries whenever they come home from a supermarket? Ironically, here’s how much some of these kids are carrying, on average, to school every day. Fatihah, one of the parents we interviewed, have two kids who are 10 & 8 years old respectively. The 10-year old carries three bags to school, and in terms of groceries, that’s: Meanwhile, her 8-year old’s bags translate to about: Two of our colleague’s neighbors weighed in with their own children’s bags – one of them, a 9-year old carries to school the equivalent of: Another 8-year old, whose school recently reduced the number of subjects taught in a day from 8 to 5, carries about this much:

Ayriss, Mona’s eldest daughter, is pretty strong for a 13-year old, but it’s hard not to feel secondhand fatigue just looking at this: Even though we didn’t get to chat with students from all the different types of schools in Malaysia, the results are still jarring; schoolbags weighing 1/5 of a child seems to be a running trend and as it happens, there’s research to back up our findings – a local study done in 2018 by researchers at Universiti Kebangsaan Malaysia reported that the average schoolbag weighs almost 17% of an average 11-year old. They also found that…

NAH, BACA:
How can Msians be 'certified GILA' to avoid being sent to jail?

These berat giler bags are causing stress, back pains and other problems Wow, whaaaat a surprise. Who knew carrying backpacks that are almost 1/5 of your weight every day would mess your back up, eh? But hey, don’t just take it from the science people, let’s hear it straight from one of our interviewees:

‘Every time I go up the stairs (to get to her classroom), I run out of breath and my back really hurts,’ – Ayriss, a Form 1 student in an interview with CILISOS

Y’all know that feeling when you’re coming home with super heavy groceries and your apartment’s lift is out of service? That’s probably how Ayriss feels every time she goes to school and sees the six flights of stairs going up to her classroom. On top of that, tripping and falling because of the weight of her backpack isn’t an uncommon occurrence. Fatihah’s children, too, have complained to her of sore backs, but that’s not the only thing they’re worried about; there’s the stress from having to remember to bring three (sometimes four) bags home once classes are done.

When you forget to bring your tupperware home and you kena rotan:

Then there’s the victim that no one expected in this whole heavy schoolbag saga: books. According to Amy, whose children go to an integrated Islamic school in Seremban, many of her friends whose kids are attending Sekolah Kebangsaan have to cram so many books in their bags that they (the books, not the kids) end up like rojak six months into the school year. If the books were borrowed, kena saman for the damage pulak. Heavy schoolbags are a long standing issue; it’s been that way since our editor’s schooling days, but as we’re going to see below, there are ways to lighten the kids’ loads. Schools and parents have tried these solutions out, among others, to varying degrees of success:

…But as enticing as they sound, all the solutions above do come with their own kinks, be it money, time or effort. Take Ayriss’ SJKC, for example –  it took extensive discussions between the school and parents to put a block scheduling system (essentially reducing the number of subjects taught in a day) that played a part in reducing the weight of their students’ schoolbags.

At the end of the day, students nowadays already have enough on their plates, what with the increase in the number of subjects being taught in school and having to excel in co-curricular activities as well and it’s up to the Ministry of Education, schools and parents to band together to do their part so that students will no longer have their backs broken by what amounts to massive bags of rice.