If you’re a business owner, you definitely know that it’s not an easy gig. Yeah, 2020 sure threw us a curveball with the whole pandemic thing, but even without it, there are plenty of other non-business related risks business owners need to look out for. I.e.: Screenshots from Malay Mail and The Star.

Being an SME ourselves, we wanted to find out the things business owners need to keep in mind in case they face these kinds of misfortunes, and how to bounce back afterwards. So, together with our friends from Allianz, we talked to three business owners who have faced various tragedies:

Here are some of the most interesting things we learned from them:

1. Ashraf learned that you’ll need to pay RM100 for the Bomba report

Back in September 2020, Ashraf Mohd Harun, the co-founder of Wok It, received an Instagram message informing him that his restaurant outlet in Bangsar has caught fire.

“We got a message from an unknown person on IG saying that there was smoke coming out from our shop early in the morning. We straight away got the closest team members to head to the shop to check it out.” – Ashraf to CILISOS.

But before his team even get to call the Fire and Rescue Department (Bomba), the whole place was already covered in soot by the time of their arrival. Ashraf and his team were met with this. Images courtesy from Ashraf

Regardless, Ashraf still contacted the Bomba to have them assess the situation. At the same time, he also called Tenaga Nasional Berhad (TNB) to cut off the power supply. Little did he know, the process wasn’t so straightforward.

As it turns out, you’ll need to lodge a report to the police first before reporting to the Bomba. After you’re done making these two reports, only then can you can call other authorities like TNB.

“So, we gave TNB a call concurrently. However, they couldn’t come without Bomba coming to assess the situation first. TNB’s role also is to only cut off the electrical supply, and have no jurisdiction for anything inside the shop.” – Ashraf.

Thankfully though, the authorities were really helpful and got the report done super fast. Ashraf shared that it would normally take up to 14 days to get the Bomba report, but he received it within a day, and paid RM100 for the copy.

Waitamin, do you really gotta pay for the Bomba report?

Ashraf shared that Wok It suffered a loss of up to half of what they normally earn (RM30,000-RM40,000) but they managed to bounce back by appealing to their loyal customers. This writer gets the promo email sent by Wok It.

“All we did was to offer a special 20% off to our email list (our most pampered customers) when we re-opened.” – Ashraf.

And it seems like business is back as usual in their Bangsar outlet after it was closed for a week for restoration purposes. But spoiler: Allianz has a way to help with this, though we’ll save it for the end of the article.

2. Fikri learned that the authorities might not be able to do much if your shop gets robbed

While the authorities seemed helpful in the previous story, the owner of Fast Phone Fix, Muhammad Fikri had a slightly different experience.

Back in 2018, Fikri’s shop, which was formerly known as FPFmobileXpertz, in Batu Caves was broken into.

“I believe the robbery happened at dawn when it was raining heavily. The robbers used wrecking bars to break the locks and pry the doors open to enter my shop.” – Fikri to CILISOS. Translated from BM. A picture of Fikri‘s shop from a year ago. Img from @fendymojoo Twitter

See, on top of selling various types of phones, Fikri also fixes them. And the robber pretty much songlap EVERYTHING in his shop… including the phones he was fixing.

Upon learning that his shop kena rompak, Fikri lodged a police report in hopes that the authorities would catch the bad guys. Instead, he was interrogated… but for investigation purposes, of course.

“The police then interrogated me and took pictures of the damages at my shop.” – Fikri.

You’d think that the police would go all CSI, find eyewitness testimonies, and dust the crime scene for fingerprints like this… But Fikri told us that the police had only taken pictures, looked at his shop, asked how much was lost, and that was literally the end of it.

He then took matters into his own hands by closing his shop for two weeks to carry out repair works. His business suffered a total loss of RM23,000 – an amount exceeding his already uncertain income – in equipment damages like the showcase glass and laptops (spoiler: Allianz has something for this too). This amount of loss also includes the combined worth of the phones that were stolen.

“On top of that, some customers rushed me to compensate them. I was in a sad and helpless situation at that time and had to borrow some money to do so.” – Fikri.

Fortunately for Fikri, he had business partners that he could borrow from. Fast forward to today, his business is operating under a new name, new face and is now equipped with CCTVs for security purposes, and hopefully to aid investigations if his shop gets robbed again (choi, choi). And it seems like his services are really in demand right now.

3. Zaidatul learned that even if you can open your shop after a flood, you might have nothing to sell

Everytime the monsoon season swings by, many places in Malaysia will be hit with floods. A recent flood happened in Hulu Langat in November 2020 and it affected a lot of businesses like Satu Keluarga Trading owned by Zaidatul Rizwani’s father.

“It was raining heavily at Hulu Langat from 11pm (4th November 2020). I woke up the next morning to study but when I was about to pray, I saw that the water levels were rising rapidly. My father went to the store to discover that the store was already flooded.” – Zaidatul to us. Translated from BM. Her father’s shop was closed for two days, but even with the shop being reopened, the business couldn’t operate as it used to. One reason for this was because they didn’t have much stock left as most of it was damaged in the flood. 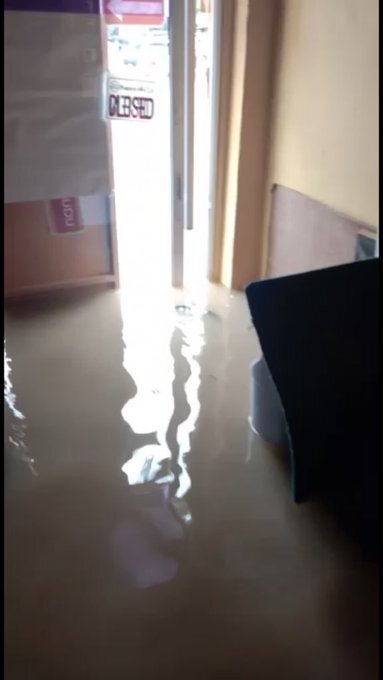 The shop during the flood. Img from Zaidatul

Besides that, several other items and equipment like a counter table, freezer and packaging items were damaged in the flood as well. Zaidatul mentioned that since they owned those items, they had to fork out their own money to get new ones.

It’s also noteworthy that some business owners are provided certain equipment by their suppliers, like freezers and display units. In cases like this, it’s possible that those suppliers would bear the loss, but this really depends on the arrangement between the business owner and the supplier.

But if these expensive machineries belong to you, it’s definitely a good idea to get them insured. By now, you could probably tell that we’re gonna say…

Spoiler: whether it’s fire, water or robbery, Allianz has you covered

Since this article is talking about calamities business owners faced, Cilisos and Allianz didn’t wanna bombard you with subliminal messages on how Allianz will be your knight in shining armour. Instead, we wanted to shed light on the real struggles Malaysian business owners had to overcome to survive.

But if you’re a business owner that’s looking to get yourself covered, we’re not kidding when we say that Allianz has a super comprehensive plan called the Allianz Smart Retail Shield. In all of the situations above, Allianz has solutions for them. Click on image from Allianz Smart Retail Shield to find out more.

In case of a fire, Allianz will cover for your building, stock and any equipment that was ravaged by the flames. And if your area is susceptible to floods, you can also go for the optional flood coverage.

There’s also an additional Inconvenience Relief Benefit that you can opt for, which comes in super handy if the flood or fire causes you to close shop for more than 72 hours. In this case, Allianz will provide you with a daily income of up to 180 days while your busy with your repair work, as well as cover your building loses if the damage is more than 15% of the Building Sum Insured. This also applies for fires and floods. Screenshot from Allianz Inconvenience Relief Benefit

Aside from that, you can also insure your assets against burglary, breakdowns or fraud via a selection of optional coverage. In Fikri’s case that we talked about earlier, here are some ways the optional benefits could apply:

But what we’re saying here doesn’t even cover half of what Allianz has to offer. From your data, to your employees, to public liability claims; Allianz has something for you. And the best part is, the plan is fully customisable, so you can pick and choose the protection that your business actually needs.