Ever since the 9/11 tragedy, flying has never been the same. You cannot say “bomb” or “terrorist” in the airport now and security officers glare suspiciously at people like everyone’s carrying C4s or something. Airports in Malaysia are no different, such is life.

Starting 2018, Malaysia plans to implement a new ‘anti-terror’ fee for flying… and they’re making us pay for it! Under the new border management programme, Advanced Passenger Screening System (APSS), a passenger might be charged RM35 for flying out of the country, though there was no mention if domestic flights would be subjected to the same.

Aiyo, more charges to the air fare? Potong stim. But here’s what you need to know about the system.

Work on implementing APSS had started in 2015, when our country began studying the UK security model. That year, Deputy Prime Minister Ahmad Zahid Hamidi and his team toured the UK’s National Border Tracking Centre (NBTC), which monitors and screens passengers on all international routes. He said their system was more efficient and saved time because no physical inspections were required for passengers.

“The APSS will connect data to the Department of Civil Aviation and airline companies, and the system will be implemented soon after Malaysia signs the Preventing and Combating Serious Crime (PCSC) Agreement with the US in Kuala Lumpur.” – Zahid Hamidi told reporters

APSS is also a condition for our country to join the US’s Visa Waiver Programme, which will enable Malaysians to travel to the US without a visa.

A source told The Sun Daily that APSS is an expensive programme and the Government may have to fork out close to RM8 billion over a period of 15 years to an outsourced private company involved in setting up the system. The name of this company is not revealed.

“The plan is to have the company develop the hardware and software for the APSS and that passengers bear the cost.” – said the source

That’s where your RM35 comes in. The source said it’s important that the company employed be well-versed in the job and have related experience. This better be some world class Ultron shizz for the money! Image from mole.my and sideshowtoy.com

So, how does APSS work? It allows the Immigration Department to identify risks posed by passengers flying into the country as passenger information will be provided by the airlines. For example, when a flight leaves Tokyo, the authorities here will have about 7 hours to check the background of the passengers on the flight.

“They will be able to check whether a passenger is on the international terror watch-list, and deny entry to such individuals.” – the source told The Sun Daily

Hey wait a minute, doesn’t the airport already have security? Those of you who fly frequently would know that airport security is a time-consuming slog – first, gotta show the surly the Immigration officer your passport, as he/she tries to decide if you grew a beard or you’re someone else entirely… scan thumbprint…take your photo with the pokeball camera… put your bag through the scanner… walk through metal detectors (if you beep, gotta hold up the line some more, while they pat you down).

Speaking of pat downs, Kinabatangan MP Bung Moktar claims he was felt up during a security check and said the groping should stop.

“How can you raba-raba passengers? Please stop groping. Buy a scanning machine instead. Get scanners that can detect guns or drugs but not one where the alarm goes off so easily whenever passengers pass through it.” – Bung Moktar said in Parliament

But what’s all that for, you know? The pat downs, Immigration officers, security officers, x-ray bag scanners? Aren’t all these steps for security? Are they in a way implying that we have not had adequate security before, that we have to pay for it now, coz it sorta feels like it. What do you guys think?  😐

On top of that, passengers are already charged for security, very little, but it’s there. The Passenger Security Service Charge (PSSC) was introduced on 15 January 2007 at all airports operated by Malaysia Airports Holdings Berhad (MAHB). It’s only RM3 for domestic and RM6 for international. The charge is included in the Passenger Service Charge (PSC): 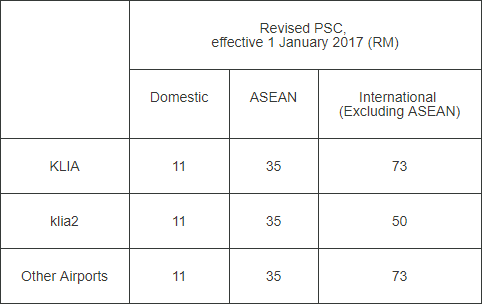 The security charge is included in the Passenger Service Charge. Chart from klia.com.my

So is it unfair for passengers to bear the cost? According to the International Air Transport Association (IATA), many governments expect aviation to pay for its own security, while they subsidise security for other modes of transport and public areas (e.g. train stations, stadiums, public buildings).

As per the International Civil Aviation Organization’s (ICAO) policies, passengers can only be charged for the following: screening passengers and baggage, cargo, airport and airline personnel security control, monitoring restricted areas and training. So, they shouldn’t be including, say, the auxiliary police standing guard outside the airport in the charges, for instance. Click here if you want to read more on their best practices.

What to charge and what not to charge – a very rough interpretation on IATA’s security charge guide. Imgs from Malay Mail and Astro Awani

We might lose RM1.5 billion annually on our gross domestic product though As for whether we can scrap APSS entirely, no. Under a new ICAO Standard, programmes such as APSS or similar will become mandatory in 2018. Currently, some 65 countries worldwide have already introduced similar programmes.

However, when IATA and the Association of Asia Pacific Airlines (AAPA) heard that the Malaysian Government was considering charging the passengers, they raised concerns.

“A large majority of the States with API programs in place do not levy such charges and instead, have agreed to fund this through the general national budget.” – both aviation bodies said, The Edge Markets

Basically, they are saying that the Government should bear the cost because it is a matter of border security and intelligence collection. ICAO Document 9082 expressly states that the cost should not be recovered through a charge. Besides, airlines already contribute to passenger info by collecting, formatting and sending data to the authorities.

Still, the fact that we’d pay RM8 bil over 15 years is whack la because there are available systems that are already being used by other countries to check the passengers’ status. Like the one Australia uses which cost A$80 mil (RM250 mil). Then, we found that the UK government spent £830 mil (RM4.5 bil) on their system, called e-Borders, though it is estimated to hit by £1.1 bil (RM6 bil) by 2019. Meanwhile, the US’s system CAPPS II cost $45 mil in 2004, and $380 mil by 2008. And these countries have so many more international airports compared to us! Malaysia only has 6 international airports.

Just imagine, in August alone, MAHB recorded 5.5 million international flight passengers x RM35, they would have collected a total of RM192.5 mil. Over the course of a year, that would RM2.31 bil a year. The question also is, where is the money going to go?

The aviation bodies added that the charge would have an negative effect on Malaysia’s tourism competitiveness and aviation sector. It could potentially decrease international passenger traffic of around 2.8% annually, reducing the industry’s contribution to Malaysia’s gross domestic product (GDP) by US$362 mil (RM1.5 bil).

So the next time you fly, guys, whatever cheap deal you got, don’t forget to add RM35 to your budget T_T