If you were to be seditious in Malaysia today, what do you think will happen?

Well, you’ll probably be hauled off to the nearest police station and get questioned very thoroughly. If found guilty, you’ll probably either get fined up to RM5,000, get jailed for up to three years, or both. Considering anything can be seditious, this may seem a bit harsh… unless you look back in history.

Back in the day, offending people in higher places can get you seriously executed, and it didn’t take much to set off the people in power: wearing yellow was seen as treason towards the Sultan, and a Bendahara in Johor actually executed a husband and wife because he kept dreaming of them. The wife was drowned by a stone tied around her neck, and her husband received a fancy execution method known as the salang.

A keris is used to stab the heart… through the shoulder Sometimes with a spear, as seen in this execution in Keddah. Img from People Post Insider.

As you’ve probably gathered by now, a keris is involved, although alternatives can be used like in the picture above. A special kind of keris is used for this purpose, and although many blogs called it the Keris Penyalang or Keris Alang, most Western sources refer to this keris as simply Keris Panjang (long keris). Unlike the usual wavy keris, this keris is straighter and longer, enough to reach the heart from the shoulders, and are often worn or carried by aristocracy or bridegrooms.

As for how the deed is done, the essence seems to be directly stabbing the heart from an opening above the collarbone, leading to a small puncture wound and minimal bleeding.

“The victim was made to squat and the executioner drove the k. panjang from a certain spot (tempat penggalan) inside his collar bone down into his heart. This execution was carried out quickly or slowly according to the sentence. The keris was driven through cotton wool so that the blood was soaked up, since only the ruler could cause blood to be shed.” – Excerpt from “Keris and Other Malay Weapons“, G.B. Gardner, 1936.

Several blogs touted this as a more civilized and humane form of execution, as opposed to the gorier alternatives – pancung (beheading) and sula (impaling through the anus). 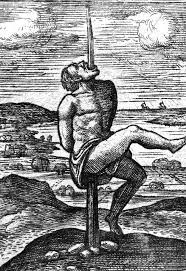 Sula is kinda liddis, although some texts say the stake didn’t go that far up. Img from Wikipedia.

However, if an anecdote is to be believed, it’s no less horrifying. According to Abdul Kadir Harun, village head of Kampung Salang on Pulau Tioman, the village got its name from the execution method, where executed people were tied to an X-shaped wooden beam and pierced through the collarbone with a keris. The screams of the dying could supposedly be heard throughout the island.

“It was a slow, painful and public death… It may sound cruel to others but it made the village a safer place.” – Abdul Kadir Harun, in an interview with NST.

Uhhh… right. Well, we dunno which is it, since we’ve never seen salang first-hand, but apparently…

The salang punishment was pretty popular back then

Some of the documents that mention salang also implied that it was a common method of executing people. We didn’t find much records of salang in Western documents though, but that may be because the punishment was known by another name. One of the most famous references of the salang execution in pop culture was in the movie Tun Fatimah (1962), where Bendahara Seri Maharaja Tun Mutahir and his family were sentenced to death by Sultan Mahmud Shah in the 16th century.

NAH, BACA:
How did your mummy and daddy get together? Tell us & win an angpow for them :)

Some Western documents refer to what happened to Tun Mutahir as being ‘creesed’, and that’s a new term for us: ‘creese’ was an old spelling of ‘keris’, and being creesed most probably refers to receiving the salang. One of the earliest records of creesing was done by a famous figure in Malayan history. In his book ‘Commentaries’, Alfonso the Albuquerqe mentioned a creesing by Parameswara (referred to as Parimicura).

After fleeing East Java to Singapore, Parimicura creesed his host – a chief named Tamagi – within a week of being in Singapore usurped the throne, where he later ruled for five years. However, we’re unsure whether Parimicura stabbed Tamagi’s heart through his shoulder, or merely drove his keris into Tamagi.

Regardless of that, creesing accounts weren’t limited to just Malacca. An account by H. Wilfrid Walker at the turn of the 18th century revealed that creesing was also done outside the Peninsular, in Sarawak as well. While living with some head-hunting Dayaks, he saw a Salang execution, and it was implied that this wasn’t the first time he’d seen it:

“The method of execution here is the same as in other Malay countries, the criminal being taken down to the banks of the river, where a long “kris” is thrust down through the shoulder into the heart, and is then twisted about till the man is dead.” – excerpt from ‘Wanderings Among South Sea Savages and in Borneo and the Philippines‘, H.W. Walker, 1909. An example of Keris Alang. Not sure if it reached Sarawak back then though. Img from Tinta Pak Su.

In ye olde Pahang, those who have committed a huge crime will receive either the sula or the salang. The latter was described as such:

“Salang is when the accused have their limbs tied, sat down at the stern of a boat, and taken to a small river, where the pertanda (executioner) who bears a keris from the Bendahara will stab the person until death at the salang place. The pertanda will then go to Kampung Cina, asking for one tampang (money) from each house in expenses for burying the one killed by salang.” – translated excerpt from ‘Sejarah Pahang‘, Haji Buyong bin Adil, 1984.

Sometimes though, a huge crime wasn’t necessary to get yourself creesed. Remember the executed husband and wife we mentioned at the start of the article? In the 1700s, a shipwrecked sailor named Vaughn was held captive in Johor, where he saw a Malay man creesed and his wife drowned with a stone tied to her neck. Their crime was regularly trying to strangle the Bendahara in his dreams.

Still, while the method was popular…

Salang wasn’t the answer to everything

Despite its prevalence, not every seditious crime like piracy and talking smack to the king will get you salang-ed, or pancung-ed or sula-ed. We recommend reading this 1945 article by R.O. Winstedt to find out more on old Malay punishments, but they got quite creative. Besides the usual creesing, a journal kept by Malacca’s Dutch Governor in the 1670s mentioned that the Sultan of Johore, then in Pahang, once had the hands and feet of a Jambi pirate cut off, his back-bone split open, and salt and pepper rubbed onto his wounds. Another account told of a youth involved in a trivial issue in the Sultan’s court: his scalp was cut open and pulled down over his eyes. He was then tied to a stake in the Pahang estuary so that he would eventually drown when the tide comes in. We dunno what other weird ways old timey criminals got executed with, but suddenly getting stabbed with a keris doesn’t sound too bad.