Recently the gomen has announced a moratorium on the death penalty and are currently looking at removing it altogether:

(What ‘moratorium’ here basically means is that while the death penalty still remains in the law, they’ve put a hold on ALL executions until a decision can be made. Think of it as hitting the pause button on your PS4 until your mum decides whether or not you get to keep it.) “No, Sally! No! That’s what got us here in the first place!”

However, with the recent baby rape case that has tugged on the heartstrings of a nation, they seem to be making a U-turn on this decision, saying that it should be kept for exceptional cases such as this. If you didn’t hear about the case, well… an 11-month-old baby was reportedly raped by her caretaker’s husband in Bangi. After spending two days in the hospital, the baby eventually died.

With such a grim event, it’s not hard to understand why some Malaysians are calling for the death penalty to stay.

So what would be the right move for Malaysia? How much do death penalty cases actually cost the country? And what kind of crimes warrant the death sentence, if it is kept? To help us answer this question, we decided to look at the policies of other countries, both with and without the death penalty, to get a better idea about the current global situation and whether or not Malaysia should follow suit.

Aaaaand, here are some things we learned…

1. Russia have halted all executions too, for a long time now

While Malaysia is late to the abolitionist-in-practice party, Russia has actually not had a state-sanctioned execution in years, despite it still being a part of their laws; they announced their moratorium in 1996.

That’s right, the country with one of the most authoritarian regimes in the world actually doesn’t officially kill its criminals. Nothing to see here! *nervous laugh* Image from: imgur

And, much like us, they stopped doing executions because of a rethinking of the concept of human rights, and their people seem to be fine with it not being around. To give you a comparison, only 44% of Russians are for execution, while in Malaysia, a high majority of the public are actually in favour of the death penalty!

Ironic, right? You’d usually think of Russia as being the violent ones, given their bloody history and the Hollywood stereotypes. Spoiler Alert: The guy with the moustache wins. Image from: FB page SocialistDreamsAnimuMemes

Actually, Russia and Malaysia make for interesting examples as they show the difference between the contrasting perceptions of the death penalty in Europe and Asia. While capital punishment has mostly gone the way of the dinosaurs in Europe (more on this later), Asia actually has the HIGHEST number of executions of any continent in the world! In fact, the top 5 countries with the most executions in 2017 are ALL from Asia. 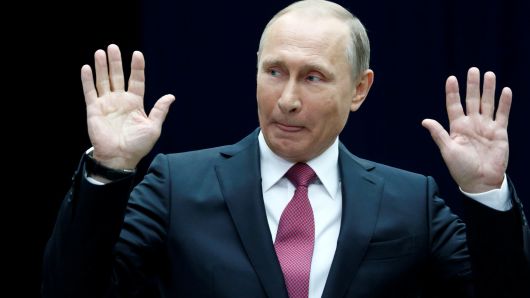 “And you call ME the violent one.” Image from: CNBC

Which leads into our next finding, and this actually surprised us…

2. Two countries you wouldn’t expect to still have the death penalty are… Japan and South Korea?!

You’d think that the two most ultra-progressive nations in the world would be ultra-chill when it comes to dealing with their criminals, but as it turns out, both still have the death penalty in their laws. 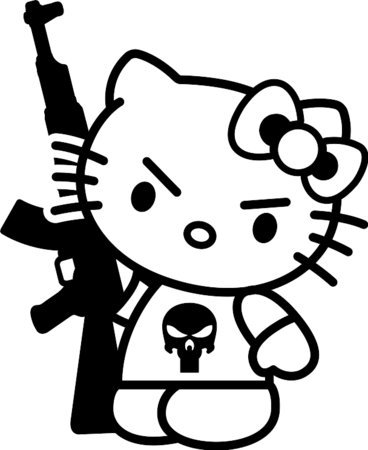 Don’t mess up in Japan. Image from: Amazon

But don’t think of them as ultra-violent WWII-era kamikaze killers thirsty for impure blood, because they’re actually not. In Japan, the death penalty is only reserved for the most serious of crimes (such as mass murder, or murder of a minor), while South Korea actually has an unofficial moratorium in place, and haven’t executed anyone since 1997.

Oh, and btw, both countries hang their criminals, so no crazy samurai stuff there. “We don’t do that here (anymore)…” Image from: Rebloggy

South Korea especially is interesting to look at as well because it shows just how complex the issue of the death penalty is when it comes to public and gomen opinion. For instance, while their people are split on total abolishment, their highest court actually voted to keep it in their laws because according to them, it is completely constitutional.

While Japan on the other hand had their last execution in July of this year, and those were members of a Japanese death cult who carried out a massive gas attack on the Tokyo subway back in 1999.

Aaaand while they’ve got the highest number of executions per year of any country in the world (based on Amnesty estimates), no one really knows much about China’s executions, because they don’t publish their death penalty statistics. (But in all seriousness though, look at how Asia dominates this list. Even we made it to the list at no. 15!)

So, remember earlier about how we spoke about Europe and how differently from us they feel about the death penalty? Well, as it turns out…

3. A European country can’t join the EU if it practices the death penalty

One of the perks Russia gained by having a moratorium was being able to join the European Council (not the same as the EU, but they’re the ones who outline EU policies). In fact, Russia actually joined the very same year they announced their moratorium.

Because, in contrast to us Asians, Europeans seem to have a very dim view of the death penalty. The EU states that they:

“… hold a strong and principled position against the death penalty in all circumstances and for all cases.” – European Union “Kill them with love, not violence!” Image from: CBS News

And in case ugaiz are wondering, yes, this goes for baby killers as well. As mentioned earlier, the death penalty is virtually non-existent nowadays in Europe; only Belarus still does it, and their last execution took place last year, by firing squad. See that little ‘2017’ in the center-right of the map? That’s Belarus. Image from: Jakub Marian’s Language Learning, Science, & Art

As ugaiz will know if ugaiz studied world history, Europe has an especially dark history when it comes to executions; there was the French Revolution in the late 18th century, where tens of thousands of people were beheaded by guillotine. Then there was Vlad the Impaler, the inspiration behind Bram Stoker’s Dracula who impaled his enemies as a form of psychological warfare. And let’s not forget perhaps the most famous mass executions of all time: the Holocaust, where 6 million Jews died by Hitler’s fascist war machine. Yeahhhh maybe it might not be such a bad thing that they all insaf already.

NAH, BACA:
Samurai bonds: Why Malaysia is raising money in Japan instead of China and why the name so cute

But wait! How is it that Europe is ranked as one of the safest places in the world despite the fact that they have no capital punishment? Well, let’s hop across the Atlantic (or Pacific, depending on where in Europe you are), and take a look at the US of A for the answer, because as it turns out…

4. US states without the death penalty consistently have LOWER crime rates

Surprised? We were too. Recently, R.AGE made a video about the death penalty in Malaysia and cited this study that showed that this was the case:

Of course, since everyone likes a good chart with colourful bars and numbers, here’s one that shows the homicide rates in the US from 1990-2016:

As ugaiz can see, starting from 1990, the states with the death penalty ALWAYS tapau the ones without it in terms of higher homicide rates. Now, at this point ugaiz might be asking “wahhh, soooo gantung people oni for decoration issit?”

Well, as mentioned in the video, the issue isn’t as simple as it seems: There actually isn’t enough evidence to suggest that the death penalty is an effective or ineffective deterrent. Full Fact, an independent fact-checking charity in the UK, analysed the following UN study on the correlation between the death penalty and homicide rates in the top 10 homicide countries in the world: 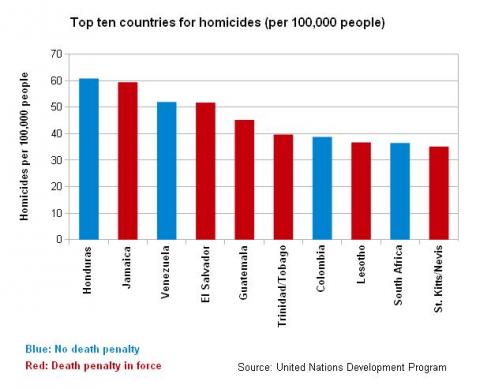 Which is even more worrying when you consider the following…

5. More people have been wrongfully convicted of death penalty offences than you think

Here’s something interesting we found in the same survey we cited earlier which showed that a majority of Malaysians are in support of the death penalty: when given ‘scenario’ mandatory death penalty cases and asked to pass judgment, only 8% chose to give the death penalty for murder, while only 29% favoured it for drug trafficking.

Because when you really sit back and think about it, it’s not a small thing to sentence someone to death with the knowledge that you could be wrong. And many times, it has gone wrong. A study published by Proceedings of the National Academy of Sciences puts the wrongful death penalty conviction rate in the US at 4.1%, which is worrying because even ONE wrongful execution doesn’t look good for the gomen. And that’s not all: as of this year, 163 people have been exonerated from death row since 1973 in the US alone.

And in case you’re wondering, yes, this does happen in Malaysia too. “Oops, salah gantung di. Sorry about that!” Image from: Merriam-Webster

But… wouldn’t it be cheaper to execute people than to imprison them for life?

Guess what, and this will surprise you: the answer is actually no. The California Commission on the Fair Administration of Justice estimates that executions cost at least 12 times as much as keeping someone in prison on a life sentence! And that’s just in California: as it turns out, executions cost wayyy more than life sentences ALL over the US (at state AND federal levels). Also, as ugaiz can see in the chart below, it’s MUCH costlier for the defence (i.e. lawyers’ fees) as well: 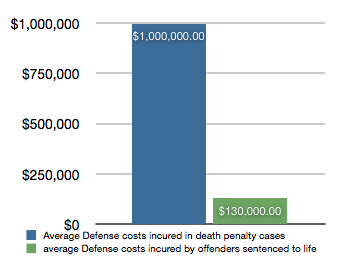 Stats from the state of Kansas. Image from: Kansas Coalition Against The Death Penalty

And how much does it cost to execute someone in Malaysia? Well, to be honest, no one knows. Not even our Prison Department. But even they admit that execution costs more than a life sentence. But, fiscal costs aside, how do the people who work in the legal business actually feel on the matter? Well, while Gelugor MP Ramkarpal Singh is for the death penalty in exceptional cases (such as the recent rape and murder of a baby), a growing number of his colleagues seem to have the opposite opinion:

“Viewed coolly, opinions whether they be for or against capital punishment are emotional, and not rational.” – Dato’ Mah Weng Kwai, ex-Judge, High Court of Malaya

“There is nothing to be gained by killing another person even though he or she may have committed a heinous crime. All it shows is that we are a society that is bent on retribution and punishment instead of reform and mercy.” – Eric Paulsen, Lawyers For Liberty Executive Director Don’t forget that the end of the day, death row inmates are people with families too, and the mental cost can be extremely heavy for everyone involved, as can be heard from various testimonies. Long story short, no matter how heinous the crime, the death penalty hurts the family of the convicted the same way it hurts the family of the victim, so we have to ask ourselves if that’s really what we want. It’s also painfully slow; as admitted by the Prison Department themselves, it can take literally YEARS for the entire process to run its course.

So those are the facts. In due time, we’ll have to decide if we really want to carry on with this system, but until then, ALL executions for ALL cases in Malaysia have been stopped.