In May of this year, Sabahans celebrated Tadau Kaamatan (Harvest Festival) in their usual uniquely Sabahan way: the Unduk Ngadau, a traditional state-level beauty pageant. Since the first-ever Unduk Ngadau event in Penampang, Sabah in 1960, the competition is held annually among ethnic Kadazandusun women, who vie for the title of ‘Unduk Ngadau’ (derived from the Dusun ‘runduk tadau’ which means ‘the woman crowned by sunlight’).

Naturally, we Peninsular Malaysians don’t often hear much about Kaamatan besides our Sabahan friends posting ‘Kotobian Tadau Tagazo Do Kamaatan’ on their Insta pages alongside pictures of them wearing their traditional black outfits. Btw, it’s black because it’s believed the color wards off spirits, and is suited to their environment and lifestyle. Image from: Bernama/The Vibes

But before diving into how the Unduk Ngadau is selected,  let’s first look at why this whole selection process is held in the first place. And for this, we have to take a jump back to the beginning of time, in the Land Below The Wind…

Interestingly, the origin story of Momolianism, the belief system of the Kadazandusun, bears a striking resemblance to that of the Abrahamic religions. There are actually two slightly differing versions of this story that we found, but we’ll go with the version on the official Kadazandusun Cultural Association (KDCA) website:

The story goes that in the beginning, there was Kinoingan, his wife Sumundu, and nothing else. Then, the two deities created the universe and everything it it, including the heavens, earth, and people. Things were pretty peaceful in Libabou (Heaven) for a while, until Ponumpulan, Kinoingan’s son, rebelled against his father in jealousy of his power, and started to design an ‘evil kingdom’ of the underworld called Kolungkud, from which he spread misery and death among humankind. In Momolianism, it is believed that Mount Kinabalu was created by Sumundu to be the centre of the world. Image from: Amazing Borneo

Angered by his son’s betrayal, Kinoingan banished Ponumpulan from the Heavens, forever cursing him with the name Rogon Gayo (chief of all evil). However, the damage was done, and humankind strayed further and further away from Kinoingan. To remind them who was in charge, Kinoingan rained down Seven Scourges on humankind, the last of which was a drought and famine that threatened to end life on earth.

Once the people realized their mistake, they repented and asked forgiveness from Kinoingan. However, it would come at a price: Kinoingan would sacrifice his only daughter Ponompuan in the greatest possible demonstration of love, and her body would be planted as seeds which would later become the food sources of the world. Ponompuan agreed to it, saying:

“My body will give rise to all sorts of edible plants to feed the people. My flesh will give rise to rice, my head—the coconut, my bones—tapioca, my toes—ginger, my teeth—maize and my knees—yams. Our people will never go hungry again.” – Ponompuan/Huminodun, ‘The Legend of Huminodun’ as told in the annual magazine HUMINODUN 2002 Huminodun/Ponompuan, as portrayed by Alexandra Alexander in the 2017 local film ‘Huminodun’. Image from: Borneo Today

And so, recognizing Ponompuan’s sacrifice, the people dubbed her ‘Huminodun’ (The Transformed Sacrifice), believing that her spirit continues to reside in crops in the form of Bambaazon, the Spirit of the Paddy.

Every year, the Kadazandusun people hold the Pesta Kaamatan to remember Huminodun’s sacrifice, and the Unduk Ngadau to remember the epitome of her total perfection in beauty, mind and soul. While most of Sabah has embraced either Christianity or Islam, these events remain the biggest yearly celebrations in the state.

Similar to modern beauty pageants, a woman does not win the Unduk Ngadau (or Miss Kadazan/Miss Harvest, as the role was previously called) based on looks alone. Perhaps the best description of the ‘ideal’ Sabahan woman exists in the song ‘Sumandak Sabah’, the theme song for the 2018 edition of the Unduk Ngadau. Here’s a part of it:

(Sabahan women, where can you find them?)

(They’re all pretty, they can all cook rice)

(Smarter than the men)

And the rewards for fulfilling those criteria are no joke either: this year’s winner, UMS student Maya Hejnowska won RM25,000 in cash, a RM35,000 scholarship from the North Borneo University College, among others.On top of all that, the winner of Unduk Ngadau is expected to represent the state as a tourism ambassador and take part in various cultural and community projects.

So as you can see, the Unduk Ngadau is a pretty big deal in Sabah, and the the competition is fierce; the winners must not only be physically beautiful, but must also possess compassion, fortitude, a sharp mind, and selflessness matching that of Huminodun’s. There’s even a game show testing the intelligence and general knowledge of the contestants:

Oh btw, you don’t even have to be fully Kadazan to take part. Now, we couldn’t find the exact competition entry T&Cs, but based on what we’ve read, as long as you are a non-Muslim female, under the age of 27, have some Kadazan blood and speak the Dusun language, you could stand a chance of becoming the next Unduk Ngadau; just ask this year’s winner, Maya Hejnowska, who is of mixed Kadazan-Polish heritage:

“Culture is about how we live our day-to-day lives while incorporating traditions – be it the language we speak, the food we eat or anything related, it is not just about blood and ethnicity.” – Maya Hejnowska, 2021 Unduk Ngadau

In fact, you don’t even have to be a resident of Sabah. While the official Unduk Ngadau began in 1960 as a competition between Kadazan women within Sabah, it has been been opened to Kadazan women residing in Peninsular Malaysia since 1995. As a result, contestants from as far as the Klang Valley, Johor and Penang have taken part and even won. Daphne Iking is one such example, representing the Klang Valley district during her win in the 2003 edition of the competition. But above the prizes, fame and glory, these women come together from all over the nation mainly to showcase their heritage; a major part of which, of course, is their signature sleek black sinuangga dress with an elaborate coin belt as a centerpiece.

NAH, BACA:
Meet the 24 y/old who made drinking poop water a reality for Msians 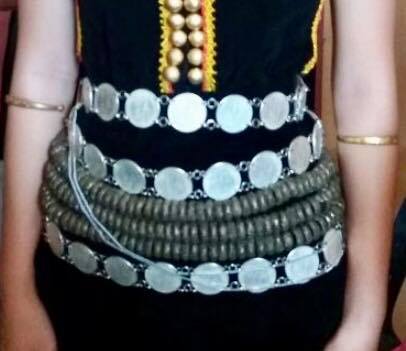 Those of you with keen eyes may have noticed that a key fixture of the Kaamatan/Unguk Ngadau is the himpogot, (the traditional silver coin belt worn by Kadazan women. Each tribe has different names for these belts, and the reason for wearing one isn’t too far from what you’d expect: in the olden days, these were worn as a show of wealth. And wealthy indeed is the woman who wears one; a complete set of three tangkong (brass belts) and 3 himpogot each comprising about 18 or more silver coins can go for more than RM15,000.

The reason these belts are so valuable is that they use actual antique silver currency from bygone eras, most notably those made out of British silver dollars in use during colonial times. But its value extends beyond just monetary; ‘original’ himpogots are considered extremely rare, and are passed down through the generations from mother to daughter. An ‘original’ himpogot set with British coins dating from 1897-1911. Image from: MySabah.com

And while it wouldn’t seem like crime is really a thing during these events, naturally, given the high profile of these precious items and the contestants who wear them, it’s only fitting that the contestants are given adequate protection from harm. In fact…

With the recent sexual harassment allegations involving a politician brought forward in this year’s edition of Unduk Ngadau, it’s natural that concerns are raised over the safety of the contestants. However, some can take comfort in the fact that there is a whole list of regulations written into Kadazan customary law (Adat) to safeguard the safety and modesty of the contestants, as well as the Kaamatan Festival as a whole. Some of the offenses in the list include:

There are even specific prohibitions on holding drinking competitions, getting drunk and losing control of your senses, and forcing others to drink or eat what they dislike or are not used to during Kaamatan. Which is basically their way of saying ‘contest first, aramaiti later’.

And what happens if you break any of these rules? Well, you get tried in Native Court and are subject to the laws and penalties of the Adat (because the Native Court is constitutionally recognized as legit). For instance, last year, the Native Court fined a Pakistani businessman with a sogit (native customary fine) of eight buffaloes and eight gongs for racial slurs targeted at Sabahans. 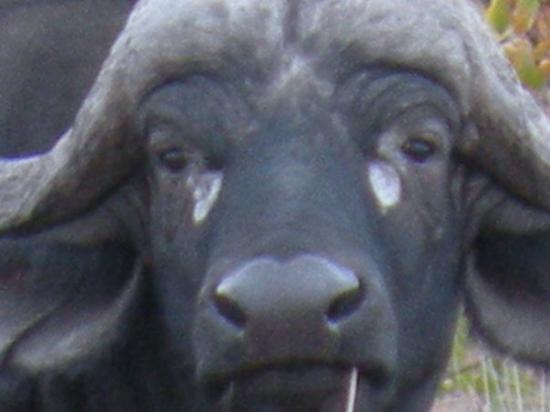 Tfw you realize you’re about to become currency. Image from: Tripadvisor

Incidentally, the lawyer defending the earlier-mentioned politician also drew the wrath of Sabahan village elders when he allegedly referred to the Unduk Ngadau as an ‘exotic cattle show’. Understandably, the elders were royally cheesed off, and, despite his apology, still want to take him to Native Court:

“No one should insult the culture and adat of any community. Let this happening be a lesson to anybody, so in the future, this won’t happen again. That’s why we are taking this action.” – Tan Sri Joseph Pairin Kitingan, President of Kadazandusun Cultural Association (KDCA)

On a side note, it’s pretty ironic that the lawyer made a reference to cattle, since that’s probably what he’ll be fined with if he’s found guilty.

The Unduk Ngadau continues to survive, but other parts of Kadazandusun culture might not be so lucky

Currently, Kadazandusun people only make up about 31% of Sabah’s total demographic, at around 1 million people. That might not sound too bad (for comparison, Australia’s Aboriginal peoples number between 713,300 and 721,100), but it becomes more of a problem when you realize that out of these 1 million people, it’s getting harder and harder to find youth who actually speak the Dusun language and practice the culture, especially since Dusun has been rated one of the fastest dying languages in the world:

“Kadazan parents no longer speak to their children in their native language – they converse in Bahasa Malayu, English or Chinese… To the parents, there is no expectation for Kadazan – they do not see their children gaining economically from it.” – the late Tan Sri Herman Luping, former Sabah Attorney-General Fortunately, there are those who are fighting hard to keep the Kadazandusun language and culture alive, such as the aforementioned non-governmental organization Kadazandusun Cultural Association (KDCA). And yes, this is the same group which is trying to take that lawyer to court.

It also helps that Kadazandusun culture is increasingly being featured in today’s media; check out this banger by Sabahan outfit K-Clique, which features the traditional Sumazau dance at the beginning.

No matter which part of Malaysia you come from, the Kadazandusun culture is an important part of our collective Malaysian melting pot; one piece in the colorful tapestry that makes our country beautiful. But whether or not it survives to see the next generation is up to us.