Let’s talk about Malaysian place names today. Some of them are pretty basic: Kuala Lumpur is literally ‘mud estuary’, and the town started out as one. Some are a bit more tricky or require a bit of uncommon knowledge: Sepang and Ipoh are among the many places named after trees, and Karambunai in Sabah was said to be named due to the locals celebrating the sinking of a Bruneian noble’s ship (karam Brunei).

Yet some others are so bizarre that you probably would have a hard time guessing it on your own. One such case is the township of Bota, in Perak. A few steps left out of the map is Pulau Pangkor. Img from Google Maps.

Divided (very unevenly) by the Perak River into Bota Kanan and Bota Kiri, the township used to be called Berahman Indera in the 1700s, until a giant showed up and terrorized the villagers. And that’s not even the worst part…

We’re not here to kinkshame. Original img from CNet.

Much of what we know about the Bota giant comes from several interviews with the villagers scattered on the net. According to Alias Karim, a fifth-generation villager, the original settlement in Bota was established some 200 years ago, and his ancestors arrived there about a century later. But even then, they’ve heard of the Bota. Described as a ‘muddy-gray’ creature that looked like Bigfoot, the Bota roamed the jungles some distance away from human settlement.

It’s been said to live underground or in a cave (or in an underground cave). It usually eats fish, specifically swamp fish like ikan puyu, ikan tilan, climbing perch, or even swamp eels, and it will leave its home during the dusk to hunt for these. However, the Bota had also been known to hunt animals and humans when it’s desperate. So strong was the believe in the Bota that whenever people disappeared, the giant will be suspected.

A strange detail that popped up in almost all the anecdotes about the Bota is it’s strange preference: the giant seems to like little children running around at dusk without their pants on.

“The large bodied Bota giant hides underground, and it is said that he likes children who did not wear pants. Local disappearances are often linked to the creature,” –  Mohamad Nor Abdullah, local man, translated from Sinar Harian.

“…but what made the giant so feared by the villagers was its strange interest in children who did not wear pants or shorts,” – Alias Karim, local man, from a news report on Kheru2006.

Apart from its… strange habits and its size, we also know that the Bota probably have a tail as well, as evidenced by a myth surrounding three villages. According to a legend, the Bota once kidnapped a rich widow, and a gallant young man fought the Bota to rescue her. To defeat the giant, the hero sliced it into three pieces: the left side of the carcass lay on what became Kampung Bota Kiri, the right side on Kampung Bota Kanan, and the tail on Kampung Ekor Bota. 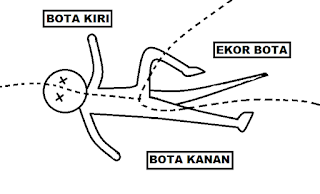 As a side note, it is also said that the place where the rich widow lived was later called Kampung Seri Kaya. Anyways, with such detailed stories, one may be compelled to wonder…

Waitamin… Was there really a Bota?

To be honest, we don’t know. Some of the locals had mentioned that it’s possible that the Bota was cooked up to scare little children into keeping their pants on and coming home early, but that’s just one aspect of the giant. Maybe a villager did saw a muddy giant in a forest a long time ago, and each generation they kept adding new details to the story. Maybe the mythical part of the Bota sprung up from some real historical event. Who knows? Old-timey people say the darndest things. A beast that turns elephants into stone… pfft! Img from OrangPerak.

The existence of both the Bota may be up for debate, but it’s interesting how the people’s belief in this shadowy figure and its actions were real enough that we have places in modern Malaysia named after it. So if you want to see whether or not the Bota exists, we guess you can always walk around without pants near some forests there at twilight. Even if you don’t meet the Bota, you’ll at least meet… a guard’s cota.