This article was first published Oct 2018, and has been updated to reflect recent developments.

Ohhhhhh boy. It was early on Friday when we all got the news: ex-Deputy Prime Minister and current UMNO president Datuk Seri Dr Zahid Hamidi has been charged in court with eight charges of receiving gratification, 10 charges of criminal breach trust and a whopping 27 charges of money laundering, making it a total of 45 CHARGES!

[UPDATE 14/12/18]: So it’s gotten from bad to worse for Zahid Hamidi and his Yayasan Akal Budi. He’s been hit with an additional charge of criminal breach of trust of up to RM10 million, which means it’s now a total of 46 CHARGES against him. This time, he’s been accused of loaning RM10 million to Armada Holdings from Yayasan Akal Budi.

[UPDATE 26/6/19]: So it’s gotten from worse to… worser for Zahid Hamidi? According to several reports, he’s set to be charged even more, this time in relation to allegedly taking bribes over a visa system the former govt was mulling. This new round of charges adds ANOTHER 40 CHARGES against Zahid, on top of the previous 46.

[UPDATE 18/11/19]: So it’s gotten from worser to… you get the point. Today marks the start of the criminal trial against Zahid Hamidi, and in the opening statement of the prosecutor was a damning verdict on Zahid’s foundation:

“The flow of cash will be laid in court to reveal that not a single sen from the RM31m was used for the benefit of poor people. On the contrary, it would show that a large amount was used to, among others, settle personal credit card bills, purchase of vehicle insurance policies and pay road tax for personal vehicles,” – DPP Raja Rozela Raja Toran, as quoted by Malaysiakini

Ok back to the original article below for more on Zahid’s Yayasan Akalbudi. Hands up if you’re not guilty. Image from Twitter user abe__ame

Now it seems as tho a lot of the charges have to do with a certain fund called Yayasan Akal Budi, of which Zahid Hamidi is a director. It’s alleged that he misused RM800,000 from Yayasan Akal Budi to pay some credit card bills. Zahid however claims it’s not money laundering, it’s just that his employees *cough* accidentally used the wrong account to pay off the debt.

Regardless, this article isn’t about Zahid’s charges. Instead, we at Cilisos, as the Pulitzer award-winning journalists (in our dreams that is), decided to look up some info about Yayasan Akal Budi itself, and managed to buy info and data about it from the Companies Commission of Malaysia (SSM). Once we got our hands on the data tho, you won’t believe the weird things we found about the fund.

Alright, so we admit, this technically isn’t from the SSM report, but we thought it’s worth a mention anyway #ihatecilisos.

After the first round of interrogation by the MACC, Zahid attempted to set the record straight and told the press that Yayasan Akal Budi is a charity fund that he and his family had set up. According to Zahid, the charity fund is means to help eradicate poverty and provide Islamic education thru the building of mosques, suraus and tahfiz schools. Wait so if one receives a lot of donations, and the other donates a lot….. Image from Utusan

One such example of Yayasan Akal Budi’s charity work is allegedly the funding of the school Sekolah Menengah Imtiaz Ulul Albab in Malacca. It’s also alleged that it was thanks to the fund’s donations that hundreds of SPM leavers got the money they needed to further their education in Egypt.

So how long has the Yayasan Akal Budi been helping the poor out? Quite some time it seems, as….

So here’s the first thing we found from the SSM report that we got: Yayasan Akal Budi has been around since 1997. That means that it’s old enough to be an annoying avocado-eating millennial. The fund is old enough to drive, graduate and vote.

For context’s sake, Zahid first became an MP in 1995 when he won the Bagan Dato seat. That means that in just two years, he had amassed enough to start up his own charity fund. It’s perhaps also worth mentioning that in order to start a yayasan, you’re going to need an initial fund of RM1 million, meaning that even in 1997, Zahid’s bank account was probably pretty stacked. 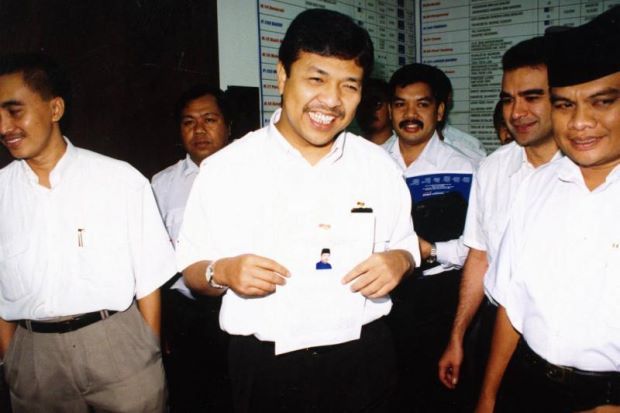 A young Zahid Hamidi back in 1996. We wonder if he himself was once an avocado-loving millennial. Image from MH Online

It is however pretty ironic that Zahid would later go on to criticise the then-PM Mahathir about corruption and cronyism in his govt. He was even briefly an Anwar ally during the infamous Reformasi movement, and was jailed under the Internal Security Act too. Zahid would however later go on to rejoin UMNO and claim that Anwar abused his position as Financial Minister to offer Zahid some pretty good business deals.

But enough about Zahid’s past. What about Yayasan’s past activities in the last two decades?

3. We couldn’t find much else about Yayasan Akal Budi from before the recent arrest

Other than the SSM report and a 2015 news article that briefly mentions it’s donations, we couldn’t find any other stuff about the fund that didn’t pop up due to Zahid’s recent MACC scandal. No website, details or even record of it in a govt ‘yayasan search engine’. No seriously, there is a govt search engine specifically for looking up yayasans. Um, is this where my taxpayer money is going to? Screenshot of BHEUU

That’s preeeeetty weird by itself. But then we did find out that it might be cos it’s not registered as a yayasan per se, but rather as a Limited Company by Guarantee under the SSM (that’s why we got the report from SSM). It’s however still not that easy to form a yayasan under the SSM, as you also need to get approval from the Ministry of Domestic Trade and Consumer Affairs.

We kid you not, when we fired up Google Maps to look up the address listed in the SSM report, this is apparently where Yayasan Akal Budi is located:

Maybe that’s why all the money gone, flags not cheap okay.

Well unless Zahid’s charity fund runs from under some tents in an open lot to save money… that might not be it. Tweaking around with the address from the report did give us other more plausible office buildings, but the actual address itself gave us this result when searched verbatim.

Maybe it’s an error in the report, maybe it’s Google messing up, maybe it’s Maybeline. And speaking of possible errors in the SSM report…

5. There seems to be absolutely no financial data about Yayasan Akal Budi at all

Okay so probably the weirdest thing about Zahid Hamidi’s Yayasan Akal Budi is that despite being registered with the SSM… the SSM doesn’t have any records regarding the fund’s finances. The N/A means ‘not available’, and doesn’t mean ‘nice butt’.

Now here’s the thing tho. As a fund registered with the SSM, they are apparently required to do the following each year:

If the company doesn’t carry out these things every year, there is the possibility of a fine against the company. Now, the SSM report lists the financial data as ‘not available’ which is strange, as according to a corporate lawyer we spoke to it’s apparently pretty strict on keeping their stuff up to date. Perhaps there’s just no money left to even have a financial report in the first place?

Well… it’s unlikely (but not impossible!), seeing as, like we mentioned earlier, you need a minimum of RM1 million to form a yayasan. Yayasan Akal Budi’s been around since 1997, and there’s somehow no data about their financial records since then. Add to that the fact that apparently Yayasan Akal Budi got a 40 hectre land grant from Sime Darby in 2017, which shows they were active up till last year even if their financial accounts are apparently unavailable.

Actual images of the Cilisos office trying to figure out what’s happening.

Of course, correlation doesn’t mean causation. Yayasan Akal Budi being accused as Zahid Hamidi’s slush fund does not necessarily mean that the missing financial data is the smoking gun proving that Zahid’s guilty. Clerical errors are a definite possibility, like we’ve seen Lim Guan Eng mistakenly place a decimal in the wrong place before what. Nevertheless, it’s still a very odd thing that there’s a blackhole of info regarding Yayasan Akal Budi’s financial data.

For now tho, Zahid still remains a free man – albeit thanks to a RM2 million bail as well as surrender of his passport. Okay so maybe not totally free but you get the point. As with any court case, it’s vital for us to remember that until he’s proven guilty in the court of law, he’s innocent, so all we can do is wait and see what happens in the trial. Bye have a great time! Image from Malaysiakini

Share this article:
NAH, BACA:
Wong Fu in Malaysia again! Why do we love them so much??