So you might have heard of some horror stories that are happening in our public universities lately.

No, we don’t mean the penunggu waiting in the girl’s dorm toilets, but about the girl who starved herself until her intestines koyak.

According to Harian Metro, a Psychology student from Sabah was only left with RM150 to survive for an entire semester, after a bulk of her PTPTN loan was used to pay for tuition fees and clear some debts to get into university. The poor girl had to rely on spiritual food by reading the al-Quran to feed her hunger, but her condition worsen until the doctors told her that she is in risk of developing intestinal cancer.

While that case may sound a little extreme, this other story about someone who broke into the donation box of a mosque that went viral ended with a very sad note… 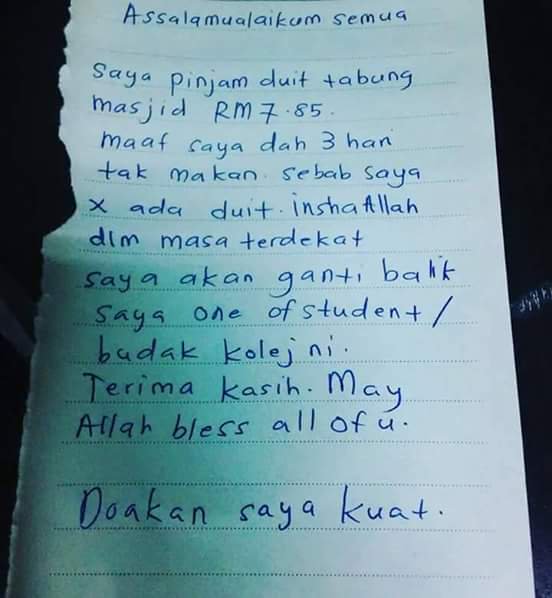 Why are students in our public universities so poor that they end up starving?

Well, these stories started surfacing when news of a report by an NGO came out with some stomach-turning results. According to the news, 3 out of 4 students in public universities were starving because they were too pokai to buy proper food, based on the results of a survey conducted by the Muslim Volunteer Malaysia (MVM).

There were some pretty cold-hearted reactions…

Since the news broke, the issue of poor and starving students soon bloated into a big huu-hah. The first reactions came from the universities who at first denied that there were hungry students in their midst. Then later, the Student Affairs and Alumni (HEPA) deputy vice-chancellors of 20 public universities, questioned the methods and findings of the survey. They even went as far as claiming that the survey had a ‘hidden agenda’.

Then came Minister of Higher Education, Datuk Seri Idris Jusoh, who made it a ‘personal commitment‘ to make sure no student goes hungry and ordered the universities to take action. Politicians came into the picture with Minister of Youth and Sports Khairy Jamaludin saying that the whole issue had been blown out of proportion, which didn’t go so well with some (but at least it got full sappot from Perkasa’s Ibrahim Ali). Then, last but not least, the bapak, mak, abang, kakak, adik, anak and anyone who has been through the uni life, shared their thoughts with #mahasiswalapar.

These are what some of them had to say:

… and there were some who helped…

Luckily there are were people who didn’t just bash these poor students for being malas, manja, or boros, but went out there and did something about it.

Like in Universiti Islam Antarabangsa, coupons were sold through the suspended meal concept that were used for feeding the homeless, where customers could pay for meals and a coupon is pasted on a board, so that students who needed the food can claim them with the already paid-for coupons. Meanwhile, Universiti Tun Hussein Onn Malaysia not only gave food to students throughout their course duration, but even RM300 to RM400 a month for eligible students who came from difficult backgrounds. And in Universiti Sains Malaysia, its student council started a food programme which was funded by private and university sponsors. NAH, BACA:
Wait. Do you need permission from FINAS to publish a video on Facebook?

… but there’s a larger problem that nobody is addressing

After news of their report and the feeding frenzy that ensued, MVM came out to say on record that their survey was NOT intended to highlight the problem of starving students, and it was the media who framed it that way without verifying with them the purpose of the survey.

“The issue is about how students manage their finances, like how they manage the PTPTN money they receive.” – Muhammad Jantan, as quoted in The Malaysian Insider He further explained that the students who responded to their survey were not going hungry for an extended period or throughout the semester, but had spread their finances too thinly after making poor financial decisions.

If you look at the actual report, there is an even larger issue at play. See if you can spot it: The MVM Report. Image via facebook.com/MuslimVolunteerMalaysia.

Did you see it? Yeah, it’s the 96% of them who said they felt burdened by the economic situation.

Huh?! So are they poor or is the economy bad? (Yes there’s a diff)

The answer is both, but hopefully you realise the difference here. While there may actually be real poor students who fully rely on their loans or scholarships to pay for their tuition fees and living expenses (and some even send money to support their families!), but the larger problem is that even the better-off students are finding it tough to survive in this current economy. An estimation of an undergraduates’ expenditure in UM. Image via Twitter.com

While students have been ‘encouraged’ to find a part-time job to cover for any additional expenses, there are probably other factors beyond these students’ control that play into this issue as well. The most obvious would be the rising cost of living since the implementation of GST. Not only does it have an impact on food prices, it has also resulted in increased prices on other basic expenses such as public transport.

Then there is the reduction in PTPTN loans, which makes it insufficient for students who sustain on them after the compulsory deductions. Then there is also the tuition fees. While there hasn’t been any reported significant increase to it, the loan reduction only means that it has become a bigger burden.

This problem needs multiple approaches and parties to be involved, rather than just telling university students to figure it out and throwing more food (or money) at it. Talking about potential solutions is way beyond the scope (and wordcount) to fit in this article, but if we really had to boil it down, we think that the real solution is financial education.

If anything, this larger issue probably illustrates the bigger importance of financial education, and how beneficial it should be implemented in our education system. It won’t just stop students from going hungry again, it could potentially have positive spill-over effect of stopping disturbing trends such as unpaid student debts or the lowering age of bankruptcies among Malaysians.

Plus, don’t forget there’s THIS to pay off… Unedited image from Continental Hair

As the saying goes, “Give a man a fish, and you feed him for a day. Teach a man to fish, and you feed him for a lifetime”, and we think this strongly applies here. Teaching students that they are the masters of their own fate and finances is probably a more important lesson that they will learn than their paper degrees. After all, it’s a lifeskill.