Not yet… but Smirnoff Ice has some AWESOME plans for Christmas and they wanna hear your suggestions! Tell us the Things that would make Christmas super-difficult for Santa in Malaysia, and you could WIN A Carton of Smirnoff Ice!

According to the boys’n’girls at Smirnoff ICE, it’s actually the #1 ready-to-drink alcoholic beverage in the world. So what does it taste like? Well the marketing guys describe it as a “Deliciously crisp with refreshing lemon taste“, and thankfully, Smirnoff Ice were also kind enough to sponsor us a crate for our recent Writer’s Meet, so here’s some feedback from CILISOS freelance writers (who in case you didn’t know, rarely use the word “deliciously”).

“Hey… this is actually quite pleasant!” 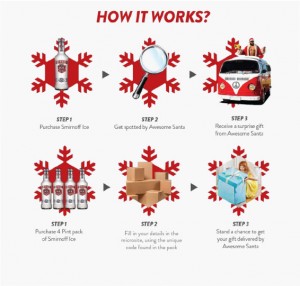 That last guy had quite a few just to give a good…er .. opinion. Anyways….

So Why’s Smirnoff Ice doing this?

Well, they’re actually gonna be reinventing Santa in the coming weeks, and bringing him to all your favourite drinking spots around KL to reward people drinking Smirnoff Ice. And when we say rewards, we MEAN rewards.

Check out all the freebies on the Smirnoff Ice Facebook Page here.

Actually no. There’s a common myth that the world’s biggest softdrink brand created Santa, but the truth is Santa didn’t appear overnight. Here’s what he looked like back in the 16th Century… Father Christmas from the 16th Century – From Wikipedia

Yea we know, he’s actually kinda creepy looking. If he showed up in our room in the middle of the night, we sure call Polis adi.

Then we got this supremacist with his ‘elf’. Closer to the 20th century, he evolved into this. and finally into the Image we’re used to today… Sorry la, you know how we like to write long long. ANYWAYS, if there’s one thing for sure, Santa changes over the years to adapt. And since Santa’s now in Asia, perhaps he needs another level of evolution….BUT FIRST, the biggest problem is that Santa was actually created by and for Angmohs, who obviously have things like SNOW, and er… reindeer.

So we need to find out… what makes the current version of Santa so unsuited to current climate conditions? (for obvious reasons, probably best you keep religion out of this one yea)

You can use words, a picture or whatever, and we’ll do the rest (including if you like, getting our super talented graphic designer, Dominic Chin, to illustrate your ideas!) Fill in the form above before 1st December 2014 and let’s hope there’s something very very holly from Smirnoff Ice in your stocking this year 😉

There are 3 crates of Smirnoff to be won for the first 3 winning entries received, and other Smirnoff premiums for everyone else!

In the meantime, if you LECEH to join, then remember, there are many other ways to win and make this year’s Christmas EXTRA Chrismassy at www.facebook.com/SmirnoffICEMY

Share this article:
NAH, BACA:
This 3-year-old Malaysian toddler has to pay income taxes?! Is that even legal?