Malaysia is an up-and-coming country, with skyscrapers, malls, and roads flung across the entire cityscape. However, some say this first-world infrastructure means nothing in the face of third world mentality.

We at CILISOS would like to remain optimistic about Malaysians. We might be kiasu a bit when it comes to lining up for toys la, but we’re good in the overall sense. What’s not good however, is that some buildings we’ve built are crumbling, despite the fact that they should last longer than us.

But before we start on the list, we just want you to know that any humour in this article is just for the sake of prose, okay? There’s nothing funny about tragedies and death. Now that we’ve got that out of the way, come, let us take you on a journey through our darker histories, from just relatively expensive, to unfortunately, most fatal. The first thing people think about when looking at a stadium is the marvel of spectator sports and the frenzy of the crowd. Have you ever watched a match where the cheers were so loud that they threatened to bring the roof down? Well thank God there wasn’t a crowd when the Sultan Mizan Zainal Abidin Stadium’s roof collapsed, literally.

In June 2009, the stadium’s east wing took a dive (oh wow soccer puns), and fortunately, no one was present. After what has got to be the longest clean-up, the roof collapsed again. A beam fell during repairs and removal, and this time, the workers kena. Boh song lor, to say the least. Is it even safe for the rescue team to be up there? Photo credit: straitstimes.com

So your friend on Facebook shows of their latest Penang trip, and what updates do you see? That’s right. Food, glorious food. In fact, so many people go there to makan CKT that they need another road to the island to alleviate the traffic.

And in June 2013 (why are all these things happening in June?), a part of that second bridge fell. The Kelisa and its driver parked beneath didn’t stand a chance 🙁 Again, it was caused by negligence during construction. As an expert put it:

“The scaffolding must be able to withstand the superstructure and horizontal loads as well as the additional hydraulic pressure of fresh cement. It takes five hours for the concrete to harden before it can carry its own weight. Before that, it relies on the scaffolding to hold it in place.” – Dr Mahyuddin Ramli, The Star

With our limited construction knowledge, we still find constructions like these over a road that’s open to public quite the dodgy, as depicted in the photo below. Yes, it was that old. Photo credit: skyscrapercity.com

Not to be the bearer of bad news, but if you have memories of shopping in Jaya Supermarket,  you’re most probably old. Perhaps it was the lack of shopping malls, or maybe its location was just that ong, but Jaya was the top choice of mall-dwellers besides Atria and The Mall.

This time, the problem wasn’t construction, but from demolition works. Specific reasons of the failure were unreleased to the public, and despite the contractors submitting their reports for investigation, the public was left in the dark regarding further development.

There was also the hoo-haa about the contractors not getting approval from the Department of Safety and Health (DOSH), while holding the green light from MPPJ. And then there were accusations of contractors using explosives, which they denied and countered balik that the demolitions code in Malaysia was self-regulated. Very messy la, in essence. Tally: Unconfirmed, though technically the building was slated for demolitions.

Artist’s impression, though we doubt it’ll be this unpopulated. Photo credit: propertyhub.com.my

Now this is the kecoh one. It’s the one that caused much furore, and it was also the inspiration for this article. The reason why it irked Malaysians was the fact that it happened on the roads that people take to work everyday. The other reason was that there were multiple cases linked to the MRT/LRT saga.

NAH, BACA:
The oil price crash might mean cheap petrol, but it's not exactly a good thing for Malaysia

Surely, you’d expect the authorities to be extra-kao-tambah-extra careful, what with the construction zones stretching all along the busiest roads in the Klang Valley, right? Or do we need to be careful ourselves as well? … and not worry their socks off about something falling on them.

First case, March 2013, equipment in transit fell and crushed two cars in Subang Jaya. This brought to light how the average cari makan commute was going to change. Barely given enough time to recover, Malaysians were subject to yet another scare, when initial news reports believed that the tragedy involving a falling beam—which crushed a restaurant worker and his employer—“was for use in the MRT project.”

After that came the Kota Damansara incident, where a 300 tonne beam crushed three people.This was the straw that broke the camel’s back where MRT was concerned,causing MRT CEO Datuk Wira Azhar to resign. MRT rejected his resignation however, as he actually did oversee progress throughout the construction. 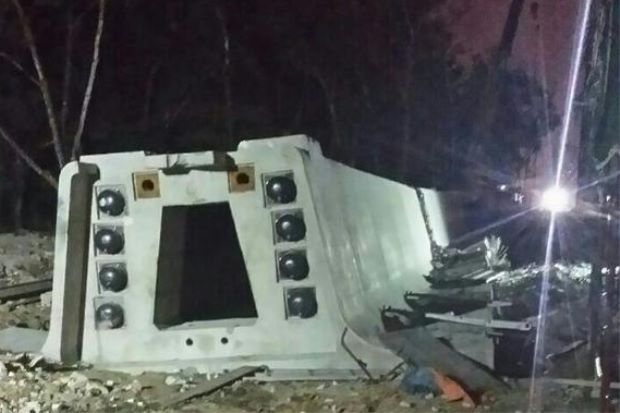 The 300-tonne beam in the Kota Damansara case. We know it’s a bit untasteful, but i you look closely, you’ll see its horrified face. Can. Not. Unsee. Photo credit: thestar.com.my

Resolution: Besides Datuk Wira Azhar’s resignation, the only other action was our Prime Minster’s call for a probe. The Sultan Abdul Halim ferry terminal tragedy is lesser-known among the young ‘uns, despite it being the talk of the town for weeks on end after its happening. Don’t believe us about it being a well-known incident? Ask the older generation about the 1988 disaster and they’ll tell you all about it, despite not having the social media grapevine of today.

Where construction was concerned, it was not a planning fail la per se. It was more of a ‘perfect storm‘ situation. Not a real storm, but the combination of circumstances that aggravated a situation drastically.

First of all, there was a freak crowd of 10,000 people due to the clash between two celebrations: the St Anne’s Feast in Bukit Mertajam and a rare Kwan Yin Goddess festival in George Town. All the passengers were on the pier’s second storey—the one below was meant for cars. The pier, not built to withstand such a weight, crumbled under the stress.

Passengers that survived the fall had to avoid being crushed by the debris, and find a way out of that death trap. Surprisingly, grandfather stories provide more information than the internet (results barely made half of the first page) regarding this issue, but that doesn’t make it any less tragic. Aaand this is the big one, and we bet ugaiz saw it coming. December 11, 1993, a date etched into many Malaysians’ minds, mainly because it was one of the most horrific collapses the country—actually, you could even make that the world—has ever seen.

It was so devastating that it made this person’s list of the world’s top 10 building collapses. It also prompted aid from Singapore, France, Japan, UK, and US. Another ‘perfect storm’ incident, factors like the installation of pipes under the building’s grounds (which would burst), the clearing of trees nearby, and a crazy 10-day downpour of rain all congealed into one big landslide, causing one of three towers to crash.

Eerily, rescue teams reported knocks and cries for help even seven days into recovery efforts. Now, the remaining towers stand as a stark reminder of our history, with people reportedly going to the grounds to look for hantus. Resolution: Dropped civil charges against 10 parties, including the Selangor government and the Ampang Jaya Municipal council

We can do better than this. Perfect photo for the next paragraph. Photo credit: hugolim.com

Yes. Nobody wants tragedies to happen, but even in the face of disaster it’s always important to remember what we have. We have our KL Tower and the Petronas Twin Towers as the country’s architectural landmarks. Also, we’re willing to bet that more foreigners have been up the towers than ugaiz right? Don’t lie.

And we also have the SMART tunnel, which is one of its kind in the world. We even have a documentary episode dedicated to this feat of engineering alone. Also, don’t think countries with huge advancements in infrastructure don’t go through the same thing. South Korea, a country with streaming videos in buses instead of the pre-loaded ads in our Rapid KL counterparts, have had a couple great disasters as well (to be fair, the first was caused by snow). Even countries like Canada have had their share of casualties when a shopping mall’s roof collapsed.

So despite the best technologies and methodologies, misfortunes can still occur. However, what worries us is a lack of consequence to those in charge. Aside from Azhar, who resigned for the LRT misfortunes, many of the other cases remained unsettled. Given the mount of deaths resulting (particularly for the poor migrant workers), it indicates that people can, in fact, get away with murder.

For us here at CILISOS, we believe that’s the real tragedy in all this. Yes buildings will fall, and yes, people will get injured, but the percentage of migrants that make up the headcount is unsettling at best. This is why we wrote an article last year highlighting the three Bangladeshi men who were crushed in the MRT accident. Cos it’s easy sometimes to see them as workers, and not men.

Where buildings are concerned, it’s probably safe to say that we shouldn’t cut corners, because buildings man, they bide their time. You might get away with shoddy work for a few years, but they will definitely come back to haunt you.