Here’s a quick and dirty summary – There was an explosion at a coal mine in Pantu, Sarawak on Saturday morning, believed to be caused by a faulty electrical switch and/or a malfunctioning fan. However, conclusive investigations are slow as investigators need to determine the safety of the mine, and certain parts of it has also become flooded after a storm.

We disclaimer first: We should probably state that we’re not making light of the incident – there were 3 deaths and 29 injuries – but coal mine explosions are pretty common, with China having the highest mine-related death toll in the world.

How did this happen?? Despite how cheerfully Disney depicts the mining industry, actual miners are at serious risk of suffocation, poisoning, being buried alive, and blown up. Even with modern tech and safety standards, the US still counts an annual mine-related death toll numbering in the tens every year.

But pertaining to the case at hand though, mine explosions happen for one of two reasons:

1. Methane explosions – Because it’s a byproduct, you’d find methane wherever you’d find coal. Keeping in mind that conditions in mines are very narrow and very deep, there’s a high tendency for the gas to build up. So all you need is a spark, and, BOOM! Excplosioms. Here’s a video explaining it.

2. Dust explosions – We… don’t know how to properly explain this without you closing this window and watching Taylor Swift videos, so lets just say that when fine dust particles start floating in the air in high quantities, they have a tendency to cause a chain reaction and go BOOM! Excplosioms. You can read the wikipedia article or watch this science experiment video for more info.

Now that the explosion thing is out of the way, on to the next question: So yea, one of the three dead workers is North Korean and a few more were injured. Considering how most of the us (and the rest of the world) have an opinion of North Korea being this horrible place where the only people who get out are defectors or high-ranking officials, it really was a surprise to hear about them working in Malaysia.

Meaning that North Korea is aware that these people are here. In fact, North Koreans were the most common race in that mine – 46 to be exact out of 115.

NAH, BACA:
Which mysterious law did PDRM use to arrest 2 Aussie reporters?

What are North Koreans doing in Malaysia?!

As we’ve pointed out in a previous article (Which you probably have not read), Malaysia and North Korea are on pretty chummy terms; we were the first country to be able to fly into North Korea without a visa, our rice is grown using North Korean technology, and HELP University has awarded Kim Jong Un an honorary doctorate in Economics.

So other than workers, what other kinds of North Koreans are in our country?

Businessmen – We managed to find a news article from 2007 about a North Korean businessman and his worker who were found dead in Sibu, along with a mention that the construction firm had been operating here “for years.”

Students – The student thing we found out rather by accident, when a South Korean student studying in HELP contacted us after reading our article comparing North Korea and Malaysia to inform us that the sons of Jang Yong-Ch0l, North Korea’s ambassador to Malaysia, were HELP University students. They were all recalled back to North Korea, with Jang Yong-Chol “and his family members” executed as part of a power purge.

Kim Jong Un’s Famiry Members – Several news sources have reported that Kim Jong Un’s half-brother, Kim Jong-nam, was spotted at a Korean restaurant in KL earlier this year. We think he was here in anticipation of the opening of the 20th Century Fox theme park in Genting, since he’s been caught trying to sneak into Disneyland Tokyo. We also assume that we aren’t the only ones asking this question as Deputy Home Minister Datuk Seri Wan Junaidi Tuanku Jaafar has acknowledged that North Korean mine workers are hired for their discipline, dedication, and toughness; and that these workers are only allowed in Sarawak and not Peninsular Malaysia. 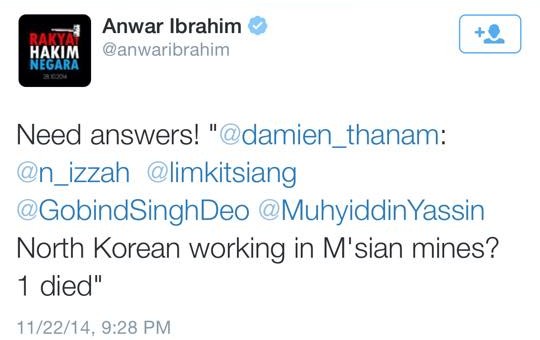 Apparently it’s not a secret that North Korea “exports” its citizens to other countries as laborers. The earliest records of this is from the early 90’s with news of North Koreans working in Russian logging sites. They’re also sent to the Middle East and some European countries such as Poland and the Czech Republic. There are also a whole bunch working legally and illegally in China, where they are highly valued as cheap labor.

So here’s the question of the day: Are you surprised to find North Koreans in Malaysia?

On another note, we managed to write a whole article about North Korea without using a single Kim Jong Un meme!