So over the weekend, a Malaysian TV producer named Farihin Abdul Fatah was arrested on charges of terrorism in the UK while driving in from Ireland to the UK. The cause was apparently a chemical in the group’s belongings that was suspected to be a form of explosive. Ironically, they were shooting a TV docu called Salam UK, about moderate Muslims.

Unfortunately, things like this have a knock-on-effect. Not only does it cause panic among the locals in the UK, and create a harsh impression of Malaysians among our former Engrish rulers, but it also makes Malaysia look like a terrorist hub in the eyes of the world.

Thing is, thousands of Malaysians travel to the UK every year… so why was this one man targeted?

Astro Awani, one of the first to cover the incident pointed that “he has to pay a heavy price for growing a beard”. Unfortunately, this is probably the first thing that most news outlets and people on Facebook would grasp upon – that he seems to have alot of Jawi on his Facebook and that he has a beard. Of course, when our friends at The Rakyat Post posted this mugshot (goatee and intense face a must!), it didn’t help much to alleviate those fears. Farihin Abdul Fattah is a very young looking, 49-year old freelance producer. His claim to fame was as the producer for the nasyid group Raihan. We went on his public Facebook profile, and found the picture that TRP took, along with this much less scary one. The guy on the left actually looks scarier. – from Farihin’s public FB page

Beards are actually a very normal thing for Muslim men. According to this very strangely dedicated site, they talk solely about how the beard beautifies the man. We managed to contact a few of his friends, most of whom said that while religion was obviously important to him, he never felt the need to actually push it upon others. Amazingly, Some didn’t even know he was arrested, and were shocked at the revelation. R Zaid, a sound engineer, was willing to go on record.

“Well he practiced the normal Muslim practice like praying and all but he never come across as somebody who is pro-islam and all,” – Zaid, a friend of Farihin.

And to be honest, it isn’t difficult to paint a picture based on his Facebook account alone. For instance this picture. 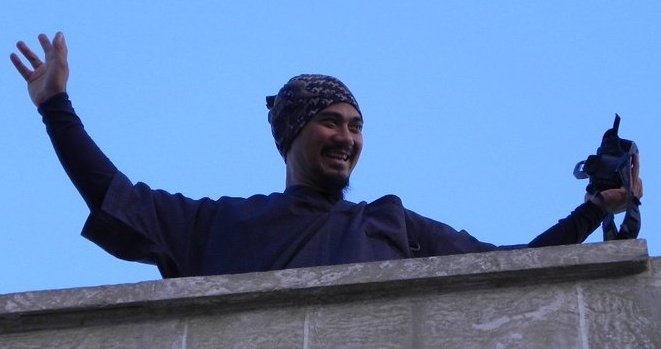 Farihin has a passion for covering horseback archery events. Don’t know what that is? It’s the extremely niche sport where these badass archers shoot at itty bitty targets WHILE riding on a horse. 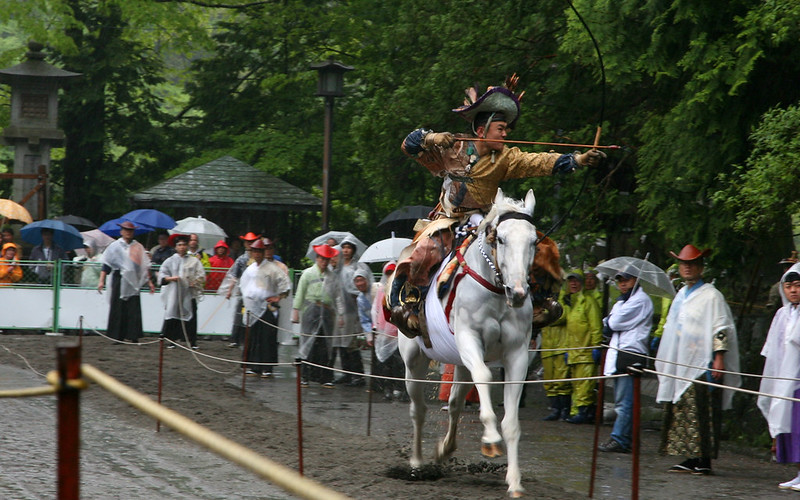 Oh and did we mention that they do this while wearing outfits right out of a Korean MMORPG? Anyways, there’s an active Malaysian scene, and Farihin apparently covers it pretty often, occasionally leading him to countries like Turkey and Jordan. Did you see it? No it wasn’t the word JIHAD (which actually means struggling of any sort for your religion, not necessarily at the expense of infidels). It was this dude. Who we are about 90% sure is the same as this dude. …who broadcast on social media about firing a couple of rounds at Basyar troops in Syria, came back, and THEN did the above conference. While we say pretty fair association with this one, this isn’t the only time that Farihin has been a panelist. A few years ago, he was even a judge in a local reality show called MyStarz by LG. In fact, he’s a well-connected person in the music scene in Malaysia.

Ok, so let’s do some namedropping. Back in his hey day as producer for religious pop group Raihan (which is incidentally only one of 3 bands ever to perform at Wembley Hall), he worked closely with luminaries like Tony Fernandez and Jason Lo. Ironically, at the time that he was arrested, he was in fact, working on a program ironically called…Salam UK, which apparently reports on moderate Muslims in the UK. Aiyo.

Ironically, one source close to his family claimed that the reason behind is jailing were just that he was an Islamic musician. Which is just plain bad timing, after this British rocker mum of two went nuts and joined ISIS. 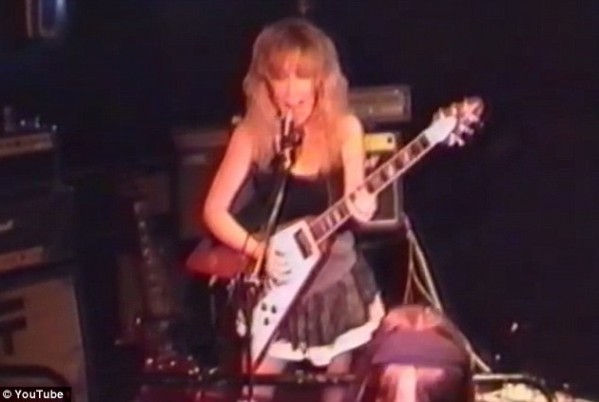 Admittedly, Malaysians have been getting a bad rep overseas cos of a few of our boys n girls jumping over to ISIS for reasons unknown. Furthermore, Malaysia has a bit of a history with terrorism. The guys behind the Bali bombings were apparently from Malaysia, and we have quite a few of our countrymen running to join ISIS.

But lately, the government has been absolutely solid in its stance against terrorism, denouncing the acts in Syria, declaring ISIS officially a criminal organisation, and even catching ISIS members at KLIA just two days ago.

Theory 5: The world is scared of everyone right now. Of course, part of the reason behind this stance is that the world has been super paranoid ever since 9/11. Even Sharukh Khan was strip searched in the USA TWICE. Ya serious. He even made a movie about it.

The UK also had its fair share of scares. Farihin was arrested under the Terrorism Act of 2006, which is a fairly recent, and heavily debated UK law, which they hurriedly put into place after these attacks back in 2005, which killed 53 Londoners in the middle of rush hour.

So it’s like our ISA? Well sorta. Farihin was charged under Schedule 7 of the Terrorism Law of 2006, which is noticeably tamer than our ISA. So this part of the law deals with Border controls, only allowing for 9 hours of imprisonment. Belongings, however, can be kept for up to 7 days. Strange then that Farihin was kept for 48 hours, although he told friends and family that he was being treated well.

We can understand the fears of our poor Western counterparts, but when someone is targeted seemingly randomly, it’s a very scary prospect for the rest of us (perhaps like….. our ….sedition act?).

One of his friends who got in touch with us still holds a UK citizen, and vowed to do what he could to prove Fatihin’s innocence.

“Musician, producer and a family man. He was a kindred spirit with a countless giving soul. A lovable humanitarian with a soft heart. Am shocked to hear he was detained for being a muslim musician. What is this world coming to?!” – Jason Cottam

So what was he really arrested for?

Well, to start, it was probably the liquids that resembled explosives in his crew’s caravan at the border. And to add, also because he had a beard, and he was Malaysian, and he was Muslim. That is, unfortunately the world we live in today. You would unfortunately find it less likely to arrest say a Buddhist Monk than a Muslim musician.

But that’s also because understandably, alot of the world’s terrorism acts (especially those that happen in civilised areas) are in fact done by Muslim extremists. Can we really blame people around the world for being a wee bit more suspicious?

Thankfully, halfway writing this article, we found out that Farihin has been released.

We don’t know the details yet, but by the time you read this, he should already be back in Malaysia. We have received a text from the man himself saying that he is unharmed, but tired.

Of course when we seem him we’ll ask him the burning question on everyone’s mind – will he be shaving before his next trip?

We say, wear it with pride 🙂