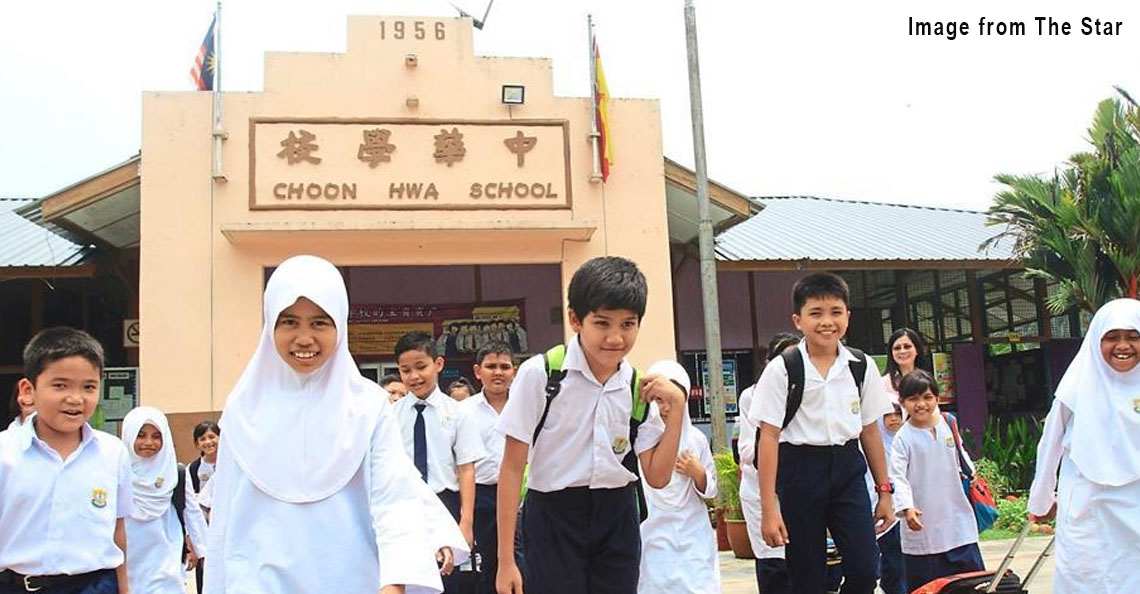 [Ed’s note: This article was originally written in March 2018]

Vernacular schools have sparked debate from some Malaysians, calling for them to be abolished. Some believe that segregating your kids causes disharmony between the different races. Some said that vernacular schools are wayyy too outdated – they belonged in the colonial era, and have no place in Malaysia.

Dr Sivapalan Selvadurai from the National University of Malaysia found that support for vernacular schools stemmed from a fear of losing their cultural identity.

If you don’t believe us, try telling any of your typical Chinese aunties or uncles you can’t speak Mandarin. This writer often gets outrage and disbelief that she’s disgraced their culture by not speaking their mother tongue or gets a long lecture on why you should learn Mandarin. Confirm some bananas can relate to this quote from Mulan. Img from Pinterest.

We found out that non-Chinese students comprised 18% of Chinese-language primary schools in 2016, according to Education Ministry Statistics, or almost 1 in 5 students. The enrolment of non-Chinese students actually rose by over 20% between 2010 and 2014. Compared to more than 90% Malay population in kebangsaan schools, it looks like Chinese schools are actually more racially diverse.

And remember when Ridhuan Tee Abdullah called Chinese schools racist? He allegedly called Chinese people “ultra kiasu” in his column in Sinar Harian, so you can guess why it got everyone all fired up. Buuuut he’s not done – he also claimed that ethnic Chinese were ungrateful to the gomen for ‘tolerating’ Chinese schools.

Despite all the drama in the vernacular schools debate, CILISOS decided to dig a little deeper into the possible reasons why so many non-Chinese are deciding to enroll their kids in Chinese schools.

There’s no one better to ask than the actual non-Chinese students who attended Chinese schools, right? There are even some Chinese schools where Bumiputeras outnumber Chinese, such as SJK (C) Chung Hua Batu 10 in Kuching and SJK Chung Hua Debak. 40% of students from SJK Chung Hua Batu 10, Kuching are Bumiputeras. Img from sjkchbatu10.blogspot.com

One of them is former CILISOS intern, Natashya Khoo. She’s a mix of Chinese, Indian and Malay, and went to a Chinese kindergarten before attending Penang Chinese Girls High School  – thanks to her Chindian dad. Her dad regretted not learning Chinese as a kid, so he believed she should have the opportunity.

“I really hated it initially because I was super lost – I didn’t understand what everyone else was saying. It definitely helped me a lot, knowing an additional language and it’s fun when other people are shocked that I can speak Chinese” – Natashya Khoo

Another student we talked to was Ezra Pritivi, who’s an Indian who attended SJK (C) Chen Moh in Petaling Jaya. His parents wanted him to be able to experience different cultures. He shared his personal experience being an ‘alien’ amongst his classmates, as some of them would avoid him because he was different.

“But as the years go by I made more friends and adapted to a new culture. It makes me feel good cause I believe it adds to my personality, such as tolerance and the will to adapt and try new things” – Ezra Pritivi

A Malay father decided to send all 4 of his children to Chinese kindergartens and primary schools as he wanted them to learn a new language, as well as generally exposing them to a different culture. The eldest daughter, Izyan Saihah who attended two different Chinese primary schools (SJK (C) Khe Bang and SJK (C) Chung Hwa) spoke to us about how her father believed learning Mandarin would be beneficial for their future, as Mandarin was a universal language.

“The toughest part of Chinese school was the amount of homework I had everyday, but it was good training as I do see myself being more disciplined when I’m working” – Hanie Farah

For one, parents are spoilt for choice when it comes to Chinese vernacular schools in Malaysia. Chinese schools have existed in our country ever since 1923 when Chung Ling School of Penang opened its doors. Who knew so many non-Chinese wanted to learn Mandarin? Img from the Malaysian Insight.

However, the term ‘Chinese schools’ can get a little complicated la. Turns out, some Chinese schools even use Bahasa Malaysia as their medium language. There are two main types: gomen-aided and independent schools.

Firstly, there’s SJK (C) type schools, which are partially or fully aided by the gomen.  They use the national curriculum and their students even sit for UPSR examinations like a kebangsaan school. Then there’s independent high schools, which are basically private Chinese secondary schools. The syllabus and textbooks are prepared by United Chinese School Committees’ Association of Malaysia (Dong Zong). They also prepare and conduct their own version of SPM, which is called the Unified Examination Certificate (UEC) for their students.

Here’s an easy infographic if you’re already confused by the difference. Img from Malay Mail Online.

There’s been some drama as UEC is not recognized by the gomen as a pre-university qualification like SPM, despite being recognized in many private universities both locally and abroad. The Education Ministry cites the differing national syllabus standards and alleged contradiction with the National Education Policy. DAP have even accused the Education Ministry of making it a political issue.

NAH, BACA:
Malaysian students who commit crimes are jailed. But they continue their education and graduate

According a study done by the National Education Advisory Council, Chinese vernacular schools could potentially become mainstream schools in 10 years.

On the other hand, Tamil schools in Malaysia are in a sad state that are nowhere near Chinese schools. There are about 523 Tamil primary schools in the country, but the majority of the schools seriously lack basic infrastructural facilities, such as computers and libraries. There also isn’t a SINGLE Tamil secondary school in Malaysia, compared to the total 81 Chinese national secondary schools. Unlike Chinese schools, there isn’t a unified association representing all Tamil vernacular schools and no Tamil syllabus for Tamil-medium secondary schools as they simply don’t have the staff to translate the national curriculum.

But it’s not because people aren’t trying to get a Tamil secondary school either. In fact, Lim Guan Eng had actually sent three application letters to the gomen in 2013 asking for a secondary Tamil school in Penang. All three of his applications were rejected since there’s no law that provides for a secondary Tamil school. You can click here to read more in an article we did last year on why there isn’t a Tamil secondary school in Malaysia.

Remember at the beginning where we told you that Malaysia’s Chinese education is world class?

As of 2017, outside of China and Taiwan, Malaysia is the ONLY country that has a complete Chinese education system. Malaysians have the option for their children to start school in a Chinese-medium kindergarten then study all the way up to a Chinese university, regardless of race. It is also the only country in Southeast Asia that has maintained the Chinese education system established during the colonial era. There are even a few Chinese universities in Malaysia, most notably the spanking new Xiamen University (XMU) in Sepang. It’s Malaysia’s first overseas Chinese university campus that was opened in January 2016, after an agreement was signed between China’s President, Xi Jinping and our ex-PM, Najib Razak in 2013.

“The establishment of XMU Malaysian Campus is very meaningful in terms of bilateral relations. This is the first overseas campus approved by the Chinese government to be set up by a Chinese university” – ex-PM Najib, on XMU Malaysia’s website, via the Star.

XMU is the first overseas campus for China’s renowned Xiamen University in China’s Fujian province, which has been open since 1921. The founder of the university was a fellow Malaysian business tycoon, Tan Kah Kee who was a prominent industrialist in Malaya in the 20th century. Fun fact: The same person founded Nanyang Siang Pau in 1923! Tan was a generous philanthropist who donated millions to University Malaya and Singapore’s Raffles College.

Eh, even Robert Kuok donated RM135mil to the building of the university! What’s RM135mil when you’re Malaysia’s richest man, right? According to the China Press, Xiamen’s arrival on Malaysian shores seals the deal on why Malaysia’s one of the best countries for Chinese education.

All this talk about Chinese schools brought an interesting question: how does it compare to Singapore? Despite our similar colonial era history, our education systems were surprisingly different. According to Singapore Infopedia, Chinese and Malay-medium schools has virtually disappeared since the 1980’s. All schools in Singapore are English-medium schools these days. Buuut Singapore does have a bilingual education policy, which still teaches the three mother tongue languages: Tamil, Chinese and Malay, making them compulsory subjects.

Vernacular schools help some Malaysians stay connected to their roots Quite a few parents are opting to send their kids to kebangsaan schools these days, like this writer who went to a kebangsaan school where almost half the students were Chinese. Maybe because some parents had heard the horror stories about how tough Chinese schools are, with their ultra strict teachers, super competitive environment and back-breaking amounts of homework.

“The workload is intense, and the competitive nature in every class causes quite a lot of stress. Every student is vying to be the best in their class. Mentally, it took a toll on me. Every extra mark counted” – Daniel Mak, former student at SJK (C) Tsun Jin Primary School, via South China Morning Post

With China’s booming economy, more parents want their children to learn Mandarin so they can compete for more job opportunities in Chinese or multi-national companies.

It’s still a cultural choice for many Malaysian Chinese, with most of them wanting to stay more connected to their roots. However, there are still many who oppose vernacular schools in Malaysia, blaming them for increasing disunity between the races and the alleged neglect of the national language in vernacular schools. Others claim vernacular schools are causing a major decline in command of the English language.