You guys probably know the story about SMK Seri Mutiara Form 3 student Britney Nicole who was told to leave school for wearing the baju kurung uniform. Their rule is, only Malay students are allowed to wear it. Principal Mohd Amir Abdul Ghani said was just a misunderstanding and that students just need to button up all the way. But Britney’s uncle, Lawrence Jayaraj insisted that the rule exists, dating back to 2009. Gahhh! Which is it now? So confusation!

Is your head spinning head? Ya, school rules have a tendency to do that sometimes, kan? Remember all those rules and practices we used to kena tangkap for by pengawas-es in school? Some of them annoyed us and some of them were downright whacky. One of our writers recalls a rule in a girls’ school which required students to curtsey while greeting the teachers. Downton Abbey much?! LOL! “They cancelled V-Day celebrations at school after two Form 2 kids were spotted smooching or something. The guy had given the girl a bouquet and following that, Interactors and Leos couldn’t sell stuff for V-Day. We still did, but called it Friendship Day instead. Haha.” – Nabilah Hamid, 25, Performer, Secondary school in Subang Jaya

2. No long nails… unless you’re a guitarist “Cannot have long nails unless you’re a guitarist, but then only on fingers required to pluck. Certain fingers on one hand can be long, depending on the guitarist. Thumb and index fingers, if I remember correctly” – Aiman Azri, 28, Editor, Secondary school in Sri Hartamas “Girls school here. We were all only allowed to wear skin-coloured bras. Yes, the prefects would inspect from the sides of our pinafores, if not through baju kurung. Once, a student was called out because she was wearing a black bra… to which she retorted, ‘You said skin colour mah!’ Said student was Indian btw.” – Rachel Law, 25, Writer, Secondary school in Pudu, KL “For a while, they used a Kilometrico pen to measure the length of your fringe. If you pass the ‘K’, kena potong. The top and the fringe… they start from the top of the pen till the ‘K’. Means, the top of the pen cucuk on our head, they pull the hair upwards.” – Brendan Teh, 29, Production Engineer, Secondary school in PJ

5. No boy’s phone number in your book 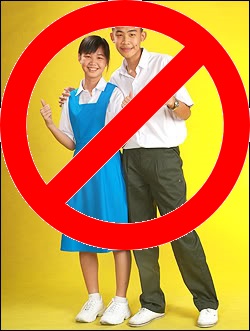 “Not a black & white ban la, but I was questioned about having a boy’s phone number in my mini keychain phone book.

Lemme cerita sikit: This was back in 1997. I just transferred to this co-ed school. Few weeks later, boom, spot check! Teacher went through my stuff, found my mini keychain phone book and questioned me: ‘Why do you have so and so’s phone number here?’ This dude’s a well-known bad boy btw. I told him: ‘Erm, coz he gave it to me la.’ Teacher: ‘Kalau saya panggil awak naik atas pentas, masa perhimpunan, macam mana?’ Me: ‘Panggil lah, Saya tak buat salah.’ Teacher: ‘Betul ni?! Saya panggil awak atas pentas.’ Me: ‘OK.’ He never did.

Cannot ‘couple’ also. Those who are guilty of that had to go through counselling and break up in front of the counsellor. Bodoh gilerr babeng. Like giler babeng.” – Zara Nasarudin, 32, Features & Lifestyle Editor, Secondary school in Bandar Baru Bangi That secondary school in PJ. Image from Batman… sort of…

“We can’t wear white tees inside coz idk why. Haha. Also since it’s a boy’s school, I did spot some rule on a government-sponsored discipline board saying, ‘dilarang berkelakuan seperti pondan, bohjan, etc.’

Then we would have free haircut sessions during every assembly. One thing lacking is that teachers don’t charge students.

Cannot bring phone, but everyone still brings. We also have this thing called the DC line, where prefects would have cards with everyone’s name in it, with the listed offenses ranging from codes D,U and M. Meaning Discipline, Uniform and Major. But since I was a prefect, none of the above mentioned really bothered me. I enforced them. Hahaha.” – Batman, 19, Student, Secondary school in PJ “My secondary school actually outlawed plastic mineral bottles coz the headmistress said drinking from them, made it look like we were drinking alcohol. Hahahahaha. We had to go buy like tumblers or sports bottles.

Ironically one of my friends resorted to using a beer bottle that looks like one of those Ikea bottles with the snap off cork? This is before Ikea had those bottles… I think.” – Amelia Chen, 31, Actor, Secondary school in Taman SEA “One of the lightly enforced/for-show rules in our school, that the minimum distance between a boy and girl can be seen walking or talking together (during break time or outside class) is the length of their arms stretched, finger tip to finger tip but can not touch one another. Lightly enforced only la. The headmistress got musim for these kind of stuff.” – Bacon Superman, 27, Editor, Secondary school in USJ 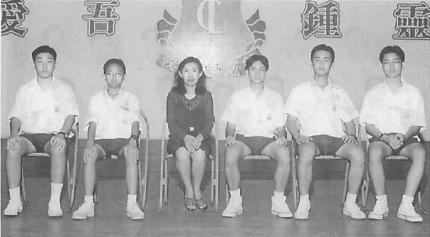 “Secondary Chinese school boys must wear green short pants that cannot cover the knees. Only prefects could wear white long pants. We also heard from friends that Penang Chinese girls’ high school, cannot have photos of any boy in your purse. Cannot be fetched on a bike by a male, even if he is your brother.” – Alvin Looi, 40, Group Exercise Manager, Secondary school in Georgetown, Penang

10. Speak only in English or BM “My school said we (all-girls school) can only wear black, white, blue or maroon (school colour) hair accessories. Also, if you speak any language other than English and Malay, and you get caught doing so, you will be given demerit points. Pff. Face of wrist watch must be no bigger than the old 20 cent coin.” – Sasha, 26, Free spirit, Secondary school in Ipoh

11. No plucking your eyebrows “No plucked eyebrows or the school ustazah has a field day on your face with a permanent marker. About eight girls were walking around with a big marker unibrow and the teachers all thought it was funny. Unibrow summore!

There was one time when we were supposed to pray and only about five girls were praying, the rest claimed to have their period. The ustazah felt them up to check!” – Rosheen Mutalip, 31, Theatre Manager, Secondary school in Kuching, Sarawak Unedited image from What the Flicka?

“My secondary school, no tissue. Seriously. Especially for someone who has sinus problem, the thought of using the same handkerchief again and again is very, very unhygienic. The rule was enforced in 1998 when I was in Form 1. According to the Pembantu Pengetua Petang, it was to curb littering tissue paper in the school compound.

It was only in Form 2 in another classroom that I only realised one of the reasons why they banned it… some mischievous students threw wet crumpled tissue up so that it stuck to the ceiling.” – Wei Wong, 29, Secondary school in KL

So should schools be allowed to set their own rules?

Minister of Education Tan Sri Muhyiddin Yassin warned all schools not to set their own rules outside of Ministry regulations.

Why do schools do that in the first place? Well, we have a theory. Sometimes teachers get transferred from one school to another. Sometimes it’s far far away in another state. So maybe they bring their previous school traditions into new environments?

As teachers, they can propose new rules during meetings, as Pengetuas they have even greater influence to change school rules directly. But this is just a theory la. It’s no picnic for the teachers either. New school, new colleagues, new students… and they have to look for new houses. Not cheap! We know for sure that this state transfer practice is not something all teachers look forward to. Especially those who already have their own families. Some of them have to travel long-distance to see their spouses and kids back home. Read one teacher’s story here.

Whatever the rules were, they made our school life very memorable. So you see, the Education Ministry’s rules are there for a reason and schools should probably just stick with the…………….uniform!

Share this article:
NAH, BACA:
5% of Malaysian kids can't actually read properly. Here's what we learnt from them (!)