In recent light of yet another ‘they-are-going-to-abolish-vernacular-schools’ scare, the Education Ministry tried to calm people down, saying it was not true.

Here’s what happened… a video of Malay teachers (believed to be from Universiti Teknologi Mara) speaking fluent Mandarin in a debate setting went viral. The video also had a caption claiming that these teachers were being trained in Beijing and would soon replace Chinese teachers, eventually wiping out Chinese schools altogether.

So then Deputy Education Mi­­nis­­ter Datuk Chong Sin Woon dismissed the rumours, explaining that these teachers were being trained so that they can teach kids in KEBANGSAAN schools, not vernacular schools.

Malaysia has sent hundreds of Malay teachers to Beijing since 2007 It is a five-year teacher training programme at Beijing Foreign Studies University (BFSU) and Beijing Language and Cultural University (BLCU), for Malay students without any foundation in the Chinese language. Not long after it started in 2007, other institutions came on board to sponsor more students, like Mara and Sime Darby.

BUTT the mainland Chinese teachers are super demanding, many of the students can tell you that! Kelantanese Shah Farid who was sent to BFSU in August 2009 as a 18-year-old on a Mara scholarship would practice writing characters on the fogged up bathroom mirror as he brushed his teeth:

“We were given 50 words for spelling quiz every day!” – Shah Farid, The Star Another student, Mariam Md Noor Other related how the lecturers would emphasise pitch-perfect intonation and made them read tough literary masterpieces like ‘The True Story of Ah Q’ (not related to Old Master Q) by Lu Xun. By the end of the course, students become fluent in Mandarin complete with mainland accents and have a penchant for Hong Kong dramas! 😀 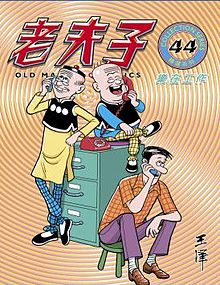 Not a literary masterpiece, but if you learn Mandarin, you can finally understand what’s going on in this comic

Those sponsored by the Ministry continue on one and a half years of a teachers’ training programme (called Diploma Perguruan Lepasan Ijazah (DPLI)) in Malaysia, then they are placed in national primary schools. So how do people get picked for this? Here are some testimonials from those who went to Beijing…it’s not by application or anything, Syazwan, who never expected he would become a Chinese teacher, one day received a call:

“The Education Ministry was ringing me up, asking me whether I was keen to learn Chinese in China. I was puzzled and hesitant, wondering whether I could really pick up the language at all. I later gave this idea some thoughtful consideration, and decided not to give up this opportunity.” – Syazwan said on Sin Chew Daily

Another guy, Rozaid said that he had originally applied to become a Science and Maths teacher, but the Ministry called him to ask if he would accept “another profession”. He just agreed without knowing what it was, until he received a letter from the Ministry, lol.

But all’s well that ends well. Some of these students who have returned home are now teaching Mandarin themselves. There are plenty of great stories from blogs of those who went on the programme you can read.

Numbers wise, the Deputy Education Minister revealed that in 2007 and 2008, they sent 10 students each year, then in 2009 and 2011, they sent 54 and 6 students respectively. In October 2016, Bernama reported that there were 403 students sent by the Ministry, as well as 29 students sponsored by Mara and 25 sponsored by Sime Darby.

Now they’re back, they want to improve the way Mandarin classes are taught in national schools Mariam is now teaching in sekolah rendah. Image from The Star

Once the students are ready to become teachers, they have to serve for eight years, while those sponsored by Mara, they will be sent to tertiary institutes to teach for at least five years. Norhazwani, for example, who was on a Mara scholarship, teaches at Mara Professional College, Semenyih. Similarly, Shah Farid, taught in Mara Kuantan (though he recently resigned to pursue a Master’s). He still remembers teaching his very first class:

“I was so nervous. I wore a well-pressed suit, complete with vest as a confidence booster.” – Shah Farid, The Star Shah Farid (standing) listens to two of his students presenting. Image from The Star

As for Mariam (Ma Lian), she was sponsored by the Education Ministry, so she became a Chinese language teacher at SK Puteri Pandan 1 in Kuala Lumpur. Last year, she had 37 students from Years One to Six.

But ONE THING all these student-turned-teachers have learned from their time in China… the Malaysian Chinese syllabus in kebangsaan schools needs a major overhaul! If they had studied locally, maybe they would not have seen the lack in our system. When Rozaid was in China, he visited their primary schools and realised there were a lotta things we could learn from them. 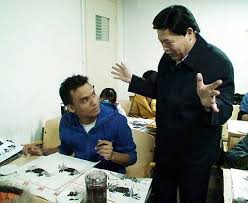 “Actually there are many problems with national schools. The Standard One Chinese curriculum is too difficult and complicated for many students. There are no parallel Malay explanations. Everything is in Chinese. The students won’t understand the sentence structure.” – Rozaid, Sin Chew Daily

And because they were in China there was no shortage of those ‘sifu sifu’ who helped them immerse in Chinese culture (besides language) – music, films, art, calligraphy, even tai chi, and so on. They really just fall in love with China!

“The teacher would draw on the blackboard and explain the origins of each Chinese character. That was when I first realised that each and every Chinese character had very deep meaning and was very mysterious. Actually, these students only need to learn the basic spoken language. But I want my way of teaching to interest my students, so I want to get into the learning of Chinese characters,” Syazwa (different person from Syazwan) told Sin Chew Daily.

Mariam reiterated the same thing and feels impatient with the overall pace of Mandarin learning here. She notes that there is a big imbalance between the number of Malaysians who speak Malay only and those who speak Mandarin.

In light of Malaysia’s growing ties with China, learning Mandarin surely has benefits

Can you feel the love tonight?

Ok sure, BM is our national language, so obviously we’ll have to learn it… English is the lingua franca, so we’ll need to learn it… but now Mandarin is gaining traction worldwide as well, so can we afford NOT to learn it?

Due to our growing ties with China, the Government is beginning to see the importance of teaching anak-anak Malaysia some ching chong. For one it increases their job prospects. Interestingly, Says reported that Kelantan has the highest number of Malays studying Mandarin. In fact, the late Nik Aziz had five grandkids studying in Chinese schools. Heck, we even have a Malay celeb, Shila Amzah who made it BIG in China singing Mandarin songs.

Apparently sending teachers to train in Beijing is one of the ways our country has been showing them diplomatic love. Maybe sounds a bit funny, but did you know we also considered sending BM teachers to Sri Lanka once to strengthen ties. BTW, mainland Chinese students are also learning BM in BFSU too! VIPs even made visits to the students in BFSU – people like Mahathir, Badawi, Najib, Muhyiddin and Khairy, etc. Besides, China’s rise as an economic powerhouse has made Mandarin the must-learn in so many countries around the world, not just Malaysia. It’s become a trend with many in the European Union, the US and African nations like Nigeria and Tanzania cracking books. Some started Mandarin classes as soon as Beijing opened its doors to the outside world!

In Southeast Asia, Thailand, Indonesia, the Philippines and Myanmar, have been sending officials to learn since 2005, so we FOMO also la.

“Languages are like bridges connecting people. We really need them to understand each other. Being able to speak Mandarin is definitely an advantage for me. If there is a chance to learn Tamil, I will be just as keen.” – Mariam, The Star