Sometimes they’re funny and bold, other times they’re just plain annoying. Streaming all across local Facebook pages from day to night, these comments remind us of why the internet is a magical place.

1. The one who always hates on Najib

There isn’t a day on our Facebook news feed where Najib gets to catch a break. Whether it’s good news, bad news, or just plain news, expect spiteful insults to pour in within seconds. These usually come with awful grammar, animalistic references, sarcastic connotations or a string of vulgarities. While Najib gets darted by ‘em meanies, he wouldn’t be PM without his fans. These range from words of appreciation to pledges of support, and sometimes even brown-nosy, kiss-uppy remarks (see image).

3. The one who always blames the organization, never themselves So the recent water rationing thingamajig has ruffled up some feathers, leaving angry citizens to blame service providers for their inefficiency. This is just one of the many, many situations organizations have found themselves in, where paying consumers are always right and never wrong…. Even if they could very well be brushing their teeth with the water running!

4. The ones who file complaints on service providers Unhappy with a service or suspect you’ve been cheated of your money? Sent an email but ain’t getting no response? Facebook is the next best thing as unproven by the swarm of upset customers who comment on posts, demanding updates, refunds and even warning potential customers with their horrific experiences. For added effect, they post multiple comments. Gotta love an angry mob.

5. The one who sings the song of heroes and sympathy What’s a lot heartfelt than an ‘RIP’ comment is someone taking the time to reflect on the deceased and the good he has done. Warm and sincere, these often boost our faith in cyberspace humanity.

6. The one with valid questions Once in a blue moon, we get legit questions from commenters who are genuinely curious about the topic in discussion. What makes them even better is the string of participating commenters who share their knowledge and concerns, showcasing a real neat case of ‘mature adults in mature conversations’. Two thumbs up for these productive folks!

7. The one who loves to publicly shame… Because who doesn’t like to look smarter than organizations? There’s so much fun in being right and making fun of someone else’s wrong, especially when you’re in a bandwagon of equal-minded geniuses.

8. … and the public shamer who needs to be shamed 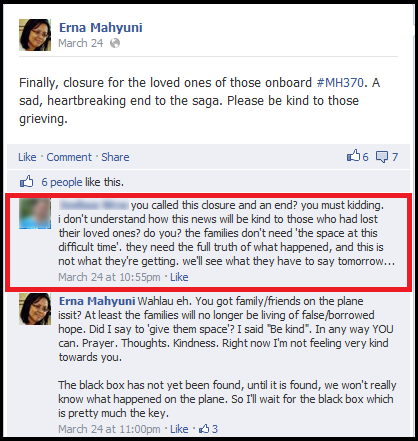 Passionate Facebook users tend to jump the gun, shaming others before realising they’ve missed the point. What do we say to these people? Check yo’self before you wreck yo’self! Private Message? Private Massage? Poodle Market? Way too often, we see commenters leaving almost nothing but a mere ‘PM’. We’re not entirely sure how it works, but we’re guessing that they’re expecting the poor Facebook administrator to reach out to them. Each 395,702 one of them. (P/S: Hey guys, how about saying “please” and “thank you”?)

10. The one who always asks for the price… even if it’s already stated there Are captions absolutely unnecessary? I mean, do they go into stealth mode on the screens of assuming buyers? C’mon, people. READ THE CAPTION.

NAH, BACA:
5 significant investments and deals made by Khazanah under Azman Mokhtar

If we could add another universal truth to Jane Austen’s books, it would be the fact that the dumbest and most epic of all jokes become immortalised when it goes on the WWW. Whether it’s the KLIA bomoh’s antics or Najib’s kangkung remark, expect people to inject elements of these events no matter how passé they’ve become. Possibly the most high-valued commenter any celebrity or organisation is lucky to have, these special gems will do all it takes to defend their idol with their mighty keyboard powers.

There’s nothing more humiliating than pointing out grammar mistakes made by esteemed names, especially when it’s out in the open. Point to note: it’s human error and these things happen, so be kind!

14. The grammar Nazi with grammar mistakes Oy vey… We wonder how it feels like to be betrayed by your own clicketty fingers and high standards. Most often, these commenters feel the need to use more than one exclamation mark ‘cause wrong grammer are there number one pet peeve and it must be stop no matter the cost. (BTW, we believe it should be ‘one of the most stylish’.)

15. THE ONE WHO MUST TYPE IN CAPS LOCK IT’S ALMOST LIKE WE’RE READING KANYE WEST’S TWEETS. For real, doe. It’s like you’re either shouting or being completely 1990’s robot-like… we simply can’t tell. (Props to Yahoo! Malaysia for that awesome comeback.)

16. The one who always goes off-topic It’s pretty fun to see how people go completely off-topic, almost ignoring the main idea of the original post. Sometimes it’s funny; other times we’re almost sure it would be plain rude.

17. The one who thinks that everything must be of his specific interest… Many news sites have been bombarded for featuring stories deemed ‘not newsy at all’. What people fail to realise are these key points: (1) news sites can only highlight a handful of stories on Facebook – it doesn’t mean that they have nothing else to report (2) readers who want more news can always go to the news’ website (3) just because it isn’t news to them, it doesn’t mean it’s not news to another person.

18. …. and the one who sounds him for being annoying

19. The one who only answers with images

Sometimes they’re memes, sometimes they’re photo quotes. Other times, they’re just epic facial expressions. Either way, we love that these commenters take the time (and bandwidth) to upload a photo in place of text. Definitely one we’ll never miss in a sea of comments. These watchful coyotes are fast and sharp, making sure they take advantage of high-traffic postings by adding a copy-and-paste comment to promote their business. The biggest champions are those who post on their competitor’s page! 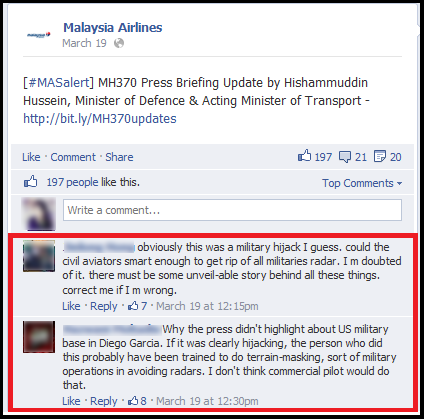 Of course, we saved the best for the last. The recent MH370 tragedy has shown the nation (and the world) just how creative any Tom, Dick and Harry can be. Non-certified aviation experts and detectives with Masters in TV Thriller & SciFi sprung like mushrooms, showing us just how heavily disoriented we’ve become. Take a chill pill, guys. Let the real experts talk!