If you’ve been following our former Prime Minister, Najib Razak on Facebook, you may have seen this post:

In the Facebook post, Najib claimed that a comic called “Belt & Road Initiative For Win-Winism” has been distributed to 2,500 schools – both secondary national and vernacular schools. He also alleged that the content of the comic is #agendaDAP and that it is a propaganda comic written by a former DAP member, Dr Hew Kuan Yew (known as Superman Hew by his supporters because he always wears a Superman t-shirt).

But Howard Lee of DAP Youth later clarified that DAP does NOT have anything to do with the publication of the comic.

So what’s the problem with a comic being distributed in schools anyway? One of the main issues was how the comic portrays the Uighurs in China, who are Muslim, and their supporters as radicals.

The comic would later go on about the inclination of Malay Muslim youths towards political developments in Islamic nations and the Middle-East, as opposed to Communism. It also highlights the Merdeka Centre’s finding in 2018 that the number of supporters of Jemaah Islamiah terror group is the highest among Malaysian Muslims as compared to other neighbouring countries. But how did Hew get involved in a hew-ge controversy like this anyway? As it turns out…

The Belt and Road Initiative (BRI) for Win Winism comic was written by Hew and and illustrated by a local artist, Ching Po Ling aka Tomato. And it was apparently published by the Penang-based Asia Comics and Cultural Museum (ACCM) – where Hew is the curator – in April 2019. The museum is also said to have financial support from the Penang govt.

Hew claimed that purpose of writing the comic was only to educate students on the BRI and that it is not a DAP or communist propaganda as claimed by Najib. “This is for the students to know more about the mega-policy of BRI, from theory to practice.” – Hew told Malaysiakini.

But besides the three controversial pages where the comic discusses the Uighurs and Malaysian Muslim’s support towards terrorist groups that we mentioned earlier, there is also the issue of distributing the comic without the approval of the Education Ministry.

Well, then what about that photo of the Deputy Education Minister, Teo Nie Ching and Hew with his comic that went viral? Teo and Hew with the comic. Img from Najib Razak’s Facebook

Najib questioned the Education Ministry if it secretly approved the distribution of the comic based on that photo but the ministry has denied doing so. The ministry even told the state education departments and district education offices to ensure all schools do not accept or distribute the comic from any suppliers.

But besides Teo, there’s also another photo that went viral: Dr Mahathir and Xi Jinping with the comic. Basically, there’s a page in the comic book that wrote that the Prime Minister gifted the comic to China President Xi Jinping at the BRI meeting in April. Alleged images of Xi Jinping getting his own personal copy.

However, the Prime Minister’s Office has also denied that Dr Mahathir was involved in the publication or that the comic was an official gift to the China President.

PAS, on the other hand, also waded itself into the controversy by asking that Finance Minister Lim Guan Eng to be investigated for writing foreword in the comic. In researching this, it turns out that it’s not even the first time Guan Eng was in a Hew comic; two years back, Hew wrote another comic about Lim’s struggle to be a minister in the Malaysian political context. When the China-comic-controversy became viral, fellow DAP member Mahdzir Ibrahim urged the Penang govt to reconsider all types of assistance provided to ACCM. Mahdzir said that by cutting funding to ACCM, it’s a way for DAP to distance itself from the controversial comic.

However, this isn’t the first time Hew did anything controversial. Watch any of his ceramahs and you’d find all sorts of “French” that you’re gonna have to pardon. But that’s far from the only drama surrounding the former DAP man: 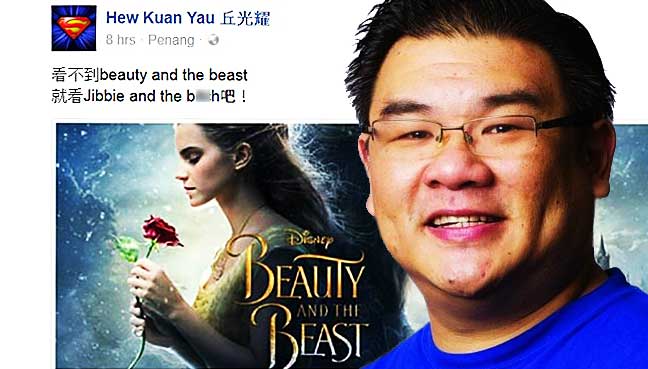 If ugaiz remember, the movie Beauty and the Beast was released back in 2017. While the movie created a huge hoo-haa because of an apparent gay scene, Hew kinda took the opportunity of the movie release to make a controversial remark.

In his Facebook post, he uploaded a poster of the movie together with a photo of Najib and Rosmah with the caption, ‘“看不到beauty and the beast, 就看Jibbie and the bitch吧!” And because of this, he was arrested by the police for further investigations but was released three days later on a police bail.

But the arrest didn’t quite stop him from making controversial remarks such as likening Malaysian leaders to chickens and even… horses!?

Back in 2016, Hew made a video claiming that Lim Kit Siang was using Mahathir to oust Najib and it went viral. In that video, he used the term ‘qi ma sa ji’ (err sorry we dunno the pinyin for this #banana) which meant ‘ride a horse to kill a chicken’. Chup, who’s the horse and who’s the chicken?

“We use Mahathir to slay the chicken. We (DAP) save Mahathir and we are using him as a tool to defeat Datuk Seri Najib Tun Razak.” – Hew, taken from The Star. “Are you seriously using me, Kit?” Img from Cempedak Cheese

Sometime before the 14th General Elections, Hew made yet another remark in his speech about Mahathir’s decision to join the opposition coalition at that time. This time, Hew kinda created an analogy to convince some parties who disagreed with Mahathir’s decision.

“Hadi PAS went to the other side, Mahathir UMNO came. If Mahathir didn’t come here (DAP), Hadi would go there, (then) this GE we don’t have to contest, for sure we’ll be oppositions too. But because UMNO has split up, and a horse (Mahathir) comes, this time we have a horse.” – Hew’s speech from Gerak Perak’s Youtube video, translated from BM. Not exactly a horse but yee-haw. Img from gishella hilmiansyah’s Pinterest

He also added that Lim Kit Siang can only bring the Chinese tsunami but Mahathir is capable to bring the Malay tsunami to beat BN. But besides a horse, Hew had also likened Mahathir to a keris that can be used to eliminate UMNO.

2. Hew left DAP because he made a pro-China remark

Apparently, the BRI comic isn’t the only thing that seemed pro-China. Back in 2016, he wrote on Facebook that China owns the South China Sea.

“The South China sea is China’s! Don’t oppose China because you are anti-communist!” – Excerpt from NST. 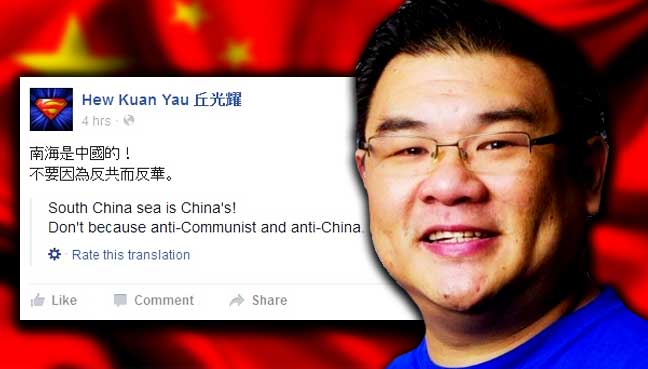 Just in case ugaiz forgot, this happened around the same time the International Tribunal in the Hague renounced Beijing’s claims over the South China Sea. This is because China’s claims over the South China Sea were reportedly violating the United Nations Convention on the Law of the Sea, an international agreement that specifies the rights of states over the oceans. Apparently, 166 countries signed this agreement including… China.

Long story short tho, Hew wasn’t satisfied with the ruling, so he decided to rant about it on Facebook, pretty much sparked an outrage among Malaysians. He was deemed unpatriotic since Malaysia is one of the claimants to parts of the South China Sea.

After all the backlash he received from netizens, Hew decided to leave DAP to protect the party. He had also apologised and retracted his remarks after he was elected as the CEO of the Malaysia China Business Council earlier in 2019.

3. Hew boycotted McDonald’s because of… a HALAL cake policy!? It all started with this sign. Img from Mkini

Now this is probably not a ‘Buy KFC First’ campaign. It all began in 2016 (again) when McD implemented a policy to allow only halal-certified cakes into its premises. This was reportedly in line with McD’s efforts to fulfill the requirements of the halal certification.

For context, the fast food chain had been struggling with halal status for a while back then. To make matters worse, there was even fake news regarding McD’s halal status doing the rounds online.

So when McD implemented the halal-certified cake policy, Hew took his dissatisfaction to Facebook by starting a boycott against McD.

Wah, the Muslims were reportedly already boycotting McD because of alleged links to Israel then and now this?? This was probably how McD dealt with all those crisis. Unedited image from Fortune

In Hew’s defence, he claimed that it was because Malaysia practices freedom of religion and yet McD’s policy showed that (to him anyway) we weren’t able to be tolerant.

But going back to his latest #HewmongousControversy…

Aside from all those controversies we listed out, Hew is generally known for making racially-charged remarks on top of his expletive-laden ceramahs. So it may not come as a surprise to some of the more politically inclined readers when he wrote, published and distributed the BRI comic in schools. PHew! Img from The Star

At the time of writing, the authorities are investigating Hew’s comic. The police have taken the statement from the comic artist and Hew besides getting historians to check the facts in the comic.

Meanwhile, the Home Affairs Ministry has gone one step further by banning the comic. This ban reportedly includes all versions of the comic – English, BM and Chinese versions. In addition, the comic is also banned from distribution at the Education Ministry level because it may have violated the Education Act 1996.

Even his former party have seemingly turned their back on Superman. While there were 43 DAP leaders who defended Hew, most DAP leaders have taken a stand to gather their signatures as part of a petition to condemn the distribution of the controversial BRI comic. According to them, the comic has a foreign propaganda and is unsuitable to be published in schools.

As for Hew? Well on top of his comic now being banned as well as some time going in and out of the balai for the time being, it seems as tho his Facebook page has also been deactivated following the debacle. Hew has seemingly so far been cooperating with the PDRM, but until the cops announce a decision, we’ll have to wait and see before we know the fate of Superman.