During Hari Sukan, the non-participating students (read, the lazy ones) seated far away from the sun in the stadium would have their eyes glued to the athletes on the racetrack, screaming in moral support for their rumah’s representatives, and laughing when somebody drops the baton. Everyone would already know who’s gonna win because this guy or girl is like the fastest in the school and every year sure take home the gold medal.. it’s only a matter of whether they can beat their own record from last year onot.

As far as records go, Usain Bolt is the one to top, the record holder for both 100- (9.58s) and 200-metre (19.19s) sprints – an athlete so fast that Celcom signed him to promote their lightning fast, nonstop internet. Got time to flash the camera a grin summore! Image from HuffPost

But did you know Malaysia has its very own incredible men of speed? The fastest man IN ASIA is a Malaysian! Here are 4 Malaysian athletes who could give The Flash a run for his money (haha just punning).

1. The Perak doctor who became the fastest man in Asia

Then in 1966, the Perak native was among the local athletes who succeeded going to the Commonwealth Games in Jamaica. Though he qualified for the semi-finals of 100m and 200m in personal best times, he didn’t make it to the finals. That same year the Asian Games were held in Bangkok, where Jegathesan become the only runner from Malaysia to win gold medals in three events (100m, 200m and 4 x 100m relay). It was this victory that made him known as the fastest athlete in Asia. He clocked 10.38s for the 100m. Jegathesan was known was the fastest man in Asia in the 60s. Image from The Straits Times

More amazingly he qualified for the games of all games, the Olympics… THREE TIMES – Rome (1960), Tokyo (1964) and Mexico (1968). In Mexico, he went as far as the 200m sprint semi-finals with a time of 20.92s, making him the national record holder until Khairul Hafiz Jantan came along and broke his record (but more on Khairul later). Nevertheless Jegathesan has been the only one to reach semi-finals in Olympics. His feats earned him the nickname ‘Flying Doctor’!

Sports achievements aside, Jegathesan has made strides in the medical world too. He received the Anugerah Sains Negara in 1995 for discovering a new bacteria which he named Bacillus Thuringiensis Sorovar Jegathesan.

Dayum, they fast too. Image from Giphy

For nearly 30 years, the Flying Doctor’s record remained unchallenged until…

2. The Flying Dayak who was 0.07 seconds faster than the Flying Doctor

In 1995, a Sarawakian Iban finally broke Dr. Jegathesan’s 29-year national record of 10.38s in the 100m category. His name is Watson Nyambek. Watson was 20 years old at the time and was competing in the Sukma Games in Kuantan when he clocked 10.31s… making him 0.07s faster than the doctor!

Watson’s greatest achievement on Asian level is winning the silver medal at the 1998 Asian Athletics Championships in Japan by clocking an amazing 10.42s in the 100m sprint. He beat many Asian champion athletes, by then the numbers of Asian champs were growing. He has also competed in the Commonwealth in 1998. But he also proved himself when he qualified to participate in the Olympics twice in Atlanta (1996) and Sydney (2000). Watson has been nicknamed The Flying Dayak for his awesomeness. After retiring from competitions at 29, he has been appointed coach by the Sarawak State Sports Council. Additionally, he founded The Flying Dayak Club for sprinters. It has 30 members now, whom Watson is training to be the best.

Sadly, Watson went through much hardship after where he was reportedly declared bankrupt after being unable to settle his debts. Actually he had taken a loan to pay for treatment for his dad, who had ear cancer (his dad passed away 3 years ago). Thankfully the Sarawak government paid the RM80,000 owed which enabled him to be lifted from bankruptcy status. 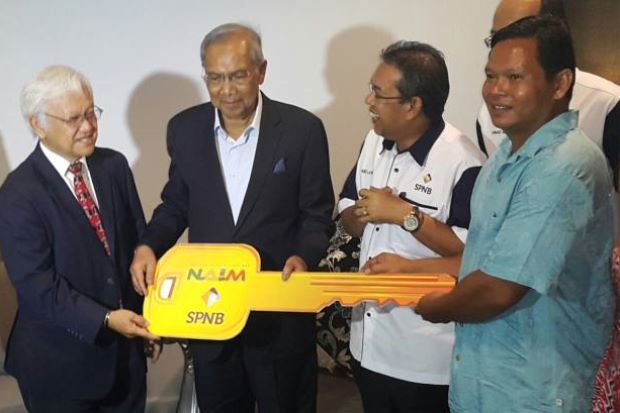 They also gave him a giant key… kidding, they gave him a house. Watson is standing on the right. Image from The Star

Like the Flying Doctor, the Flying Dayak managed to hold on to his record for a darn long time before…

Our sports arena was shaken up once more when Southeast Asian Sprint King Nazmizan Muhammad won two gold medals at the SEA Games in Hanoi in 2003, for the 100m and 200m categories respectively. It ended a 36-year medal-less drought in Malaysia 🙁 But initially this Terengganu sprinter was not the main choice to participate in the event because he failed to make the qualifying round, however after appealing, he was chosen to participate. And a good thing too!

His victory at the SEA Games gave him an opportunity to join the 2004 Olympics in Athens in the 200m sprint. Although he clocked better time at the Hanoi SEA Games (21.05s) than the Olympics (21.24s), he got the chance to run with Asafa Powell, the world record holder before Usain Bolt. 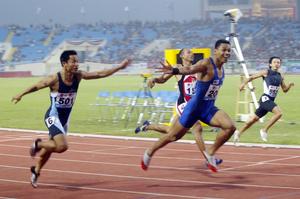 Oh yeah, Nazmizan did the grin before Usain Bolt. Image from pgoh13.com

This Dungun sprinter had also trained at a club owned by former world sprint legend Michael Johnson from the US. But a leg injury prevented him from fame and glory at the Manila SEA Games in 2005.

After leaving the life of sports, Nazmizan worked as a lecturer at Universiti Malaysia Perlis (UniMAP). Though he retired from the limelight, his name was back on everyone’s lips after his mentee and cousin Mohd Izzuddin Yahaya was crowned Juara Olahraga Kebangsaan.

When you’re a coach. From Giphy

BUUUT there is a newcomer who has BEATEN ALL OF THE 3 top sprinters records… who is heee?

Just as things looked like they were slowing down, something happened at the Sukma Games in Sarawak last year. Malaccan 18-year-old Khairul Hafiz Jantan who entered the 100m sprint clocked in… are you ready for this? 10.18s!! So he beat everyone’s record in this category, from Dr. Jegathesan’s 10.38s and Watson’s 10.31s, Whoaa. It’s the best record Malaysia has seen since Watson Nyambek’s time 18 years ago.

The day after that, Khairul finished the 200m sprint in 21.14s, also beating Dr. Jegathesan’s 21.30s, but slower than Naziman’s 21.05s in the semi-finals. But wait, there’s more, the teen later hit a new Sukma record by clocking 21.03s in the finals, earning a gold medal aaand basically beating the Flying Doctor and Naziman’s records. As if that’s not brilliant enough, the young sprinter even topped that with a personal best of 20.90s in Malaysian Open Athletics Championships this year. He must be made of wind matter. Image from The Star

So what’s next for the newly crowned champ? Khairul has set his sights on winning 3 gold medals at the upcoming SEA Games to be held in KL. If he accomplishes this, he’ll be the youngest athlete (18 years old) to win gold medals in the 100m, 200m & 4×100m categories. But of course, his biggest wish is to qualify for the 2020 Tokyo Olympics!

Like the others, Khairul too has been given a nickname, The Speedy Jantan.

You don’t need to be Jamaican to be a winner. Be Malaysian can already

Historically, Jamaica has produced tons of sprint kings and queens like Marlene Ottey, Asafa Powell, Veronica Campbell Brown, Elaine Thompson and the one and only Usain Bolt, so much so that it has been called the ‘sprint factory’. 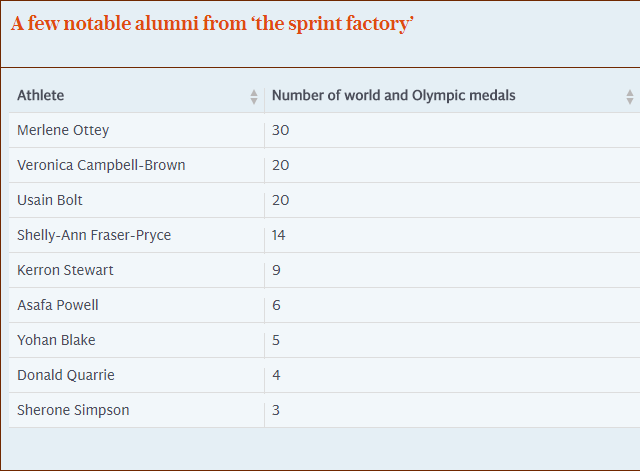 Check them number of medals. Can decorate a Christmas tree in KLCC. Image from The Telegraph

Eh actually why ar? It’s the air or water or what? The answer is real simple – they treat sprinting like Malaysia treats badminton or the US treats football. We’re talking big time coverage and events where the whole nation watches the biggest event of the year, the ‘Champs’, like how we would tune in to Lee Chong Wei’s match. So you could say the country really invests in this sport.

And since Malaysia is a country that’s more invested in badminton, we’ve produced badminton aces like Chong Wei, the Sidek bros, Goh V Shern, and more. But hey, then along come amazing sportsmen and women in squash, diving, cycling and so on! But we guess at the end of the day, it boils down to not just an athlete’s dedication and hard work, but also a bit of outside help goes a long way.. encouragement from parents, school and government (which the latter already does), in giving them the best facilities, trainers and uh, maybe bowls of Special K?