One blunder after another has been unfolding at the SEA Games. First it was the upside down Indonesian flag – it was printed upside down in souvenir booklets, making it look like Poland’s flag instead. The incident pissed Indonesians off and #ShameonyouMalaysia has been doing its rounds on Twitter. Not only that, putting a flag upside down is a serious desecration. Remember the time metal band Carcass put the Jalur Gemilang upside down on Facebook? Malaysians were fuming at that.

It prompted Indonesian hackers to attack 27 Malaysian websites, making them look like this: Then two bus ferrying Thai, Filipino and Myanmar squash players was involved in an accident, causing the players to have to withdraw!

Then fans who came for the Myanmar-Laos football match claimed they were turned away coz the allocated seats for the Myanmar fan section had been sold out, despite fans claiming there were tons of empty seats. According to allegations on social media, only 500 tickets were made available for Myanmar fans although the stadium has a capacity of 6,000 seats. As a result, they had to watch the match from the outside.

Then there was another flag incident when the Bruneian armed forces flag was displayed on the digital scoreboard for synchronised swimming instead of the flag of Brunei.

It’s been terrible for us so far, but it certainly won’t be the last because boo boos in big sporting events are actually quite common – yep, even the Olympics! Here are 9 other embarrassing blunders.

1. Some doves got roasted by the Olympics torch in Seoul

The 1988 Olympics in Seoul started off without a hitch as South Korea’s President officially opened the Games. The Olympic flag was raised and the hymn was played, and they released hundreds of doves as a symbol of peace. That’s when it all went downhill (or should we say up…IN FLAMES). All eyes were on the former athletes as they completed the torch relay and prepared to ignite the Olympic Cauldron – it’s tradition! As soon as the torches touched the cauldron, it ignited, along with the poor doves that perched there. To be fair, the releasing of doves is also an Olympic tradition, so it wasn’t South Korea’s idea. The modern dove-release tradition became an official part of the opening ceremony for the first time in 1920. But since the 1988 incident, doves have been barred from being used in the ceremonies. 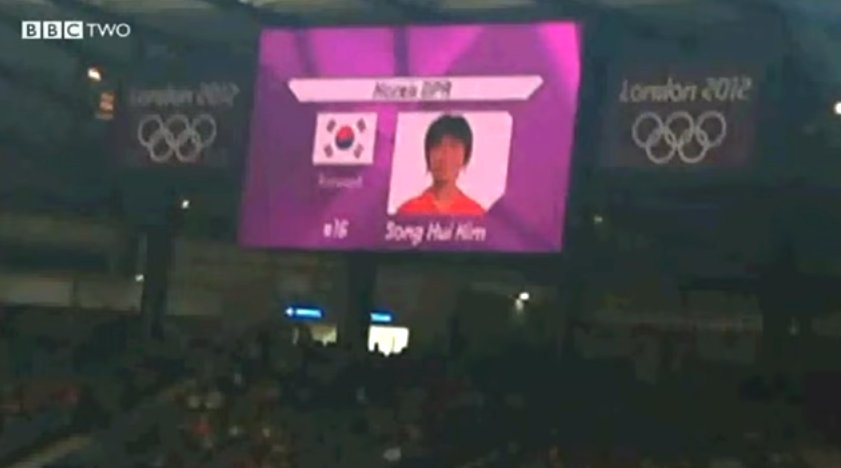 The North Korean football team stormed off the field in protest for more than an hour. Image from Business Insider

North Korea and Colombia were about to play against each other in the women’s football match at the London 2012 Olympics, when the North Korean team stormed off the field in protest for more than an hour. What happened was the London Organising Committee of the Olympics Games (Locog) accidentally used the SOUTH Korean flag instead of the North, yikes! And these two countries are bitter enemies summore.

Whether it’s upside down or the wrong country entirely, clearly flags are a very sensitive issue for a lot of people. But the committee apologised to the North Korean players and said it really down to human error, not any kind of malice.

When Kazakhstani Mariya Dmitriyenko won a gold medal at the 10th Arab Shooting Championship in Kuwait, she stood on the podium with other medallists, expecting to hear her country’s national anthem. Instead, the parody national anthem from the movie Borat played! You’d think the lyrics “Kazakhstan’s prostitutes cleanest in the region” would have raised alarm bells, but no. (P/S: we used the video above because it has subtitles)

It’s majorly malu enough to mistakenly play the wrong song, on top of that the movie itself is offensive to Kazakhstanis and is banned in their country. Turns out the organisers found the ‘anthem’ online and didn’t realise it’s from the satirical Sacha Baron Cohen film. The team asked for an apology and later the medal ceremony was rerun. You’d have to hand it to Mariya though, she was a real sport 😉 for standing through the entire song, an amused look on her face and hand to her heart.

4. China’s cute little singer turned out to be not the singer 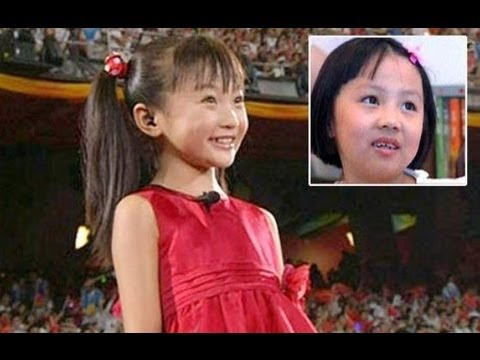 Lin Miaoke was not the real singer…Yang Peiyi (inset) was. Image from NTDTV on YouTube

We’re sure some of you will remember this huge controversy that happened at the 2008 Beijing Olympics. They gave the most epic opening ceremony that was talked about for a long time afterward – amazing fireworks display and adorable 9-year-old Lin Miaoke wowing everyone by singing Ode to the Motherland, a famous patriotic song of the PRC….. except she wasn’t the one singing. The real singer was 7 1/2-year-old Yang Peiyi. So Miaoke was only lip-syncing the whole time!

NAH, BACA:
Apam balik is one of Malaysia's favourite snacks... but where did it come from?

They revealed they liked Peiyi’s voice but preferred to put Miaoke on stage because Peiyi had uneven teeth. “This is in the national interest. It is the image of our national music, national culture. Especially the entrance of our national flag; this is an extremely important, extremely serious matter,” explained the event’s general music designer Chen Qigang.

5. Singer forgot her cue to sing the British national anthem at the 2016 FA Cup finals

Even Jeremy Corbyn sings the National Anthem better than this pic.twitter.com/7rIIv4Xju3

In 2016, former X-Factor contestant Karen Harding was supposed to sing the British national anthem for Manchester United’s FA Cup final against Crystal Palace. 80,000 fans at Wembley prepared to listen to the singer belt out God Save the Queen, but she missed her cue to start. So as the crowd began singing the first verse, she could only smile and fiddle with her earpiece. She started singing midway through the second verse. Awkward.

OMG. Biggest audience of my life and I get technical difficulties! Argh so sorry Guys!!! Xx — Karen Harding (@KarenHarding) May 21, 2016

6. One of the five Olympic Rings refused to light up in Russia There have always been five Olympic rings, not four. At the Sochi Winter Olympics 2014 however, when five giant snowflakes were supposed to open out into the Olympic rings, only four did. The accompanying fireworks display had to be cancelled too. Those who were watching it at home in Russia though were none the wiser because state TV quickly cut away from the live ceremony to broadcast the recorded rehearsal. Only those who were actually there could see what happened live.

Still, the Creative Director Konstantin Ernst handled it very calmly: “This is certainly bad, but it does not humiliate us,” he said. Kasi you satu medal.

7. The Commonwealth Games Baton with the Queen’s message refused to open

One does not simply make the Queen wait. But at the 2014 Commonwealth Games opening ceremony in Scotland, the Queen had to wait for all of 30 seconds while Commonwealth Games Federation President Tunku Imran (second son of the late Tuanku Jaafar, elected monarch of Negeri Sembilan) struggled to open the baton that contained the message the monarch had placed inside.

At one point, Sir Chris Hoy, the most successful Olympic male cyclist of all time, offered help and they both tried to open it together. Throughout the trial, the crowd was still cheering. Thankfully Tunku Imran managed to open it in the end, whewww.

8. Chairman of the Commonwealth Games called Camilla ‘Princess Diana’ (it was 2010 and Princess Di had passed away in 1997)

Charles and Camilla in India for the Commonwealth. Image from express.co.uk

We’ve seen some pretty awful blunders so far, but this one is plain cringeworthy. At the 2010 Commonwealth Games which India fought hard to have the honour of hosting, so many mistakes went down. For one thing, they didn’t have enough spectators, so there were a lot of empty seats, and then their pool was cloudy so the swimmers couldn’t really see much under water.

But the mother of all horrors came when the head of the Delhi Commonwealth Games Suresh Kalmadi announced Prince Charles was being accompanied to India by Princess Diana!! He told a press conference: “Yes, Princess Diana was there”…then corrected himself and added, “Prince Charles and the Duchess of Cornwall”. Oy. The flawed flags that were used. Image from USA Today Sports on Daily Mail

If it’s one thing we learned, it’s DO NOT get your flags wrong. At the Rio Olympics, the mistake on China’s flag would be considered subtle for most people, but not to the eagle-eyed Chinese journalists who noticed that the four little stars on the flags were not pointing towards the big star. Instead, they were lined paralleled to each other. The four small stars are supposed to be pointing toward the big star. Image from Daily Mail

China Central Television Station (CCTV), the country’s central broadcasting organisation, explained on its Facebook page: “The larger yellow star represents the Communist Party of China, and the four smaller stars symbolise the solidarity of Chinese people of all social classes and ethnic groups under the leadership of the CPC.” The Rio Olympic committee had apologised to the Chinese authority.

Wah! Ok la, so it’s not just us… BUT that doesn’t mean we should let it happen again

The SEA Games cock-ups have been pretty bad so far, but thankfully the organising committee hasn’t been taichi-ing the responsibility. They were quick to apologise and tried to make amends by reprinting new souvenir booklets with the Indonesian flag facing the right way up for example.

We understand that organising an event of this size can be daunting. What’s done is done, but from now on we should prevent the same blunders from happening again. Check, check and check again, conduct rehearsals, and so on. Maybe next time check with dignitaries of other nations on the details, like the flag. And make sure that bus drivers carrying the athletes have a proper licence and don’t have a theft record.

But on our part, maybe don’t add to the embarrassment and piss off our neighbors even more? (Like calling Singaporeans anjing? Aiyo… why la…)