On a sunny day on 7th August, they had the Standard Chartered KL Marathon (SCKLM). It’s one of the biggest and most popular marathon in Malaysia! If you haven’t tried before, go try la, they’ve got categories ranging from easy to #omgyougilakah (5km, 10km, 21.1km, and 42.2km).

HOLD ON before you grab a registration form and your running buddies, it’s important to know how to prepare for a marathon. Practice and workouts, yeah, that’s part of it, but did you also know you must eat the right food before running?

We want you to EAT right (and enjoy it!) before running a marathon

Pretty sure that’s not right… Image from menshealth.com

And because we at CILISOS don’t really like eating healthy food, we thought… hmm… can Malaysian food possibly good for a marathon? Nasi lemak? Roti canai? Char kuey teow? Together with Standard Chartered Bank, we asked an expert, Juliana Loh, Dietitian at ParkCity Medical Centre.

BUTTT before we start the list, the food Juliana has suggested is more suitable on the day of the marathon, specifically 2 to 4 hours before running:

“If the meal is consumed longer than 4 hours before the event, then the person may become hungry. Foods eaten less than 2 hours before exercise may not have time to be digested and absorbed. This can dampen the performance. Heavier meals would be okay if it’s 4 hours before, whilst lighter snacks can be 2 to 4 hours before.” – Juliana told CILISOS

Yes laaa, we know that you may have different opinions of what’s the best way to eat before running a marathon, but this is just a list to show you there are some local food you don’t have to miss out on in the process. HOWEVER, take note that some of these suggestions have been modified by Juliana because it’s not so suitable to eat it in its original form (you’ll see what we mean later…).

Okok without wasting any more time, here are the 5 best Malaysian foods to treat yourself to before running a marathon…

WHY: High in easily-digestible carbohydrates + Low to moderate amount of protein + Low fiber 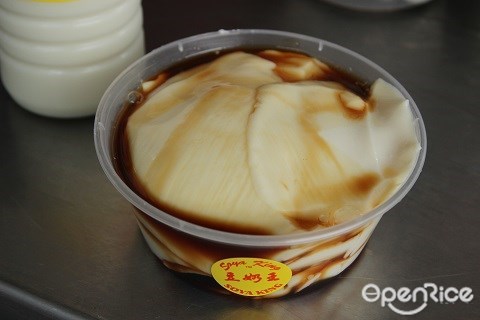 YASSS! This sweet dish can easily be found anywhere and it’s hassle-free to prepare. Just tapau from a roadside van, stand there and makan, then you’re good to go. In fact, Juliana says you don’t have to modify it, meaning you can eat it with the gula melaka syrup without feeling guilty. So here’s a list of tau foo fa places in KL you might pass by along the marathon route. Kim Soya Bean at Petaling Street should be near the marathon route. Image from my.openrice.com

“Small amount of fats and protein is fine. High fat and protein food take longer to digest and may cause tummy upset during the run, same goes for high fiber foods as well. Spicy, gas-producing should be avoided.” – Juliana

Yes, that means NO sambal petai! Sorry petai lovers but surely y’all want to run with your legs, not be propelled forward by gas. OMG pity the last row runners la.

Delicious as tau foo fa is, Juliana recommends that individuals with Type 2 Diabetes, and high uric acid or gout might want to avoid it.

WHY: Made of rice flour that is easily broken down + Low fiber Yep, putu mayam is another carbo dish. The suggestions Juliana has given primarily consist of high carbs, so don’t be too shocked as we go down the list. Those of you who’re marathon experts and know your stuff will agree that runners need to load up on carbs before a marathon because it is a great source of energy, so you can last longer.

“Control your portion of the grated coconut as it is a source of fat and may cause an upset tummy during the run. Timing of meal plays an important role.” – Juliana

Then what’s the safest time to eat putu mayam? Better make it 4 hours before the marathon, advised Juliana. Wouldn’t want to run around looking for a toilet rather than the finish line. But, people who have Type 2 Diabetes or heart disease should minimize their intake of the grated coconut.

NAH, BACA:
How the founder of Maybank allegedly cheated BILLIONS from the Sultan of Brunei We know this one is gonna get people excited and now you’ve even got a good excuse to binge on it! BUT chup… Juliana told us that you shouldn’t eat the ais kacang like normal. This one needs a bit of modification if you wanna eat it before a marathon:

“Avoid the corn and beans. They may cause an upset tummy.” – Juliana

On top of that, you should reduce the amount of evaporated milk too. Corn is great for cleaning out your colon, plus it has good nutrients – potassium, magnesium, and vitamin C – but not before a marathon la, guys. It will make you feel the urge to pangsai. Beans as well. Unless you want an excuse to stop halfway without losing face, then a berak break is the excuse for you. By all means… boss, kasi tambah jagung and kacang!

Similarly, people who have diabetes should avoid eating ais kacang.

WHY: Good source of carbs If you’re wondering why we suggested soup and dry style, that’s because it’s BLAND. So it’ll minimize irritation or chances of getting stomachache, and besides, it warms the tum tum! ? Order clear soups instead of curry-based or spicy ones, like laksa, curry mee, char koay teow, etc.

Since this meal is somewhat heavier than the others we’ve suggested, it’s better to be taken 4 hours before the marathon.

However, Juliana recommends that those with heart disease might want to go easy on the oil and restrict dipping the soy sauce chili. And those with hypertension (high blood pressure) may want to opt for the clear soup instead of dry ones which is tossed with soya sauce. Soya sauce is high in sodium, which makes your kidneys hold on to more water. Extra stored water will raise the blood pressure.

“Minimizing the vegetables would be advised – then again, it’s almost always one or two measly strand of vege in the soup, which is negligible.” – Juliana

WHY: Good source of complex carb Omgyay, perfect for breakfast on that day! Tunggu ya, this one also need to modify sikit…

“Easy on the margarine, with a thin spread of kaya. This would be fine for the general population.” – Juliana

She also suggests opting for white bread rather than other types. The ones like wholemeal bread are fibrous, which means… you know la… berak break.

And then Juliana dropped another bomb… cannot eat with soft boiled eggs on the side because it takes a longer time to digest. WUUUUT??? NO! That’s like Batman without Robin, like Jackie Chan without Chris Tucker. Don’t flip a table coz it’s only for a short while, ugaiz. Days before that, you can still eat soft boiled eggs with your roti bakar… We know some of you would have your own food regimen and knowledge on the correct way to eat before a marathon. Besides, there’s Google for all that, too! But hopefully this list will give you some ideas of how you don’t have to stop eating your delicious Malaysian favourites and feel sad.

As Juliana already explained, these five food suggestions would be good for around 2 to 4 hours before the marathon. On other days, you might not want to eat some of these dishes too often coz high carbs wei!

“Days to weeks prior to the marathon, despite the fact that you’ll be burning lots of calories during the marathon, there are no cheat foods to indulge in, as unhealthy food choices and unnecessary weight gain will only affect your performance. Any ‘reward’ you want to give yourself will have to wait post marathon.” – Juliana

So at the end of the day, just makan in moderation lor. And ok, the Standard Chartered KL Marathon just habis, but don’t forget to always eat a healthy, balanced diet and have sufficient rest to compensate your training. If you’re participating next year, remember these 5 awesome Malaysian dishes that you can still treat yourself to right before the marathon. 😉