Unless you’ve been living under a sesame seed bun, there has been an ongoing boycott against several “Israeli – linked” companies over the past few weeks in response to the recent escalation in the Israel – Gaza conflict with McDonald’s bearing the brunt of it, even eliciting an appeal from the Managing Director of McDonald’s Malaysia to end the boycott. Protesters have also set their sights on Starbucks, and a local minister has publicly cut up his HSBC cards and closed his account.

In case you’re wondering, the word boycott comes from Charles Boycott, a land agent in Ireland who was subject to a whole lot of Ire over…. land. Yeah, we just wanted to make that pun. You can read the rest of it on Wikipedia.

Back to the current boycott, with opinions and reports from both sides of the picket sign, we feel that we shouldn’t be adding more fuel to the fire (Cilisos to the burger?) but rather take a look back at other boycotts that Malaysians have staged or suggested over the years.

We are going to compare and rate the five most recent ones based on their ridiculousness and impact using, well, boy cots…….. boy cots. Universal fact: Blue is for boys.

All ratings are out of 10 cots.

In January this year, Datuk Seri Anwar Ibrahim was barred from entering Japan by immigration authorities at Narita airport.

He was in the country at the personal invitation of Nippon Foundation chairman Yohei Sasakawa to present a paper on Muslim democrats. The reason for his being denied entry was an unspecified report, possibly dating from 2013, which Anwar claims to be be the work of “hidden hands” within the government. We also found another report stating that the reason may be due to PAS and PKR’s allegations that the Japanese government had paid Putrajaya RM 207 billion in compensation for the Death Railway during World War 2. 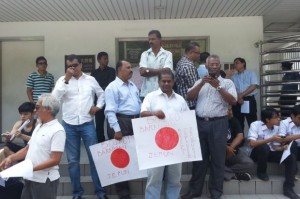 Some people, mostly from PKR’s Youth Wing, weren’t too happy about this and staged a protest outside the Japanese embassy demanding a formal apology. The 30-person group submitted a memorandum to the embassy while calling boycott of Japanese merchandise until an explanation was provided. Some protesters also burned placards printed with the Japanese flag and chanted slogans such as “Boycott Japanese products” and “Reformasi.” PKR Youth denied that the placard-burners were members of the party. 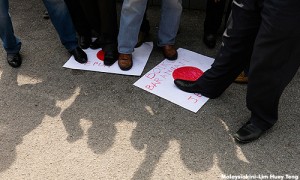 Well, there really wasn’t anything that happened beyond this since Anwar himself gave the waggy finger of disapproval to the youth wing for desecrating the Japanese flag.

Pictured: Not Anwar. Image from collegetimes.com

He had also been reinvited back to Japan on February 26th which, as far as we know, went without a hitch.

A couple of days after the 13th General Election in May last year, Utusan Malaysia published a headline entitled “Apa lagi Cina mahu?” which accused the Chinese community of being ungrateful to the government despite proactive programs and opportunities given to them. 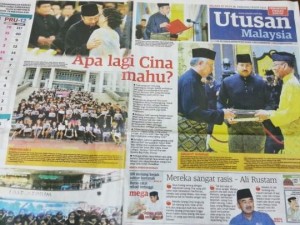 However, this isn’t the boycott you’re expecting. 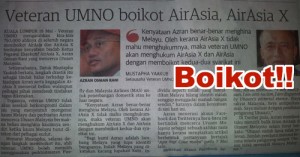 The actual boycott related to the Utusan headline was against Air Asia when Air Asia X’s chief executive chairman Azran Osman Rani described Utusan as “racist.” He also called Perkasa narrow-minded and caused Malays to be left behind.

So as you might guess, there was a call for a boycott against Air Asia by Utusan and Perkasa. This was later joined by the Congress of Unions of Employees in the Public and Civil Services (Cuepacs), the Malaysian Consu…. You know what, we’ll just use their abbreviations from now on… LPKPM, and KEPAK, though these three claim their reasons for joining the boycott were due to numerous complaints from consumers dissatisfied with Air Asia’s service.

Demanding an apology, one of the newspaper’s columnists also suggested that Utusan not run any more advertisements from Air Asia until Azran apologizes.

While Azran has not apologized for his remarks, Air Asia’s executive chairman Datuk Kamarudin Meranun has, and the turbulence in the relationship between the companies involved have since leveled out.

However, we still question the logic of not running ads from Air Asia, since…. won’t that hurt Utusan more, being that ads are revenue?

Also related to the aftermath of the 13th General Election was a call by certain NGOs to boycott Chinese businesses as “punishment” for supporting Pakatan Rakyat.

While most analysts warned against the socio-economic  implications of such a boycott, Domestic Trade and Consumer Affairs minister Datuk Hasan Malek has said that while the federal government did not approve of the boycott, he defended the right of the groups to express their dissatisfaction through a boycott.

The Malaysian Muslim Consumer Association (PPIM), one of the groups supporting the boycott, has clarified that it isn’t a boycott as much as it is a “movement to buy certain products last,” and referred to it as a “Ghandi-styled passive resistance.” 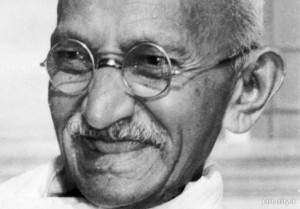 They also clarified that the Ghandi was only for selected companies and products identified as providing support to DAP, singling out Robert Kuok as one of them

“We are very selective … We do not have proof, but we believe that Kuok is supporting the DAP” –  PPIM executive secretary Nadzim Johan.

The Ghandi apparently worked, since several Chinese-owned companies have requested for meetings with the group to talk about the boycott.

Poor Uncle Slocumm (who was a real person, by the way) was involved in a boycott campaign by the Malaysian Chinese because the company is owned by Tan Sri Syed Mokhtar Al-Bukhary, an (alleged) UMNO crony. To clarify, Syed Mokthar owns Bernas which has a 30% stake in Gardenia. There’s also a long story involving the price of bread as well as Syed Mokthar’s involvement in Gardenia which you can read about here.

NAH, BACA:
Sick of Malaysians complaining about the country? This app can help you make a better Malaysia

The call for the Gardenia boycott was mostly spread online via email, social media and text messaging; written mostly in Chinese. 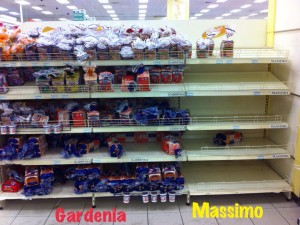 The messages asked consumers to avoid the brand and to buy Massimo bread instead. Massimo is owned by Robert Kuok, who also owns Federal Flour Mill – which Gardenia had been pressured to stop buying flour from.

Gardenia felt the effects of the boycott campaign well enough to publish newspaper ads denying that they’re a crony company, and that all decisions regarding the purchase of flour were based on sound business and economic practices. They also approached Seputeh MP Teresa Kok to clarify the matter, and she too agreed that there was no truth to the claims.

Retaliation for the Gardenia boycott was also one of the reasons given by the PPIM for the boycott of Chinese companies mentioned in #4.

Back in May, pork DNA was found in Cadbury’s Dairy Milk Hazelnut and Dairy Milk Roast Almond products during a random test by the health ministry.  This resulted in a huge outcry since the products were halal-certified by Jakim. We have contacted Jakim before in regards to their certification process, which you can read about here.

When the story broke, Cadbury had recalled the affected products and pledged to work closely with the authorities on the matter. They also maintained their confidence in their product being pork-free, in the press statement downloaded from their Facebook page: 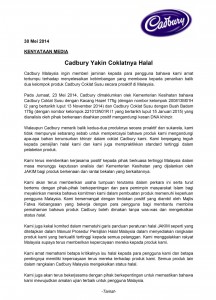 However, certain organizations weren’t happy and wanted to Cad-bury the company alive.

Not wanting to be out-outraged, the Jaringan Melayu Malaysia (JMM) planned to sue Cadbury for an estimated RM 100 million for the “great insult” and sought to close down the factory if possible.

Others also called for a Jihad against Cadbury, with Ustaz Masridzi Sat blaming social ills on Muslims eating non-halal food:

“Because the person eats pork it is difficult to guide him to the right path. When the day of judgment comes, that person will be wearing a pig-face because of what he has eaten.

We need to unite, we must declare jihad.”

Other actions have ranged from rinsing their mouths with soil water to demanding that Cadbury pay for blood transfusions in order to cleanse the blood tainted from consuming the chocolates to burning the factory down.

However, there are also others who have pointed out that there are greater sins to be outraged about other than unknowingly consuming pork (which is not punishable by Allah, by the way).

As for the blood transfusions, well…. let’s just say Islamic teachings might not fully agree with it.

Jakim has since announced that no trace of pork DNA has been found after further testing, and that samples from the earlier test were not straight from the factory and was tested in a non-accredited lab. There are still those who haven’t forgotten (or are trolling), as shown in the above screenshot; and as of June, the Muslim Consumers Association of Malaysia (PPIM) is maintaining its boycott of Kraft products until Jakim and the Health Ministry gets their act together.

Wait, aren’t you going to talk about McDonald’s?

So evidently we’ve had a lot of practice boycotting stuff since this isn’t even an exhaustive list – there have also been boycotts for ASTRO, Petron, the Malaysian Philharmonic Orchestra, Pemanis, and even macaroons. However, we do feel that some of these are justifiable and have excluded them from this list.

However, we might remember a time when we were boycotted against when Chinese nationals cancelled and stopped booking trips to Malaysia in anger over MH370. Some Chinese celebrities such as Zhang Ziyi and Chen Kun also publicly expressed their dissatisfaction of Malaysia’s handling of the situation and shunned Malaysian products and travel destinations. Malaysian artistes were also similarly targeted, with internet users asking demanding that artists such as Fish Leong and Shila Amzah be banned from performing in China. Some also cursed Fish Leong’s unborn child.

Malaysian goods have also been boycotted by Iranian traders over UMNO’s anti-Shia campaign, with Petronas’ oil exploration projects in Iran running into hurdles and commodities such as Malaysian palm oil and rubber being sidelined. The boycott has resulted in millions of Ringgit worth of losses, prompting a government official to seek PAS’s help in restoring ties.

So we ask how it feels like being on the other side of the picket sign, as a citizen of a country being boycotted and vilified when you aren’t responsible for anything other than being a citizen? And when we bring that down to a micro scale, how do you think a McDonald’s employee would feel being harassed for working at McDonald’s or be told that they should “quit their jobs in protest.”

Similarly, how would you feel if you had your car window smashed for displaying a McDonald’s sticker? 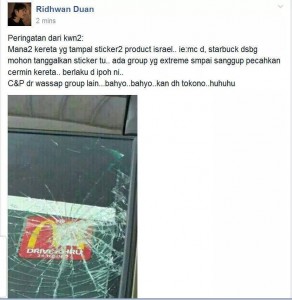 On another note, we noticed that some protesters were wearing Guy Fawkes masks. 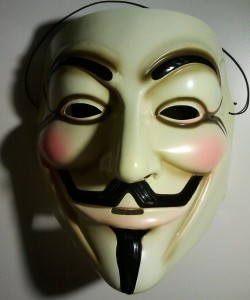 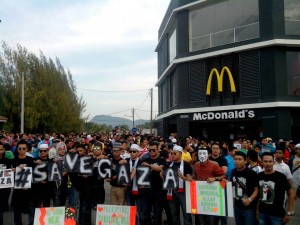 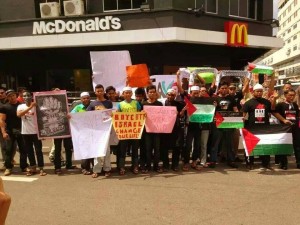 Here’s something interesting: The rights to the imagery of the mask is owned by Warner Brothers, who gets a royalty for every mask sold.

AOL Time Warner has a 3-flag (out of 6) boycott rating on inminds.com, the website used as a source by many supporters of the Israel boycott, for investing over half a billion dollars in Israel over the past 10 years.

So to the mask wearers, it looks like you Fawked up. 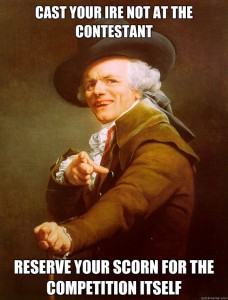