Let’s start off with a fun fact: Did you know Malaysia’s population has way passed the 30 million mark? The 30  millionth cutey baby boy was born around February last year. He’s gonna have such awesome birthdays, man.

Although we don’t think we’ll reach Dr M’s goal of 70 million citizens by 2020, our population has been increasing pretty steadily since 2000. However, something unusual is happening in Malaysia lah:

Our birthrate is goin’ down?! Screen grab from themalaymailonline.com

One big question comes to mind. How is it that even though the overall birthrate in Malaysia is going down for real but the number of people living in the country is growing day by day?

We found out that the population growth has nothing to do with babies at all. It MIGHT be due to the increase of senior citizens and foreign workers in the country. However, we would like to address the birthrate yang semakin rendah according to Datuk Azizah Mohd Dun, the Deputy Minister of Women, Family and Community Development. She stated that the overall fertility rate has dropped from 3.0 in 2000 to 2.1 in 2012.

She also echoed the reasons everyone kinda already knows that are causing the fertility rate to go *thumbs down motion*. More Malaysian men and women are choosing to get married later in life! This report by The Star predicted that the average marrying age for both sexes would increase to 33 by this year. That means more single dudes and single ladies out there yo!

We could watch this all day. GIF taken from giphy.com

However, we’ve recently found out a number of things about fertility issues and making babies in Malaysia that made us go “Oh, I didn’t know that” and “Oh my God, what?” Some of the stuff we discovered were so shocking we had to share them with you. So here we go.

1. There are Malaysian couples dunno how to make babies?! Baby pic of this writer. Sweat face is on!

A local doctor who was working in a government hospital in Klang, who wishes to remain anonymous (let’s call him Dr V), told us that there was a couple who came in for consultation as they couldn’t get pregnant even though they have been trying for some time. It is Dr V’s duty to ask for a detailed description of a couple’s sexytime activities (how frequent they do it, what positions they use, etc.) to figure out what went wrong. After conducting a few scans, he was surprised to find out that they lady’s hymen was still in tact. She also complained it hurt every time she made love to her husband.

We hope ugaiz are smart enough to connect the dots. Here’s a rage comic to help.

We were shocked to say the least. How on earth did they think they could get pregnant that way? Didn’t they ask their family, friends or Google what to do? Is sex education really so teruk in Malaysia? According to June Low, sex educator and CILISOS freelancer, it sadly is. In an email interview with her, she was not surprised to hear about this couple’s situation and said that the lack of sex education leads to people not feeling open or comfortable to asking questions and learning about sex.

As part of her sex ed workshops with students, June has them write questions they have about sex to put in a box. Here is an example (this note was redone to protect the identity of the writer): 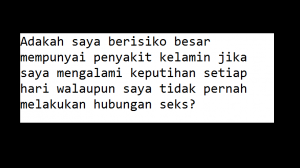 “Is there a high risk of me contracting sexually transmitted diseases if I have genital discharge every day even though I’ve never had sex before?”

This question truly confirms the lack of sex ed in schools. Although there are rare cases of STD (sexually transmitted diseases) contraction through skin to skin contact, youngsters who are not sexually active have a very low risk of getting STDs. Other than that, any sort of discharge is completely normal for girls and boys to experience.

If they already know so little about this, there is no way they would know that…

2. Abortion is actually legal in Malaysia (well, kind of) As stated by June Low, there is a myth going around that abortion is illegal altogether. We would like to debunk that right now. Yes, abortion is legal but it does come with a lot of restrictions. A pregnancy is allowed to be terminated if it’s endangering the woman’s life by affecting her mental or physical health. But the law also states that ONLY the doctor can decide whether a woman should have an abortion.

That means this can happen without the woman’s consent. Messed up, right? Under Section 312 of the Malaysia Penal Code (Act 574), a woman with child and people involved who choose to purposefully miscarry may be punished to up to seven years in prison. FYI, doctors are exempted from this law because they are experienced medical practitioners and whatever decisions they make, including terminating pregnancies, are done in good faith.

Back in March, a Seremban cop caused a bit of a stir when he stated that abortion cases involving unmarried couples is deemed illegal and will be investigated. However, this is NOT TRUE! Married or unmarried, abortion is legal if the pregnancy causes health risks to the mothers involved.

“The law clearly states that termination of pregnancy is permitted in circumstances where there is risk to the life of the pregnant woman or threat of injury to her physical or mental health. In this case, there is no such thing as legal just because the couple is married.” – Datuk Dr S. Jeyaindran, as quoted by The Malay Mail Online.

June also told us that the penal code does not discriminate against pregnant women who are unmarried. ​Unfortunately, the lack of clear information on abortion and abortion laws have caused many women to resort to unsafe methods and abandoning their babies as result of unwanted pregnancies.
(Update: In an earlier version of this article, this writer wrongly assumed that abortion is illegal for unmarried couples based on a quote by a police officer in this article by The Malay Mail Online. This writer would like to apologize if any readers were misled or confused by the information given.)
However, there are also many women that are unable to get pregnant but they are not entirely to blame because…

3. Fertility issues are not 100% caused by women This is one of the biggest myths when it comes to infertility. When a couple is unable to get preggo, the woman always gets blamed first! It is true that there is more pressure on ladies because they are child carriers and suffer from a wider range of infertility issues. However, not many people know that men play an equal role in getting their gal pregnant. In fact, about 1/3 of fertility problems are caused by men! Another 1/3 is caused by women and another 1/3 are unknown.

NAH, BACA:
What's it like being a second wife in Malaysia? 4 sobering realities about Polygamy

A woman can practice the healthiest lifestyle and have rockstar eggs and and amazing uterus and STILL not get pregnant. Why? Because the key to any pregnancy is healthy, athletic sperm. Problems some men might face are low sperm count or their little guys are abnormally shaped or cannot swim properly. Boys, don’t be malu and please get yourself checked if you’re planning on having a baby. Because literally, no sperm, no life. But if you and your lady are good to go, make sure you have plenty of sexytime okay?

If countless sexytime sessions do not work and you’re thinking of pursuing alternative fertility treatments, know that…

4. Only married couples are permitted to go through IVF Couples who have have trouble getting pregnant naturally may resort to IVF (in-vitro fertilization) to increase their chances of having a child. Through IVF, the fertilization process between the sperm and egg takes place outside of a woman’s body. The healthy embryo is then inserted into the woman’s body and in hopes that she will get pregnant.

However, if you don’t have a marriage certificate, an alarm will go off in the fertility center and guards will escort you out (okay lah, we exaggerate). What we’re saying is unmarried couples, cohabitants, same-sex couples and single parents are not allowed to seek IVF treatment according to the reproductive laws in Malaysia. The Sunni Islamic laws in Malaysia are even more rigid when it comes to IVF.

This creates problems for Muslim couples who require sperm and/or egg donors if theirs are not viable.

It gets worse. Malaysian couples also have to deal with the fact that…

5. Surrogacy is illegal in Malaysia 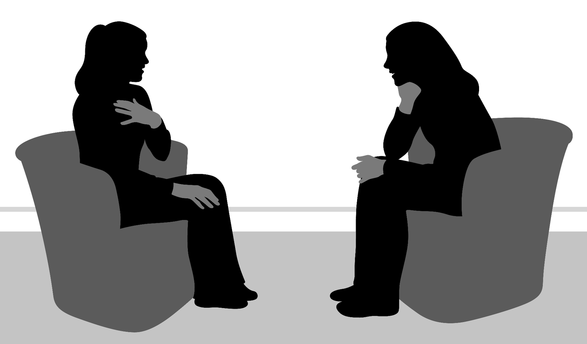 Surrogacy is definitely considered a last resort to have a child of your own flesh and blood. Just don’t do it in Malaysia. The concept of surrogacy is quite complex as there are many types, but basically it means the practice of a couple seeking another woman’s help to carry their child to term. In 2008, The National Council of Islamic Religious Affairs issued the fatwa opposing surrogacy in Malaysia. For Muslim couples, having a baby via surrogacy is akin to having a baby out of wedlock.

On another note, there are no civil laws addressing this issue because surrogacy is unfamiliar territory. However, a little leeway is given to non-Muslim couples if they wish to go through surrogacy. But they have to deal with really complicated consequences if they choose to do so.

It’s safe to say that surrogacy is a controversial topic and not many people know where to start. This recent forum post might give you an idea of how surrogacy is perceived in Malaysia.

This is how we’re feeling right now: 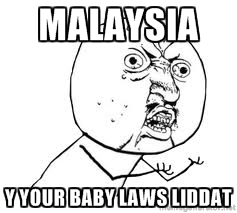 We cannot imagine what it’s like to be unable to have a child. We lagi cannot imagine being a Malaysian couple and having to go through so many obstacles, personal and legal, just to have create their own little family. Getting pregnant is not easy at all.

According to Dr Arasu, a fertility specialist based in Petaling Jaya, age is probably the most important factor when it comes to getting pregnant.

” Time is the biggest enemy. Do not waste time to get pregnant.” – Dr Arasu, Fertility Associates.

Chances are that you don’t have to go through such intense fertility treatments like IVF to have a child. Dr Arasu says that couples should only go for consultations of they still can’t get pregnant after regularly trying for a year.

However, if all else fails and you still want a family, adoption is always an option to consider. Read up here on the what to do and what to expect first, okay. And not to forget the many orphans in Malaysia who need a home. Here is a list of orphanages and children’s homes if you are thinking of adopting an orphan. Because they deserve to have a family. 🙂