What do politicians and toddlers have in common? Y’all know when kids do something wrong and they give whatever excuse off the top of their head, like:

And just like kids who got caught red-handed, our politicians seem to have the habit of saying the darndest things, especially when they’re backed into the corner, or even when they’re not backed into a corner. We couldn’t include everything we’ve dug up with the help of our underpaid interns, otherwise the article’s gonna be a dissertation, but we managed to put together a list of what we think were the strangest, most mind-blowing excuses given by Malaysian politicians. “Why does the Big Sky Abah hate us?” – Takiyuddin, probably. Img by The Star

Two months ago, a flash flood hit Gunung Jerai in Kedah; washing away flora, fauna, and six people who unfortunately perished in the disaster. The Energy and Natural Resources Minister, Datuk Seri Takiyuddin Hassan, had a godly explanation as to what caused it:

It was an act of God, – Takiyuddin, during Minister’s Question Time in Parliament

Anwar wasn’t about to take that sitting down. No, seriously, he stood up to challenge Takiyuddin’s comments, saying that the flash flood was caused by logging, and not the Big Sky Abah. According to Takiyuddin, however, the affected area is part of the Jerai Geopark, and no logging activity is allowed there whatsoever. He also (supposedly) received confirmation from the Kedah state gomen that no logging licenses have been issued in the past three years. That doesn’t rule out the possibility of illegal logging, though, and Anwar has since called for the Energy and Natural Resources Ministry to do a proper investigation into the matter. Every sekolah menengah student learns in school that sea turtles are considered endangered species, but not Ismail Sabri, it seems. Back in 2015, a photo of him and a coupla other VIPs being served turtle eggs at a dinner event in Sandakan surfaced, earning the ire of just about anyone who’s heard of the incident. He denied ever touching the turtle eggs on the table:

During that particular dinner, I did not take any turtle eggs. I only ate fish, because I have to control my cholesterol level – Ismail Sabri

That sounds reasonable, except… more photos emerged which showed half-eaten turtle eggs in the man’s plate. Ismail Sabri then promptly changed his excuses to “I didn’t know it was illegal”, “I didn’t know they were gonna serve turtle eggs”, and “just because they were there doesn’t mean I ate them”. To add fuel to the fire, he likened the incident to an unaware Hindu who’s going to a Malay-Muslim gathering where beef would be served. He went on to sue a Sabah-based newspaper in 2017, and the matter was settled out of court the following year. The former two-time Prime Minister really seemed to have it out for the Jewish race, and he’s said some nasty things about them over the years, including (but not limited to):

He’s gotten called out for these comments – in 2003, former Australian Prime Minister John Howard called Tun M’s comments about Jews ruling the world behind the scenes, well, anti-Semitic, and said that “most Australians would find [what he said] repugnant”. More recently, when an audience member confronted him about his trend of talking smack about Jews after his speech at the World Leaders Forum at Columbia University in New York, Tun M whipped out the free speech card, saying:

I am exercising my right to free speech. Why is it that I can’t say something against the Jews when a lot of people say nasty things about me and about Malaysia and I didn’t protest? – Tun Mahathir at the World Leaders Forum 2018

Funny how he didn’t extend the courtesy of free speech to his critics, though.

NAH, BACA:
8 sworn enemies of Dr. Mahathir who are now supporting him! 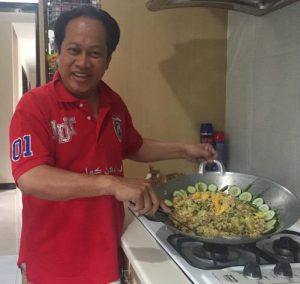 How did he get the cucumber slices so neatly around the rice WHILE frying it? Img from @ahmadmaslan

Where do we start with Ahmad Maslan? The MP for Pontian has achieved meme status for the many, many silly things that have tumbled out of his mouth. There was the time in 2016 when he got roasted for tweeting a photo of himself making “GST-free” fried rice with cans of insecticide within arm’s reach. Netizens found it both infuriating and hilarious, but he felt that it wasn’t a problem since he wasn’t “spraying it into the fried rice”.

In the same year, a reporter tried getting his input on the increase in fuel prices but instead of acknowledging the question, he walked off and started going around shaking peoples’ hands. He probably got flashbacks of being burnt for his comments on fuel prices in 2013 and tried to make a slick escape (see what we did there?).

Here’s one more for y’all: at the beginning of 2021, the Pontian MP received a tongue-lashing from the public when he appeared to have belittled a coconut coconut grater because the latter said that a snap election shouldn’t be held in the midst of the C19 situation.

If they were from the International Islamic University Malaysia (IIUM) or had a PhD, perhaps they would have commented on the issue more accurately, – Ahmad Maslan in an online event on UMNO Online’s Facebook page

He did come out and made an apology later, which is cool and all, but the PhD doesn’t seem to help filter whatever that comes outta his mouth on a day-to-day basis. While we were looking into stuff Malaysians politicians said, we found this gem that we simply couldn’t leave out of the list even though it’s not technically an excuse. So, the story was that Nawawi Ahmad, a former MP for Langkawi, posted on Fesbuk about Denmark’s free education and healthcare system back in , specifically how that was possible only because of a minimum 40% income tax and 25% sales tax. To his credit, he was more or less right about the tax rates – in fact, Denmark’s current cap on income tax is 52.06%.

The trouble was to be found in the comments section of Nawawi’s post… because for some reason people really like to have debates in post comments. A random netizen reminded Nawawi that his salary was paid for by the people… and here’s Nawawi’s reply:

The salaries of MPs are not paid by the people but the government and the government’s money is not the people’s money. Once money has passed on to another quarter, it is no longer our money.

If the government’s money is really the people’s money, let us attack all government departments to take back our money – Nawawi Ahmad, in an argument against a netizen

Again, we’re not here to say whose economic and political points are right or wrong, but boy did Nawawi’s comment go viral. Screenshots of the comment was shared all over the place, and after more spats with netizens, he eventually just shrugged and said he was just trying to turn up the heat during the fasting month.

In the end, what’s important is accountability by politicians

All the quips above are funny when you come across them on the news or your social media feed, but when you think about it, there’s an issue if politicians can mouth off without facing any repercussions. Yes, they’re human, yes, mistakes are sometimes made, but keeping them in check by calling them out on their cow dung should be the norm because it’s only right that as leaders, they take responsibility for their words and set an example for the rest of us plebs.