*Feature image courtesy of Amin Hussin Photography (013-9018350; FB page). Look him up if you’re looking for a photographer in Kelantan!*

Have you heard of the saying, “biar mati anak, jangan mati adat” ? Well, it is a Malay proverb that literally translates to “better for your child to die, than traditions”. If that doesn’t show the importance placed on traditions, CILISOS doesn’t know what else will.

Have you ever been to a Malay wedding in Malaysia? The usage of bunga manggar, kompang and elaborate flower decorations everywhere. Oh, how can we forget those ‘kenduri’ filled with your favourite Malay traditional food like rendang and ayam masak merah! Yes, Malay weddings in Malaysia are rich in traditions and culture. However over the years, the symbolisation in a Malay wedding seem to have lost with time, with many choosing to follow it solely for the sake of ‘adat’ (customs).

So CILISOS, being clueless about all these Malay wedding traditions, decided to direct our queries to Ms Risya. She is a wedding planner with 6 years of experience at Risya Wedding.

1. Why do brides put inai on their hands? If you’ve noticed those pretty, tan-coloured patterns drawn on the bride’s hands, that’s henna or ‘inai’. They are not tattoos, that’s haram for Malaysian Muslim!  Inai, was traditionally done about 3 days before the wedding day, involving close relatives and friends.The inai would cover the legs and hands. Bride and groom would put the inai simultaneously BUT at different locations.

According to Ms Risya, nowadays people choose to do it later, which is the night before the wedding. Some brides choose to cover only their nails with inai, instead of their entire hands.

Why do the couple put inai?

Well, this practice was believed to protect the soon-to-be married couple from everything bad in the world i.e misfortune and malicious spirits. So, inai is kinda like an invisible shield for the married couple. There is an expression that goes with it:


Does it make a difference if the inai covers only the nails and not the hands and legs as well? Don’t think so… Nowadays, people use the inai more for the ‘adat’ than what it symbolises.

To those thinking that this is similar to the Indian culture, well, you are right! There is a reason for it! Long history lesson short; locals in Malaysia were firstly influenced by Hinduism and Buddhism long before Islam came to Malaysia. So, the Malays today still maintain many of their initial influences.

2. Why does the married couple have to sit on that raised platform for so long? Don’t they look like the King and Queen? Image from themalaymailonline.com

First things first, that raised platform is called a ‘pelamin’ or a ‘wedding dais’. Risya tells us that the couple is seated there as a sign to their guests that they just got married, having performed the Akad Nikad. Akad Nikah is the actual religious solemnisation of an Islamic marriage. So, without Akad Nikah the marriage isn’t recoignised… GASP! During the ceremony, the religious official conducting the Akad Nikah would ensure that both parties had entered into the marriage willingly. So, both their consent needs to be obtained.

So why sit on a pelamin?

WE HAVE A MANDAP! Not their actual words. Image from southasianbridemagazine.com

This is another act where the Malay culture in similar to the Indian culture, where a ‘mandap‘ is used. According to this book, the bride and groom will resemble a sultan and sultanah on their thrones. Hence, they are accorded the term ‘raja sehari’ aka ‘King for a day’.

The grandeur and size of the pelamin used were previously depended on the status of the bride’s family. However, now according to The Malay Mail Online, the trend is to have massive decor that catches the eye eg. Moroccan style with a dome and stained glass, anyone?

3. Why so many items being laid out at a wedding… like an art display? Oh look! So many pretty stuff! Image from shazwanihamid.com

Well, these are called ‘hantaran’. Hantaran are basically the gifts that the groom and the bride exchanged with each other. Risya told us that the content of the hantaran depends on the bride and groom. There seem to be no set list as to what should be included, but the usual hantaran includes ‘tepak sirih‘ (betel leaf container) or the ‘sirih junjung‘ (betel nut leaves and accompaniments with beautiful flowers), clothes and bunga rampai (assortment of flowers kinda like potpourri).

Nowadays, the hantaran may even include a handphone or a DSLR, depending on the couples financial capabilities. The hantaran will even come on a beautifully decorated ‘dulang’. Not your plain silver tray, ok!

So, how many ‘dulang’ aka trays of hantaran is enough?

Well, the practice is for the dulang to come in an odd number and for the bride to give 2 dulangs more than the groom. No worries, there is no such thing as a minimum nor a maximum number of dulangs.

There is also this practice called the ‘Langkah Bendul’, where if the bride’s older sister is still single, a gift of some value is given to the older sister too. What better way to get on the elder sister’s good side, right?

Why the odd number of dulangs? Well, CILISOS tried searching for an answer and have failed.  The closest answer CILISOS got was from a comment in a blog post about how in Islam, odd numbers are used a lot.

This hantaran tradition itself is NOT compulsory in Islam. So ugaiz, don’t splurge unnecessarily. Just because the hantaran will be on display, ugaiz don’t have to splurge on it by giving luxury handbags and watches costing thousands of ringgits, if unable to afford them.

4. Why are there always colourful artificial trees that look like fireworks? Ok, firstly, they’re called ‘bunga manggar’, which means the palm blossom of a coconut. The bunga manggar is used to lead a Malay wedding procession along with the kompang. Risya tells CILISOS that in the olden days, the real flowers were used. So, if you think those artificial, colourful tinsel ones look pretty, check out how the actual flower looks like… 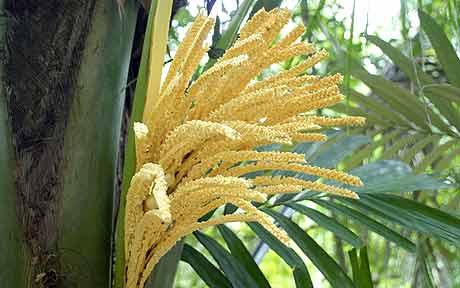 Unique, isn’t it? Image from detoxtrading.co.uk

This newspaper clipping from 1989 states that it symbolises well wishes that the married couple will get a lot of children.

Today, Malay weddings have settled for the artificial ones. Nevertheless they still do invoke a sense of a celebratory mood. Furthermore, no longer is it limited to weddings. Now, the bunga manggar is used to welcome guests of honour in other events.

In Terengganu, the actual bunga manggar is used in the traditional dance called ulit mayang, where the mayang aka coconut palm blossom is believed to chase away evil spirits. So, it welcomes human but chases away evil spirits… ok….

5. Why give people chicken egg? Can’t it be something else? 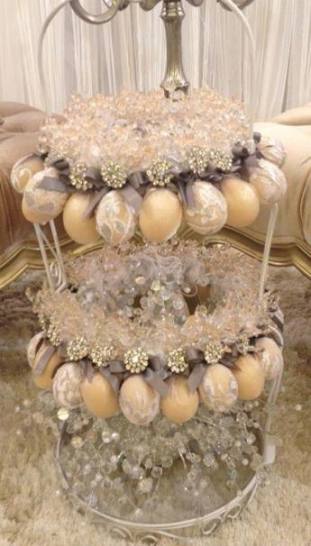 Isn’t it pretty??? Image from anotheraccidentalbride.com

Well that egg thing is called a ‘bunga telur’. Many see this as a staple feature in a Malay wedding.

Previously, it seems that neighbours would donate chicken eggs to the wedding host as their wedding gift to the couple. This would make sense, since eggs are not cheap. Can you imagine the cost of buying eggs for 500 of your wedding guests? The eggs act as a symbol of fertility. By giving away an egg, it is hoped that the newlywed couple will also be blessed with fertility and have tons of children of their own.

Bunga telur is not supposed to be given to every guest according to Ms Risya. It is only given when the guest performed the act of ‘merenjis’ during the wedding cremony.

Now you know this is called “merenjis”! Image from says.com

Merenjis is when the bride and groom  seated on the pelamin are sprinkled with rose water by guests. Then, dough or rice is lightly sprinkled on the couple. This is seen as a sign of good luck and to ward away evil spirits.The person who performed this act on the couple would then be given a bunga telur.

So, a bunga telur is not a ‘door gift’ in the wedding, that’s a completely separate thing.

Nowadays, there are other alternatives to the traditional version of bunga telur. It is called bunga pahar when a boiled quail egg is used instead. The usage of eggs itself might even be replaced with scented soaps, sweets or even chocolates. So, you can actually give something other than chicken eggs. However if you do that, would the bunga telur lose its symbolisation? Probably….

6. Does the groom give dowry to his bride? 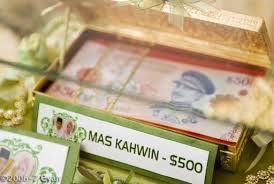 Yes they do, in the form of mas kahwin or mahr. Unlike dowry in other cultures, mas kahwin is seen as a bride’s right (yes, compulsory to give to the bride), with the amount being set by the religious authorities. The amount varies according to state and in some cases whether the bride is a divorcee. For example, the mas kahwin in Selangor is set at RM300.

However, this is just the minimum amount, so the groom can pay more than the amount set. This mas kahwin, once received, belong solely to the wife. The husband cannot use the mas kahwin unless allowed by the wife. So although married, what’s hers in not his, in this case.

CILISOS Translation: This mas kahwin represents the groom’s love, and that he is prepared to live with his wife. It also represents his willingness to sacrifice for the welfare of his family and also the groom’s sign of honour to his bride.

Mas kahwin is NOT wang hantaran? 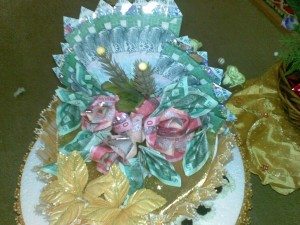 Wang hantaran is kinda like money for the wedding expenses from the groom’s side of the family to the bride’s side of family. This is given along with the hantaran mentioned above. Unlike the mas kahwin, this wang hantaran doesn’t belong solely to the bride. The bride’s family can use this to pay for the cost of wedding preparations.

The figure for wang hantaran is based upon discussion by the families. On social media, some have suggested that the amount be based on the bride’s education. However, many were of the opinion that it places undue burden on the groom to produce such large amount of cash. According to this article in Sinar Harian, this wang hantaran practice is NOT even mandatory in Islam.

The bigger, the better?

Well, CILISOS can’t tell you what is an appropriate amount to spend for a wedding, but it is important to spend within your means. This article by Malaysia Insider states that one of the reasons why couples below 30 divorce early is due to ill-preparedness to shoulder financial burdens. So ugaiz, don’t just think about having grand weddings if you do not have the finance to cover it! It is supposed to be till death do us part not “till debt do us part“. BFM did a video on this, which many think aptly describes the difficulty in getting married.

Also ugaiz, while at times it is good to keep up with times, we shouldn’t forget out roots and our traditions. They were in place for a reason. Think about it, if some thing like languages can be extinct over time, what more traditions if not practiced? Would you really want any of this culture to disappear solely because it may be cause some inconvenience?

Share this article:
NAH, BACA:
Mak Cik Kiahs show us how much $$$ they lose if they can't buka kedai for one day