An 8-year-old genius? Now there’s something you don’t see every day! What makes one a child prodigy? It is a person, who in his or her tender years, develops a talent at levels far beyond the norm for their age… and makes the rest of very, very jealous. Malaysia too has its fair share of child prodigies who have made a name for themselves internationally. Here are 7 kids who have done the country proud.

Mathematics may not have been the favourite subject of some people in school. But for Adi Putra Abdul Ghani, playing with numbers is as easy as breathing itself. Adi is expert in Algebra, Trigonometry and Indices and in fact, teachers turned to him when they faced mathematical problems! 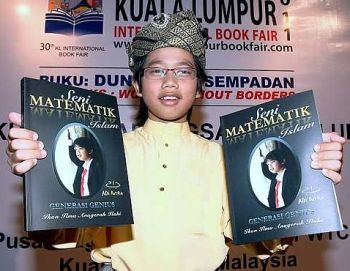 Adi Putra with his book, Seni Matematik Islam. Image from The Star.

Surging into the limelight in 2009 when he was just 10, Adi was invited to lecture at local universities with a very handsome pay of RM6,000 an hour! He had invented 234 new mathematical formulas and learnt 8 languages!! Additionally, he became CEO of 2 companies!!! OK, sure it was his own mother’s companies (selling vitamins under the brand, Adi), but still, for someone to entrust a 10-year-old with a business?!

While other kids are playing with Batu Seremban and Barbie sticker books in school, the Perak-born boy keeps track of foreign stock markets on the Internet. By the time he was 12, Adi had released his first book, Seni Matematik Islam. When the book came out, he expressed his hopes to publish them in English, German, French and Mandarin as well.

“I took a month to write the book. The mathematics formulas that I have created are easy to understand, both for kids and adults. When everyone knows the easy way to learn mathematics, they will become interested and later become proficient.” – Adi Putra Abdul Ghani, Yahoo! News Malaysia Crystal Lee receives her award at the 16th Shanghai International Film Festival. Image from The Star.

She’s such a pretty princess – and she’s a winner of the Best Actress Award at the 16th Shanghai International Film Festival! Crystal Lee received the honour when she was just 10 years old (she’s 11 now, so yep, that was just last year). She’s the youngest actress to have ever won the award. Now which movie is this? It’s the Hong Kong movie, Unbeatable. Her co-star Nick Cheung Ka Fai, who won Best Actor, played a boxer in the movie and Crystal played his neighbour.

At the awards ceremony, the little girl charmed the audience by greeting them in Malay, Japanese, and Cantonese and Shanghai dialects.

“It was such a shock, especially to Crystal, when her name was announced. We had only received an invitation from the festival organisers to attend as guests, and we weren’t even told she was nominated for an award.” – Florence Chua, Crystal’s mother, The Star Wan Kuzain Wan Kamal is an up-and-coming football star whose talent was discovered when he was 12. According to TV3’s broadcast, he impressed many with his ‘kawalan kemas kaki kiri’ which ermm, translated, we believe means ‘neat left-foot control’. A video showing his football prowess was posted by his brother Wan Kuzack and it immediately drew attention to him.

Now 16, the American-born Wan Kuzain might soon become a player with the Feyenoord Youth Academy. According to the coaches, he has the potential to play with any world-class clubs in the future. In fact, he’s nicknamed the American Messi among his St. Louis Scott Gallagher teammates in the US. Wan Kuzain has been training with the under-17 national team as part of their preparation for Under-17 World Cup in 2015.

Hmmm, if we were Harimau Malaya team or the Football Association of Malaysia we’d do something quick to snap him up.

4. Science genius who made eco-friendly dye from waste

Beating out stiff competition in the form of 1,700 students from over 70 countries, 15-year-old Faye Jong Sow Fei’s dream came true when she became the first Malaysian student to ever win top awards at the Intel International Science and Engineering Fair (ISEF). Her ‘Biowaste Materials as Eco-Friendly Mordant in Fabric Dye Process’ project, which we feel is quite ingenious, scooped up the ‘Environmental Management for Best of Category’ and ‘Grand Awards’. The Kuching teen was awarded US$8000 and a trip to Warsaw, Poland to attend the European Union Contest for Young Scientists.

Faye used mangosteen skin, rambutan rinds, pineapple waste, tea bags and fish scales to set dyes on cotton fabrics. All in all, it took her 3 years of research to find the environmentally-friendly natural colorants to substitute synthetic dyes and chemical mordant. “From my research, I found that mangosteen skin was the best mordant. I also used natural onion skin dye in my project,” she explained.

“My dream was not only to participate but also win big in ISEF, and my effort is fruitful today after 3 years working on my project.” – Faye Jong, New Straits Times

LOL, she’s punny too! My effort is “fruitful”, geddit? Most people can only dream of enrolling in Julliard School, New York, but Tengku Ahmad Irfan Tengku Ahmad Shahrizal actually made it in on a scholarship! By the time he’s 13, the musically gifted kid is pursuing a double major in piano and composition, plus an elective in conducting.

Irfan has countless praises heaped on him. His piano professor Dr. Yoheved Kaplinsky said that his work showed “sophistication and depth”.

“His compositions are so mature and sophisticated that even his teachers are amazed that he can do it,” – Dr. Yoheved Kaplinsky, Bernama

Sigh. Irfan, you are every Malaysian parent’s dream. How many of us can boast that a famous composer has written a composition in our honour? But this is a privilege reserved for 9-year-old Magdalene Ho. Like Irfan, she is another Malaysian piano prodigy. Howard Blake composed a duet called ‘Nursery Rhyme Overture’ for her and her younger sister after meeting Magdalene.

She started her first piano lesson when she was 4. One night after coming home from work, her father was listening to Beethoven’s Moonlight Sonata as he relaxed. He saw Magdalene moving her fingers on the table surface as if she was playing on a piano, according to The Ant Daily. Her parents decided to send Magdalene for lessons, but at the first music centre, she only lasted 3 sessions because… the piano teacher couldn’t cope with her fast learning pace! Just 1 year later, she was already performing in concerts.

Magdalene was offered a 3-year scholarship at the Purcell School for Young Musicians in the UK because the tutors were impressed by her incredible sight-reading.

R. Prevena and V. Sushmeetha, both 11 and R. Rasyikash, 13 invented an energy-saving drinks machine and entered it in the British Invention Show (BIS) 2014 in London, reported The Star. And they won the Double Gold Award! The team originally came up with the idea for their school science fair. But after winning the fair and a state-level competition, their teachers encouraged them to submit the invention for BIS. (From left) Prevena, Rasyikash and Sushmeetha back in KLIA after returning victorious. Image from The Star.

Rasyikash who is a former student of the school, SJK(T) Kulim’s, is in the first form at SMJK Chio Min in Kulim. He described how the team of 3 tested different types of rocks on a kettle to identify which one maintained heat the longest.

“We also used sugarcane bagasse (the fibrous matter that remains after sugarcane stalks are crushed for juice extraction) to try to retain heat in the kettle. We found out that basalt rock was the most suitable to retain heat for a longer time and the sugarcane bagasse acted as an insulator. So, for our invention, we glued the bagasse directly onto the kettle and placed the basalt rocks under it, so heat could be maintained for a few hours even after the electricity was cut off.” – R. Rasyikash, The Star

Sushmeetha related that they then flew to London for the event thanks to support from their parents and People’s Progressive Party President Tan Sri M. Kayveas. When she grows up, she wants to be a dental specialist, while Prevena and Rasyikash both aspire to become space scientists.

Having a son or daughter as gifted as these 7 is probably every Malaysian parent’s wish. After all, Malaysian parents are tigers who like to compete with each other. They push their kids to perform, send them for endless tuition classes, and still rely on corporal punishment to ‘motivate’ them.

But is this pushy method really the best way? Look what happened to a one of our prodigies who were ruled with an iron fist. Sufiah Yusof went to Oxford at 13 to study mathematics. In 2001, she ran away from her student flat and was found working as a waitress in a café. She refused to return home saying that her parents made life difficult for her. 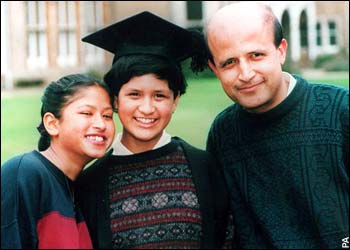 Sufiah Yusof in happier times. Image from The Telegraph.

On the other extreme, Malaysia doesn’t seem to have proper channels where these kids can go to nurture their gifts. There’s the National Association for Gifted Children and that’s about it. But when you look at it, children like Magdalene and Irfan have to go overseas for training because if they stayed here they probably would not have gotten anywhere with their talents. In fact, there’s a case where toddler prodigy Mohd Shukri Hadafi from Baling became a roti canai maker when he grew up.

Let’s compare with Singapore. Their Ministry of Education itself takes great interest in fostering of child geniuses. The ministry formally identifies little prodigies through the Gifted Education Programme. Lim Kit Siang had talked about how we fail our gifted children back in 1997. What he had proposed then is already a reality in Singapore‘s NUS High School.

So to be able to use the slogan ‘Malaysia Boleh’ in its true sense, don’t you think we seriously need to do something (awesome) for our own little Einsteins and Mozarts?