Some of us may remember a few scares involving food within the past year. There’s that time when a lot of people believed that drug dealers are making strawberry-flavored crystal meth (Strawberry Quick) and giving it to schoolchildren. A separate incident involved rumors of colorful drug tablets that look like candy. In fact, we’ve written an article on food scares before, so you might want to check that out. Anyway, while most of them turned out to be nothing but a bunch of crap, a recent incident in Penang can be said to be an urban legend that came true. Picture of the ‘drug candy’ that went viral a few moons ago. Img from NST.

As of the time this article was written, seven people have been hospitalized after drinking instant durian coffee. You might have seen a viral video of two security guards being treated at a hospital after drinking the said coffee, but that was actually the third incident. Sapkotamangal Prasad, 45, and Vishnu Shrestha, 41, received some instant coffee packets from an unidentified lady while on duty, and after drinking the coffee on their break, they reported chest pain, feeling ill, dizziness and lethargy and had to be hospitalized. Screengrabs of the video that went viral. Img taken from Says Malaysia.

Before that, two women with undisclosed names met the same predicament after drinking the same brand of coffee, received from a donor from a temple. Another victim is a 19-year-old male, but not much is known about his case. The latest incident happened last week, after two garbage truck drivers, Mat Dat (60) and Md Ruslan Hussain (59), received a package of the same coffee from their colleague, who found it in a dustbin.

In all incidents (we’re assuming the 19-year-old case to be the same), the coffee was given to them by someone, and they were hospitalized after drinking it. While some people have theorized on social media that the stimulating combination of durian and coffee may be too much to handle for some people…

What the heck was in those coffee packets? 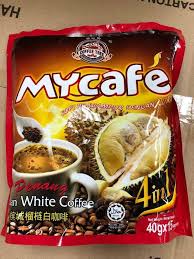 The coffee brand drank by the victims. Img from MustShareNews.

All seven of the victims drank a specific brand of durian coffee called MyCafe 4-in-1 Penang Durian White Coffee, manufactured by a Penang-based company specializing in coffee-based drinks called Coffee Tree. While it may be easy to draw conclusions from this fact, as far as news reports go only these seven people experienced adverse effects after drinking this coffee.

Following reports of the incident, officials from the Ministry of Health went for a visit to the coffee’s factory to test the products, but they found nothing out of the ordinary.

“…there is no evidence right now to pin the blame on its producers. We did not find narcotic elements and do not have any evidence to incriminate the manufacturer,” – Datuk Seri Dr S Subramaniam, Health Minister, for the Star.

“The weight of the packet which had been resealed also showed an additional 10 grammes (g) from the original weight of 40g to 50g and the coffee powder contains a green foreign substance unlike the original coffee premix.” – ACP Anuar Omar, Northeast district police chief, for the Malaysian Times.

Samples of the coffee as well as blood and urine from the victims have been sent for testing, and lab tests showed that the green stuff is actually a kind of synthetic drug rarely used by addicts. Some of the victims have already been discharged after their conditions improved, but may still experience the after-effects of the tainted drink. So why are they possibly doing this?

It could be a drug smuggling gone wrong, or just plain ol’ malicious food tampering. Drugs have been smuggled as Chinese green tea before, so why not coffee? Img from WorldofBuzz.

According to DCP Datuk Kang Chez Chiang, the deputy director of Bukit Aman’s Narcotics Crime Investigation Department, there is also a possibility that the tainted coffee powder is actually the work of a drug syndicate. They were meant for entertainment outlets in Air Itam, Penang, but during delivery they were discarded somewhere, possibly in fear of police action.

This theory made sense for the most recent case where the drug-laced coffee was found in the trash. However, if it is for a drug syndicate, it didn’t explain the women getting the coffee from donations at a temple and the random woman going around giving coffee packets for free. Unless, of course, the first response of people finding a big pile of discarded instant coffee is to share the bounty with others, which may be likely in some cases. For better or for worse. Img from theBudGuru.

The police are investigating the case under Section 272 of the Penal Code, which deals with the adulteration of food and drink intended for sale. However, technically the coffee were given for free in most of the cases, and this particular case seems to lean more towards ‘tampering’ rather than ‘adulterating’. Adulteration of food is more like using cheaper ingredients that may or may not be safe to increase profit, like last year’s case of fake baby milk powder. While the fake milk powder was safe to drink, it was sold at the same price as the genuine product.

Food tampering, on the other hand, is deliberately adding harmful substances to food after they have been manufactured. Both adulteration and tampering of food may hurt the manufacturer’s reputation as well as the consumers, but in this article we’ll be focusing more on the malicious tampering of food. There could be a host of reasons why someone would want to poison random people by tampering with the things they eat or drink, but over the years quite a few large cases have happened with no apparent reason at all. One such case is the Tylenol crisis in the US. Basically, Tylenol is a famous brand of painkiller, and in 1982 seven people were killed after eating random capsules that have been laced with cyanide. Each of the capsule bottles belonging to the victims came from different factories and were bought at different stores, leading the police to believe that it was a case of tampering. The authorities could not find either a motive or the one who poisoned those capsules, but the incident inspired a wave of copycats who would lace drugs at stores with dangerous substances, like rat poison and hydrochloric acid.

At about the same time in Japan, an unidentified group (or single person) calling themselves “the Monster of 21 Faces” harassed Japanese candy manufactures Ezaki Glico and Morinaga. Besides one kidnapping, an arson and generally trolling the police by challenging them to catch the Monster, they also claimed to have laced Glico candies with a potassium cyanide soda, causing Glico to spend a lot of money by recalling their products, forcing them to lay off hundreds of part-time workers in the process. Police officers check Glico products at a supermarket in 1984 in Osaka, Japan. Img from Atlas Obscura.

The Monster later sent letters to news agencies addressed to “Moms of the Nation”, saying that they have placed cyanide-laced Morinaga candies at random stores all over Japan. After extensive searching, the police managed to find 21 boxes of poisoned candy, all helpfully labelled with a sticker that said ‘Danger: Contains Toxins‘ on the boxes. However, the Monster’s identity still eludes the police, and in frustration, a police officer burned himself to death. This caused the Monster to send the police a final letter promising to stop being an ass, and the Monster haven’t been heard of since.

Fast forward to 2003 Italy, there was a case where small amounts of toxic substances like bleach, nail-polish remover and dishwashing liquid were injected into unopened water bottles through small punctures just below the caps, causing a lot of people to be sick. While no one had claimed responsibility for it, it had been attributed to a group called the Acquabomber who the police believe are either radical anti-capitalists or environmentalists, or that it’s a case of commercial sabotage. There are many more cases of food tamperings, but the motive behind them varies from trolling, making a point, making a brand look bad, taking revenge on a company, blackmail, and everything in between. While we have yet to find out the motive behind the incidents in Penang, the factory that produced the durian coffee had lodged a police report against the perpetrator, alleging that it’s an attempt at sabotage.

Regardless of the motive, at the end of the day the ones in immediate danger are the consumers. So…

Here are some ways to protect yourself from food tampering

Unlike Malaysia, food tampering cases are relatively common in the US, so their Food and Drug Administration had released a sort of guideline on how to detect whether the food you’re about to buy or receive had been tampered with. You can read it by clicking this link, but the gist of it is to carefully examine the packaging of the food you’re buying. You can compare the packaging to other similar products to check whether an outer seal or wrapper is missing, and it helps to know what the normal packaging of the food you usually buy looks like. In the case of the durian coffee, the difference is slight, but can be seen: This is where your “OCD” comes in handy. Img from Says.

As for adulterated food, like the fake baby milk powder and fake Milo back in 2015, once the fake product’s existence is known the manufacturers will usually reach out to the media to publish a guide on telling the fake products from the real ones, but if you bought something from a different place it’s helpful to compare the packaging to previous ones you’ve bought.

It goes without saying that you shouldn’t buy or accept food with torn, open or damaged packaging, or look unusual, like canned foods that are leaking or frozen chicken with a torn wrapper. As in the case of the poisoned water in Italy, it helps to check for punctures at the bottle and see whether the bottlecap seal is broken. Some food and medicine have anti-tamper seals, which can come in many shapes and forms, but basically it’s something that breaks the first time you open the packaging.

And most importantly, as said by our wise Health Minister,

“We advise people not to simply consume anything given by strangers,” – Datuk Seri Dr S Subramaniam, for NST. 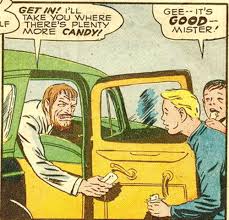 Most people know it, but not many actually practice it. Img from Live Action.

Unless the stranger happened to be a supermarket promoter giving out free samples, of course.

Share this article:
NAH, BACA:
10 Most Outrageous Raids by the JJJ+j+j (JAIS-JAKIM-JAWI+JAIPP+JHEAINS)