Like everything else the Chinese are taking over, they have their hands in the tourism pie as well. Local tour guides find their rice bowl being taken away by Chinese tour guides, particularly in Langkawi and Penang, who charge cheaper. (Well, when there are rice bowls involved)

For the CNY season, the 500 Chinese-speaking LOCAL tour guides in Malaysia have not received even a single booking, industry experts told Nan Yang Siang Pau. Apparently, their Chinese counterparts have monopolised bookings from tour groups from China direct.

Wanna take over, never mind, but you won’t believe the MESSED UP version of local history and legends they’re telling tourists!!

They told tourists that Hang Li Po and Admiral Cheng Ho had… an affair?!! It’s bad enough our local industry is suffering, but for reasons we cannot brain, Chinese tour guides like to add Game of Thrones plot twists to their description of Malaysian historical sights and stories. These inaccuracies are what irk local tour guides the most.

One local guide heard a Chinese guide distort the legend of Langkawi’s Mahsuri and compared her with the villainous Pan Jinlian from 16th-century Chinese novel Water Margin. Mahsuri, if you know the legend, was the wife of warrior Wan Derus, who was slandered for adultery and executed, hence the white blood. Mahsuri was the epitome of virtue, while Pan Jinlian is everything, well, not. She was known as the goddess of brothels and prostitutes.

Another local guide claimed that a Chinese guide told his group of tourists that Admiral Cheng Ho had an affair with Hang Li Po. Aww hell nawww! Hang Li Po turn into Hang Li Ho?! Hang Li Po was a Chinese princess, daughter of a Ming Emperor, who was sent to Malacca to marry Sultan Mansur Shah. Admiral (or Laksamana) Cheng Ho was a diplomat who visited Malacca at least five times during his famous seven voyages to the Western Ocean.

“Some tourists might prefer to hear about scandals. It might make an interesting story but this is wrong. How can they not know that Cheng Ho was a eunuch? Hang Li Po was married to the Melaka Sultan Mansur Shah. (Their version) is disrespectful,” said a local tour guide who requested anonymity, Malaysiakini Mahsuri being executed. Img from pumpkincheeks.com

Disrespectful is right 🙁 Can you imagine if a Malaysian tour guide working in Beijing went around telling tourists that Chairman Mao’s affair with Chiang Kai-Shek went sour, so he turned the whole country communist?!

After local tour guides complained to the authorities to take action against the foreign guides who provide incorrect and confusing information to tourists, the Chinese embassy in Malaysia agreed to investigate. On Friday, 2 Feb, the Chinese Ambassador to Malaysia Bai Tian said that they would investigate the allegations, but pointed out that Chinese tourists really like Malaysia.

“I just learned of this. I will direct the Chinese Consulate in Penang to investigate the allegation. In principle, we reject actions that affect the local tourism industry.” – Bai Tian, Chinese Ambassador to Malaysia, The Star

In order to get one, the Tourism Industry Act 1992 states that a tour guide must go through course(s) of training and pass a proficiency test conducted by the Commissioner of tourism. The course can be completed between 4 to 6 months and the license awarded is valid for up to 3 years. Somehow we doubt after hearing what Chinese tour guides tell tourists about Mahsuri and Hang Li Po, that they would pass the test. At all.

NAH, BACA:
Do we really want Najib to declare a state of Emergency?

You can tell a legit tour guide from an unlicensed one by his/her authorisation card. All tour guides must wear one conspicuously while on duty, conducting any tour or attending any training course. For city tourist guides, the card is blue, while for nature tour guides, it’s green: Industry players told reporters that Chinese tour guides were all working illegally since the law required foreign tour groups to engage local guides. One local claimed that the ones from China would engage one local guide (someone who’s not a Malaysian Chinese) to be on the tour bus to avoid suspicion by the authorities! It’s an offence to pretend to be a tour guide and if caught can be fined not more than RM7,000 or jailed not more than 2 years, or both.

Chinese tour guides not just present in Malaysia… In one of their documentaries, Al Jazeera 101 East spoke to Yolanda, who is a Chinese tour guide trainer in Paris. She has lived in the city for 14 years. She tells her prospective tour guides to teach their tourists on how to behave in Paris, including not cutting queue, speaking softly, and most importantly: “We need to wait. We need to be patient. And sometimes we need to say please and thank you and how you say, be polite? Be polite.”

Even if you take the Chinese tour guides out of the equation, there’s something else local tour guides have to compete against… TECHNOLOGY. Some of them are beginning to realise that on many occasions, their role has been reduced to that of valet. Instead of being able to share the wonders of our country, tourists rely on their smartphones to take photos and research stuff. Mobile apps have made brochures and maps obsolete.

Regardless, there’s one thing the Chinese love to do when they’re travel, and for that, they may still need the help of locals. Shopping!

So, Langkawi is launching its own Chinese tour guide course 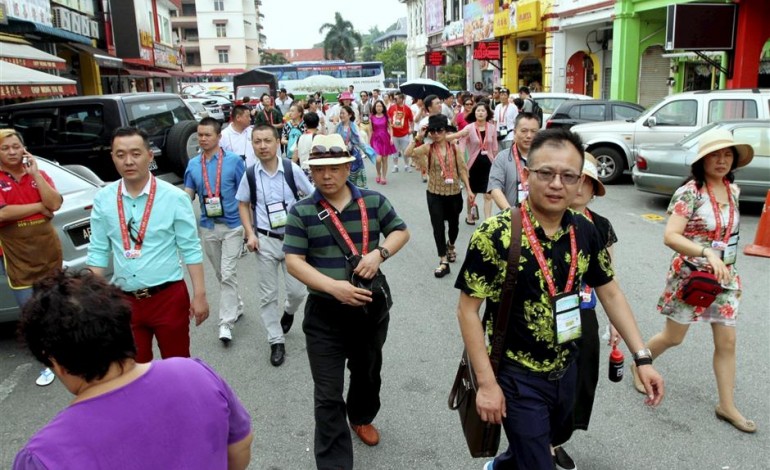 The Chinese are coming. Img from star2.com

Coming back to the increase in Chinese tourists, there has been a growth of 8% to 1.5 mil tourists in 2017, from 1.4 mil in 2016. Datuk Seri Nazri Aziz commented that the ease of access to durian was one of the reasons why they flocked to Malaysia. As Ambassador Bai Tian himself said, “Once a durian is opened, good things will follow”. Nazri was confident we would reach 4 mil tourists from China this year, and 8 mil by 2020.

Given that our country is so popular among the Chinese, there are many opportunities for tour guides. Langkawi MP Dato Nawawi learned that when communication breakdown happens, the Chinese were unable to purchase the items they wanted. And how they spend! They brought BILLIONS of ringgit in tourism receipts, especially for cosmetics! Each Chinese national spends about RM1,700 shopping at the Sepang, Bayan Lepas, Langkawi, Kota Kinabalu and Kuching airports. This is where Nawawi wants to bridge the gap. We know there are apps on phones that can translate basic words like numbers, but having a local guide would be so much more helpful in asking more specific questions about products, especially local stuff, like dodol, batik, craft and more.

Eyeing this market, Nawawi plans to launch a campaign, which includes setting up a Chinese language tourist guide course in order to train Chinese-speaking guides, creating more job opportunities for locals. “I planned to launch a Chinese tour guide course in the community college, those who went to SJKC are eligible to take the course,” he said, though adding that non-Chinese who could speak the language was eligible to apply too.

Would be good to give Chinese tourists a proper version of Admiral Cheng Ho, Hang Li Po and Mahsuri, dontchu think?