Yes, it’s a rather bizarre Wednesday for us. A few weeks ago, Bank Simpanan Nasional launched this bizarre but totally awesome video about a cat with ambitious plans to change Malaysia…

There are more videos here of him making Malaysians happy. You can actually ask him to fulfill your requests as well… just tag him on Twitter, FB or Instagram like this. And if you wanna see what other people are asking, just head on down to www.bsn40tahun.com.my/kucinghappy.aspx 🙂

Yep. And this randomness really seems to be hitting a chord with Malaysians too. Just do a Google Search for “Kucing Happy” and read all the love BSN’s amazingly random mascot is getting for its 40th Anniversary. Strange that BSN has decided that a cat would be the most appropriate messenger to spread happiness to the Malaysian population, but we really can’t argue with the results.

If cats are such great messengers, what else can they do for the benefit of our country. Hmmmm… 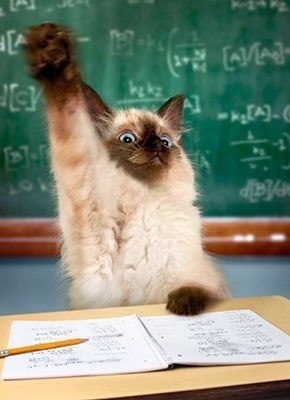 “I know i know pick me!” – Image via Pinterest

Hmmm… maybe they can educate us on something most Malaysians have lost touch with – the artistry of our National Language. One of the things that can really help us to understand a language and a culture is its “sayings” or peribahasa.

And then we found this.

And we realised we don’t really know our National Language.

And that cats could save us! With MEMEssszzzz (from the warped mind of our designer, Dom) that YOU can use in your regular conversation to spread the love FOR our national language. And just to help you along, we explained them too, so you can seem random, smart, AND nationalistic. Meaning: No Man is an Island. Which means…

Wah okay. Random giler… like everything else to do with cats. So what (we think) this means is that things happening around you will affect you eventually. Strangely though, if you’ve ever heard a cat jump, you’ll know it’s like the quietest sound in the world. Except… maybe this cat.

2. Cat’s kid becomes a Tiger yo Sorry about the bizarre image, some of these peribahasas are definitely the results of a warped mind. But this one is definitely one of our favourites – in short, it means that you don’t have to be limited to what you’re born with or what you’ve inherited. Meaning: Some people talk loud loud only until Boss come

This one we know quite prevalent in Malaysia…. so much so that there isn’t an English substitute. Apparently *surprise surprise* most Malaysians don’t really like their bosses. Maybe can send a request to one of #KucingHappy’s employees?

NAH, BACA:
The story behind how Malaysia ended up making the CPUs of the upcoming Xbox 4. If cat no whiskers, mouse not scared anymore Aiyo. This one’s kinda a follow up to the previous one, but now the tables turned on the bosses. It’s actually quite interesting how these peribahasas link to each other (maybe written by the same fler). Especially in Malaysia where titles have such importance, perhaps it’s more important we actually work on being good leaders instead just being called leaders?

5. If Cat grows horns, then only chicken can produce …milk!? The meaning of this is pretty obvious – you wait long long to see that happen la. But what you don’t want to do is Google search milking chickens. No really. You don’t wanna do that. Googling Cat with horns, on the other hand, is much more entertaining 🙂 Ok this one might not be immediately obvious – cos you’d think it’s similar to the term Playing With Fire. But that one was meant for humans. Cats have hair… 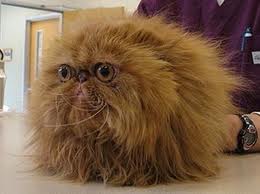 “I lit some candles because I felt like it, but I know she is pretty stupid about fire (this is not the first time I’ve had a problem with her and fire). Suddenly I started smelling that awful smell of burned hair, but Muffins was curling up on blankets in another room. About an hour later, she came and jumped into my lap, and brushed her rather singed tail in my face. As far as I can tell, she’s totally fine, just missing a little bit of fur on her tail.” – Blueraven95, democraticunderground95 Yea, we don’t really get the reference here, but that’s what the dictionary says. What we’re not sure about is why they used grills and cats to describe boys and girls. And heck no, we’re not gonna decide that. Ugaiz decide.

Thank you BSN for bringing some Happy to Malaysia!

No one will deny that it’s been a tough time for Malaysia lately. So we’re honestly grateful for one of Malaysia’s oldest local banks, to take a real, genuine effort to cheer up the Rakyat 🙂 In fact, when we went to their website, it was stated that aside from encouraging savings (which Malaysia could definitely do more of), one of their missions was this….

Oh, and if you can use these images in a regular conversation with your friends, send it to us at [email protected] with the title “Peribahasa Kucing Yo!” and we might include them in this article and ask #KucingHappy for an appropriate reward 🙂

Sponsored content aside, thanks BSN, and Happy 40th from us here at CILISOS 🙂