My name is Natashya and I consist of three races – Chinese, Indian and Malay. 😆 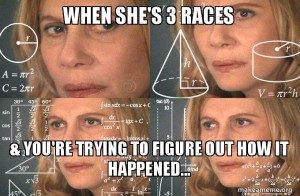 It’s a science. Photo from Make a Meme

My dad is Chindian and my mum’s Malay, which resulted in the blend that is me. To add to the confusion, my parents signed me up to study in a government Chinese school right up to Form 5, where I was the only brown girl in a school of almost 500 hundred girls!

How my parents got together is a story for another day, but safe to say that it came with backlash, because even some Ministers are against the idea of mixed-race marriages- what more people who are a bit more old-school? What’s heartening is that mixed-race marriages have started becoming more popular in recent years, and that there are more and more people who are more mixed than a rojak stall. Yay!

Being as mixed up as I am, there are a whole set of ups and downs, so here are 6 of them:

1. In primary school, nothing seemed off… except that I was called a black ghost

I grew up experiencing the same ups and downs that any little girl would face, from liking boys to watching High School musical. The only thing that was different was I got a lot of compliments, but even that felt normal. People have told me that I look like a model, or a certain celebrity. One time, someone even said I looked like Rihanna during her Umbrella-ella-ella phase. 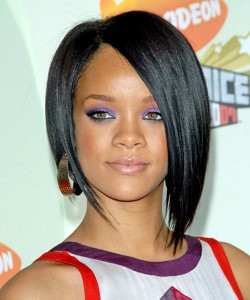 I’m not too sure how it works, but mashing up features from two or more races ends up in a mishmash of interesting proportions! Apparently, mixed race people are also more attractive! But everyone is beautiful pls chill ok.

On the flip side, people called me a lot of nasty names too. I had this girl who bullied me relentlessly. She’d steal my books and call me a ‘black ghost’, whatever that meant. I also got called an apunene (how do people come up with these names?!). This bullying goes beyond peers – I’ve had a relative ask me if I wanted to get ‘treatment’ so that my skin could become fairer (a treatment which involved needles!!), and I was like, 13?!

For some reason, brown skin is seen as bad (as one Cilisos writer had to tahan), especially for the younger generation. Research even says that dark skin is associated with evil, which is probably why some parents scare their children with the ‘brown guy will catch you’ story. A staple in our home were whitening lotions, which is pretty much a coveted thing in Malaysia and Asia. After years of applying it, let me tell you up front – save your time and money, fam.

2. Then 1Malaysia happened and it helped me explain my three race blend in short form (no offense, East Malaysians)

Once 1Malaysia became a thing in 2010 -never mind what 1Malaysia actually was- it was like the godfather of discoveries to realise that my heritage consisted of the three main races of the country (with the exception of Orang Asli) (sorry again East Malaysians), making me a poster child for the unity that 1Malaysia represented . It has made me realise that if I ran for PM, I would totally win because Chinese, Indians, Malays AND women would vote for me. 😛

Thanks gomen. Photo from Wikipedia

After that happened, if my life was a Facebook status, my top comment became, “wah, you’re so 1Malaysia!”, complete with really cute WOW reaction. Then only I realised, eh actually I quite different la. For example, mine was the only name that took up TWO ROWS in my class list – a trait of mixed race kids, really, having a long name.

In primary school, it became a sport for classmates to memorise my full name, all six words of it. When the game was a bit heated, my friends came up to me and tried to recite my name, and the winners would rejoice.   😆

3. Everyone guesses wrong when they try to guess my race; some people even think I’m Thai! 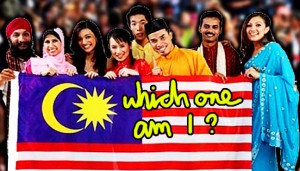 Since I clearly don’t look Chinese, my Chinese friends mostly say that I look Chindian, Malays always think that I’m Malay (even with my best banana accent, if there is one), and my Indian friends think that I’m just Indian, but fairer sikit. But international friends! Oh my gosh. I’ve had people speak Thai to me on orientation day (maybe it’s because they originate from Malaysia?), and people have asked me if I’m everything from Indonesian to Mauritian.

Anyway, over the years I’ve collected quite a series, if you may, of different identities. The confusion actually comes from the cross-race effect, where you identify based on your own race. Meaning if you’re Thai, you might see features in me that look Thai to you! Isn’t that fascinating? Once, I’ve had someone not believe my many races and I had to show them my IC!

4. During festival season, I get ang pow, duit raya and… murukku? From CNY to Christmas to Hari Raya, my ponteng life game (please don’t fire me Cilisos) has always been strong because I’m always off celebrating one festival or another. We don’t always get a lot of holidays for non-Chinese festivals, so I would declare my own holidays and be off.

Chinese school teachers tend to be lax on homework when it’s CNY break, but RUTHLESS in giving piles of work for students to finish over Raya break (think 10 pages of Math). I could never understand why, until I realised that I was the only person who didn’t have time to finish it! My first day back at school was just spent copying homework from the girl who sat next to me (thanks Phoebe).

I think my record was a solid week off school without official school holidays. When I came back, my teachers would just shake their heads and ask me to pass up my homework the following week. Score!

My celebrations weren’t just fun, they were also very… fruitful. I get ang pow, duit raya AND Christmas presents each year. During Deepavali, our house will be filled with all the good snacks. Free things, who dowan? 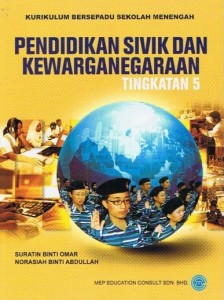 I did not need you! Image from Mehraj Books

There are some things that would be little different for my family, though. For instance, my mother, who is the Malay side of the equation, would have to be very intentional in staying away from the pork snacks during CNY. Also, the Indian side of my family are Christians, so Deepavali and Thaipusam would be celebrated mostly at home with some extra murukku from the aunty next door.

5. Even after graduating, I can still speak Chinese

I pulled straight C’s for Bahasa Cina in Chinese school (not like it matters because people don’t even expect me to speak in Chinese tbh), but it still means that I can read, write and speak Mandarin fairly decently.

In Chinese school, you don’t realise this is weird until you come out into the real world. A lot of people see my brown face (albeit fairer) and assume that I’m a coconut. But suddenly BOOM, my ching chong appears and scares the life out of everyone.

Once, I was with a stranger in the lift and she had a child with her. Her child was a little restless and was making a lot of noise. In Mandarin, the mom tells her that I (as in, me) will get totally cheesed off if she continues with her behaviour. So, I respond, telling the child that I will not get mad at her, and the both of them instantly shut up. Talk la somemore.

Mandarin aside, I also speak a little bit of Hokkien, with English and Malay, because that’s what we do here in good ol’ 马来西亚 (that means Malaysia!). I can’t speak Tamil, but I can order a solid banana leaf with all the works, which is what matters, really. A lot of aunties and uncles have asked me to pick the language up, so I might la. All that matters in life. Photo from The Malay Mail Online

Yes, the many languages in the mix tend to overlap when I speak. Sentences like, macha ni ok ma (friend, are you okay) or, dei, can makan already anot (friend, can we eat already) are really common in my vocabulary. My brain THINKS in a few languages too, which means I’ve accidentally spoken Mandarin to my Malay friends, and English to the banana leaf guy, who’s usually Indian. I have also been said to sleep-talk in Mandarin, so maybe my brain is wired differently after all.

Some people think it’s super cool to know so many languages, which I have to admit is really fun! Research even shows that it’s good for the brain, and even makes you sexier 😉 But at the same time, it’s something that’s become so normal. But we’re on the train of making my normal not-so-normal, and making your-not-so normal normal, so does it really matter?

6. People ask me what kind of guy I’d rather date Now that I’m out of all-girls school, I finally am exposed to the male species, and people ask me which race I would rather date. My boyfriend is Indian, and when I first got together with him, one of my close friends was shocked because she thought that I would date a Chinese boy! That question aside, people ask me weird stuff all the time! Some questions still make sense, like whether I fast during Ramadhan or if I can eat pork. But some, I cannot:

I guess, though, I’ve had to learn to not roll my eyes at some questions because some people genuinely want to know. So I try to answer questions to educate people on how it’s like to be mixed, and not just leave them as they are. Because let’s face it, life like this is pretty cool! Just ask these people.

But despite all those questions, one question that always comes up is this:

“Which race do you identify with the most?” When I was 7, my teacher asked me what race I was, and I told her, everything, because that’s all I knew. She wasn’t too happy with that answer. “So are you Kadazan? Are you Iban?” she taunted, pointing to the Moral Studies textbook. I didn’t know and I started to cry as both her and my whole class started to laugh at me.

Looking back, does that question really matter? Since colonial times, we have been separated by race and struggle to this day to move on. But there is hope. From East Malaysia removing the lain-lain column in forms to the increase of mixed marriages, I am reminded how my rojakness could not exist if not for the blend that is Malaysia.