One studys shows that in 1999, only 10% of students failed to meet the minimum proficiency in Science and Maths, whereas in 2011, more than 30% of students failed. Another study shows that Malaysia is placed third of out of 74 countries in an international assessment test. Wait, that’s not too bad…not too bad if it weren’t third from the BOTTOM! So depressing!

ONE of the reasons for failing in school is if a student gets a bad teacher and comes from a poorer family that can’t afford tuition. The student will be totally lost in class, fail, and finally drops out.

Of course, there are some kids who memang don’t wanna focus in class la that’s why they fail. But here we’re talking about students who really want to study, but got a bad break and don’t have the money to supplement their education with tuition classes. How do you solve a problem like that? Poverty is a horrible cycle that plays over and over again. That is until… 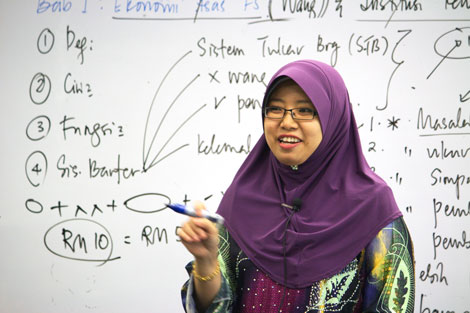 They are experienced teachers from government schools. Image from bac.edu.my

From BM, to English, to Maths, to Science…videos of every chapter for different subject, from Standard 1 to Form 5, are being created by a social enterprise called EduNation.

First, we’ll explain how to use this resource. Go to to EduNation’s website and select the ‘I am a student’ button. On that page, you can pick your form, subject and chapter. We picked Form 5, Additional Mathematics, Chapter 5, and it brought us straight to their videos. Here’s one:

It’s really that simple! Today, they’ve got over 3,500 videos for 12 subjects in BM, English, Tamil and Mandarin. The videos have notes, which students can copy down in their own exercise books, as they listen to voice overs by the teachers, who explain the notes. EduNation recruited 12 teachers who have plenty of experience, they are senior teachers who are experts in their field. Check out their credentials here.

Besides videos, they also provide exercises and test papers which students can practise on and track their progress.

But not all of their activities are only online… they also have other projects where they engage students in their schools, such as one where they trained students to mentor other students and develop skills like empathy and openness. The result of that was students showing a 30% improvement of their Maths score. To read more on their other projects, click here.

Best part about the whole EduNation initiative is, everything is FREE and the videos can be replayed as many times as a student needs so they can learn at their own pace. In that sense, it’s better than tuition coz for tuition you pay a fee for only a one-hour class.

Srsly, who are the people behind EduNation and why they so nice, doing this for free? He is Raja Singham and he co-founded this initiative in August 2012 with Edmond Yap, who was previously a Civil Engineer. Some of us might know Raja as the guy who founded Brickfields Asia College (BAC) in 1991 when he was only 24 years old. They wanted to give underprivileged students from poor financial background easy access to FREE primary and secondary education resources online through these videos.

CILISOS had a chat with Edmond who told us why he wanted to do this. It was because of an orphan Form 3 kid called John, whom he tutored in 2005. One day, John asked Edmond a complicated Maths question. No matter how simple Edmond tried to explain it, John just couldn’t understand. Eventually he asked John what is 1/2 + 1/2. John said 1/4. That’s when Edmond realised this kid had NO basic at all…and it was a month before PMR exams!!

“I did something I wasn’t proud of. I ran. I never saw John or went to any other orphanage again. The ghost of John has been haunting me ever since, because the difference was that John really wanted to learn.” – Edmond told CILISOS By EduNation’s estimates, there could be a million lost kids out there…just like John!

After leaving his job in civil engineering, he spent a year and a half trying to get support from colleges and education companies. This was how he pitched the idea to them – why spend so much money on billboard when we can make an actual difference? Most people thought it was a bad idea.

“I was totally broke at one point. When me and my wife ran out of rice, we spent 10 minutes debating which bag of rice to buy. The difference in price for the two bags of rice was 50 sen.” – Edmond

OMG!! But finally Edmond’s big break came when he went to BAC! He initially asked for RM100k per year, but they liked the initiative so much that they ended up giving EduNation RM500k the first year, then RM1 mil a year, after that. “BAC is very special to us. It wasn’t just a sponsorship item to them. It was a way for them to help lots of kids,” Edmond tells us. The social enterprise’s early days began by advocating Khan Academy in the country (Khan Academy is an NGO created to provide free education for anyone, anywhere. It produces short YouTube lecture videos). In fact, they were actually inspired by Khan Academy. Then they thought, why not create their own videos? And that’s how it started!

Today their team is pretty big, with people in charge of making the videos, of the online exercises, recruiting and training teachers, lazing and lying around (that would be Crispy, their kitty mascot, pic right), and so on. Edmond himself is the money man. He is in charge of funding. EduNation is fully funded by, yep, the BAC Education Group, plus they work with various corporations to keep the videos free for all. Those who wanna help them out can do so here.

So what difference can EduNation make in the lives of Malaysian students? Bacman as in BAC, geddit? 😉

Over the past 3 years, EduNation has gotten 3.3 million views, with 93,230 students watching their videos, attending their seminars and participating in their programs. Here’s what students themselves have to say:

“Although I’ve never met her, Cikgu Mahani’s teaching style is perfect for me. I can easily understand an entire chapter after watching her videos.” – Issabelle Voon Jia Yi from SMK Lutong, Sarawak

*Issabelle was the only candidate in her school to sit for Ekonomi Asas. To make matters worse, she didn’t have a teacher! Two months before SPM, she found EduNation’s videos. She got an A+ for Ekonomi Asas. 🙂

“The best part about these videos is that you can watch the topics weeks before it is being taught in school and more importantly, you could watch them repeatedly until it’s really in your brain (something you can’t do in school)!” – Vydhourie RT Thiyageswara from SMK Convent Klang, Selangor There could be hundreds of Johns in the schools in our country…students who WANT to study and make something of themselves when they grow up. They desperately need a break and that’s what organisations like EduNation are here to give them.

Remember earlier we talked about the poverty cycle? By giving students free tuition, these kids would be able to understand their subjects (bad teacher or not), then they will be able to score well in exams, go to college, get a degree and find higher paying jobs, finally breaking that poverty cycle!! As Barack Obama said, the best anti-poverty program is a world class education.