You might remember the many kidnappings in Sabah, with the kidnap victims being both locals and foreigners. While researching for our previous article about kidnappings in that region, we came across a story that is particularly interesting but tragic.

Hailing from Germany, long-time sailing couple Jurgen Kantner and Sabine Merz were kidnapped and killed by Abu Sayyaf militants off Tanjung Luuk Pisuk, which some sources say is in Southern Philippines (The Star) while others say is in Sabah (Manila Bulletin, The Sun, and Mapcarta). But this is not what this article is about. Apparently, this was not the first time they got kidnapped.

When they got kidnapped in Somalia, they tried to outsmart their kidnappers using their differences 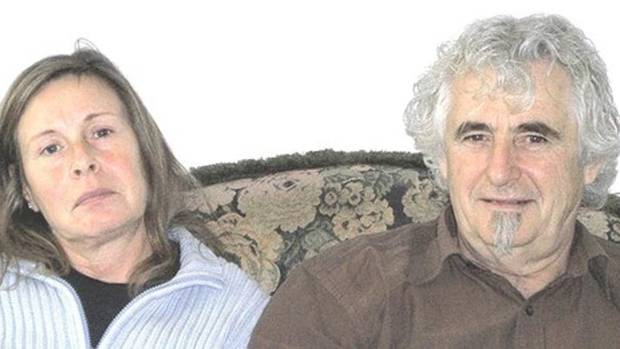 We couldn’t find much about Kantner’s life before his sailing career (except a brief mention that he’s a former restaurateur and a heating engineer), maybe because he’s been sailing for most of his adult life.

“At 28, I bought my first boat. All in all, I have been living on the water for over 30 years, working on ships, making boat transfers, and they pay well. I lived with my family for 14 years on the sailboat. My two children grew up there.” – Kantner told in an interview with Stern magazine (German).

We also found out in the Stern interview that Merz was probably not his first wife either when the interviewer asked in German, “Mrs Merz, what fascinated you about Mr Kantner when you first met him four years ago?”. At the time, Merz and Kantner were already in their 50s and 60s respectively, so you do the math. Oh, and her answer to that question was that he’s reliable. The couple during happier times. Image from SAIL.

After some time together, the couple made the decision to take things further… with an adventure. This may have seemed normal for Kantner, but for Merz, it was her first sailing trip. After selling everything and quitting her job, the couple started their journey in the summer of 2007 by driving their yacht from France through the Mediterranean, spending some time in Crete, the Suez Canal and the Red Sea. It was “like paradise” for a while.

However, that paradise ended in mid-2008 when they attempted to take the quickest route to Asia – via the Gulf of Aden, between Yemen and Somalia. Kantner had been there 3 times without trouble, but this time, he and his wife weren’t so lucky. The Gulf of Aden. Image from Yacht.

As they were leaving the shipping lane in Aden, Kantner heard the sound of boat engines at maximum speed. He knew at that moment that they were screwed because he knew that fishermen don’t drive their boats at max speed. So, he told Merz, “Go below deck and get dressed quickly” while he took his shotgun from under the bunk and loaded.

However, his shotgun didn’t do much justice since everything happened in a blink of an eye. One of the two boats rammed into the couple’s yacht (named Rockall) and a bunch of men armed with assault rifles and rocket launchers came on board, so he hid his gun to avoid getting shot immediately. The pirates told the couple that they just wanted to wait with them to hijack a bigger ship. In an attempt to win their trust, Kantner cooked for them and repaired their boarding ladder. Strangely, when a big ship came, the pirates suddenly dowan to hijack that ship and wanted the couple instead.

An argument ensued within the group of pirates, and by the end of it, the pirates ordered Kantner to drive Rockall over to Somalia using engine power for 100 miles. Kantner wanted to stay in the shipping lane long enough for someone to notice the situation, so Kantner told them that the engine was spoiled. “One of them held his gun to my head and threatened: If you do not turn it on, you will be shot immediately. Sabine was behind me …” – Kantner.

“… and I stood in front of him and said: If you shoot my husband, then you have to shoot me with the same. One of them pushed up the shooter’s arm, and the bullet went right over our heads.” – Merz.

Taking advantage of the pirates’ lack of boat engine and sailing knowledge as well as having two ignition switches of which one was spoiled, Kantner hid the key from the wired switch and turned it on the spoiled one to prove that it wasn’t working. But it took a while to convince the pirates as one of them put a noose around Kantner’s neck and threatened to hang him.

As Merz recalled, four fellas grabbed her and wanted to throw her overboard. She tried to defend herself while holding on to the rail but they still managed to throw her in their boat. So, Kantner told them, “Okay, bring my wife back on board, I turn on the machine” and repeated the spoiled ignition switch move.

When the pirates were finally convinced that it didn’t work, they ordered him to sail to Somalia. But the experienced sailor responded that the wind would only blow them towards Asia and not Somalia. Since they dunno sailing well, the pirates gave Kantner the benefit of the doubt and allowed him to work his magic.

NAH, BACA:
Eh, who dis Malay singer that has millions of fans in...China??

While sailing, the couple actually had the chance to escape since the pirates were hungry, tired and drunk. The couple wanted to kill them with a butcher’s ax and an iron pipe, but for fear of the noise it would make if they struck one of the sleeping pirates, they dropped the idea. After 2 days on drift, the pirates decided to tow Rockall with their little boats, landing in the Puntland region 11 hours later, where they were in captivity for 52 days.

Not an actual Somali pirate, but close enough.

In the 2008 Yacht interview, Kantner justified that having a gun was useful in self-defence, especially after going through a lot of mock executions and an attempted rape for intimidation.

“We suffered a lot in captivity in many ways. For example, after the pirates took us ashore, someone tried to rape Sabine. And once, when we were separated, I heard two shots. They told me that they had just killed Sabine, and now it’s my turn.

They hit me with a rifle butt – my teeth are still loose – and wanted to blindfold me, but I resisted. I wanted to face my killer. He hung up on me, pulled the trigger and it clicked. The rifle was not loaded. It was an execution without death.” – Kantner.

At the same time, as the pirates insisted that the German govt pay the ransom, Kantner had to make the calls to negotiate. Kantner tried to exploit the pirates’ lack of German fluency by exposing their exact location using a smuggled GPS device and asking the officials in Germany to send a helicopter over, but Kantner alleged that nothing was done. As days went by, the pirates were losing their patience and keeping up with the threats. Thankfully, he was rescued.. but then he went back to Somalia for his yacht!

The ordeal came to an end when a ransom payment of $600,000 was reportedly delivered by Puntland officials. They were released and flown back to Germany. But the return turned out gloomier than it should have been.

“My perspective in Germany would be to continue to sleep on the floor with my mother in a retirement home, as we have done for months after our release. So, what should I do there? Besides, after a long time abroad, I have no friends at home anymore. And I can forget a job or financial support, I’m not entitled to anything.” – Kantner.

Plus, Kantner was still salty about the alleged lack of assistance from the German authorities. However, things didn’t seem so depressing for long when, in 2009, a Somali living in Germany contacted Kantner and told him where the seized Rockall was. The couple in Somalia in 2009. Image from Newsweek.

Despite being advised to stay home, the “mad German sailor” and his wife boarded a plane to Kenya and drove to Somalia by car to find their beloved yacht, which was totally looted, from the ship parts to the possessions kept in it, with the exception of the sails.

Weirdly enough, they found out that it wasn’t just the pirates who stole their cash, clothes and alcohol, but also the Coastguard who stole a lot more from Rockall and sold the items to the locals. Thus, he and Merz, with the help of some locals, had to find replacement parts from scrap, like installing an engine from an old Toyota. Merz with the engine replacement. Image from Yacht.

Meanwhile, they also made preps to defend themselves during their next sailing trip in Malaysia, so they could enjoy a nice holiday there.

“The last time they went straight for the drinks. So I’ll fill the bottles in my Schapp with acid. Then I make myself some Molotov cocktails, which I keep constantly in the cockpit.” – Kantner.

Sadly, their adventure was cut short when they got kidnapped again, this time in Tanjung Luuk Pisuk.

In fact, they weren’t so fortunate the second time

When the Abu Sayyaf militants came across Rockall cruising along Tanjong Luuk Pisuk, they waged an attack. The Abu Sayyaf spokesman alleged that Merz resisted and tried to shoot them, so they killed her. Kantner, on the other hand, was captured and held for some time.

Fast forward to February 2017, a video by Abu Sayyaf was circulated. Not more than 2 minutes, the video showed Kantner saying that the militants would behead him soon if they did not receive $600,000 in ransom by the deadline.

“Now they’ll kill me.” – Kantner allegedly said in the video. 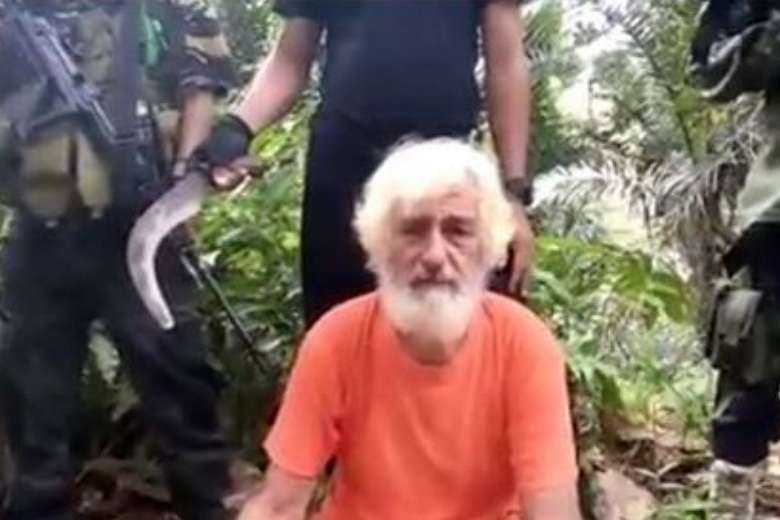 Before his execution. Image from Straits Times.

Despite the pleading, he wasn’t saved. A week after he was beheaded, the soldiers managed to find his head and body and brought his remains to a hospital morgue in Sulu while arranging with the German embassy to transport his body back to Germany for burial (however, we  didn’t see anyone mentioning anything about the burial of Merz’s body).

It’s truly sad that their lives have tragically ended at the hands of the militants, but this couple probably wouldn’t have it any other way. In the interviews, the couple were firm in saying that they’d rather live and die while aboard a ship than to live and die bored at home.

“Sailing is how I want to live and die.” – Kantner.