If you live or work in a high-rise building, you might have experienced a scary thunderstorm or two. Especially if you live in the Klang Valley, dubbed as the world’s ‘crown of lightning‘ due to the volume of thunderstorms that happen there each year.

Lightning does more than fry laptops and ruin your fridge. In 2006, lightning struck some fuel tanks in Pasir Gudang, Johor that caused a massive fire that can be seen all the way to Singapore. In 2011, three wards of Putrajaya Hospital caught fire after it was struck by lightning. Numerous Malaysians have been killed or injured by lightning over the years, and the number had not decreased at all.

Plus, lightning strikes are estimated to cause some RM250 million in damages each year, so the recent news about a Malaysian woman who was claimed to have solved the world’s lightning vs high buildings problem is something to be excited about. High buildings have became as inevitable as lightning. Img from wallpaper.mob.org.

Well, maybe not so recent, but it picked up recently. An article published in the News Straits Times told of a Johorean electrical engineer, Robiah Ibrahim, who came up with a method for accurately predicting where lightning will strike a building. This discovery came after she and her husband, Hartono Zainal Abidin (who co-authored the research and wrote the NST article) spent the previous three decades analyzing data of lightning damage on buildings in KL and Singapore.

Given that most of us find lightning to be almost completely random events, the fact that her discovery can pinpoint where lightning will strike a building 98% of the time makes it even more amazing. Her method was eventually adapted by the International Electrotechnical Commission (IEC), an international body that draws up standards about all things electrical, and it was included in one of those standards (IEC62305 – Protection Against Lightning) in 2006. This means that her method is now used globally to protect buildings from lightning.

That must be some amazing method she discovered there. But to understand what exactly did she find, it’s helpful to first understand roughly that…

This whole header, in a nutshell. Img from SciJinks.

Basically, lightning happens when the shaking and moving of the clouds cause an imbalance of electrical charges. To equalize it, a cloud sort of offloads its negativity to the ground. You can read a simple explanation of how lightning works here. To do that, the cloud sort of sends down… well, not the cloud, but let’s not get too technical. Anyways, the cloud sends down a bundle of negative charges (called a stepped leader) that branches as it tries to find the easiest route down.

This approaching bundle of negativity attracts the positive charges that collect on tall things below the cloud, and when both parts connect, a lightning (or a return stroke) happens.

The distance at which they connect is called the striking distance, and this distance will be important later on. If that’s still a little too hard to understand, here’s a very unscientific comic strip explaining it. So, now that you know that buildings themselves also play a part in lightning, how would you go about protecting them?

People have tried to protect buildings from lightning in the past, but the problem is guessing where it will strike

Chances are, you’ve seen these spikes on the roof of your school before. It’s used to impale bad students who climb the roofs. Img from ground.co.kr.

Commonly, they’re known as lightning rods, but in the lightning protection industry, they’re called air terminals. This particular type is called a Franklin rod. They work by redirecting lightning into the ground instead of through the building. Historically, people believed that each lightning rod will protect the area below it in the form of a cone, like so: 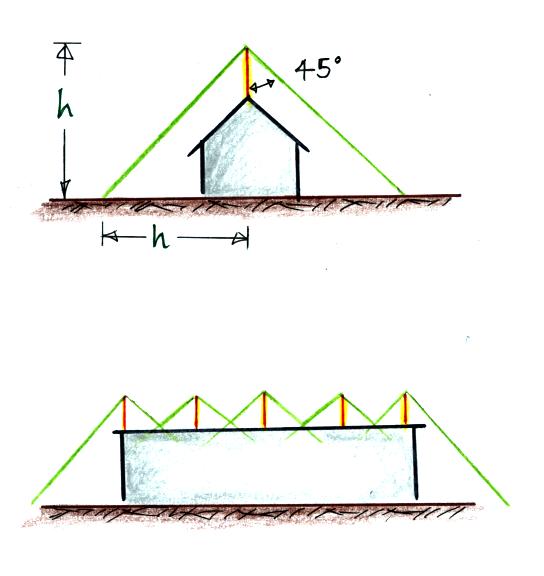 This method is called the Cone of Protection Method (CPM), and it’s believed that as long as a building stays within the cone, lightning will strike the lightning rods instead of them. However, this method didn’t work as well as theory. In 2001 Hartono and Robiah found that lightning often bypassed these cones, and cases where they do, they favored sharp corners and edges of the building to the lightning rods.

People also used the Rolling Sphere Method (RSM) to guesstimate a building’s safety, and this method involves imagining a ball of a certain size rolling around a building. Surfaces of the building not touched by the ball are considered safe from lightning. Like so: 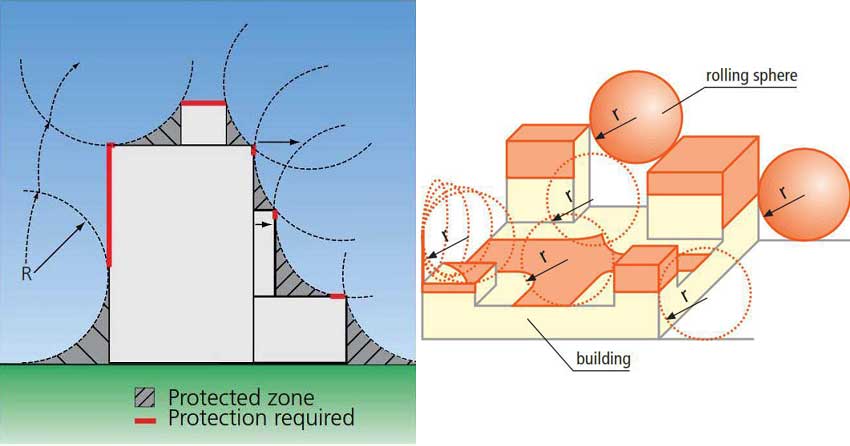 Or you could imagine rolling a giant ball soaked in paint over a building. Missed spots are safe from lightning. Img from Bornika.ir.

The size of the ball is derived from the striking distance of lightning on the building. Generally the radius is estimated to be around 45 meters, but it can vary depending on circumstances. However, the problem with this method is that it only shows which parts of the building can be hit by lightning, but not where specifically. You can’t realistically cover the whole roof with them (a single rod may cost more than RM30).

So the challenge here is to strategically place as few lightning rods as possible while still keeping the building safe, but how do you determine the exact points? This is where Robiah’s method, the Collection Surface Method (CSM), comes in.

Robiah’s method can tell which exposed parts will be hit, even on complex structures

In her paper, Robiah studied the lightning damages on real buildings in Malaysia, and she observed that most of the lightning strikes on buildings happened on their pointy corners. A very small percentage happen on the edges and flat surfaces, but these strikes were also very near the corners. None of the strikes happened elsewhere on the buildings. Because of that, she noticed lightning finds pointy corners very sexy.

Much like other pointy things in nature. Img from Giphy.

She then took the concept behind the Rolling Sphere Method and came up with a theory that involves looking at the path taken by the center of the sphere instead as it rolls around the building. Locus is like the trail of a moving point. Img from Hartono and Robiah’s paper. Um… still don’t get it. Img from Hartono and Robiah’s paper.

As the striking distance increases, the arcs generated by rolling over pointier points increase in size. This translates as the point’s probability to be hit by lightning, and as can be seen, point C has significantly less chance to be struck compared to point A, while point B is not very likely to be struck. She then proceeded to test her theory against real buildings, like the Villa Putra apartment in KL. After predicting where lightning will strike the building (boxes in the diagram below) and comparing it to actual lightning strikes (black dots), she ended up with this: 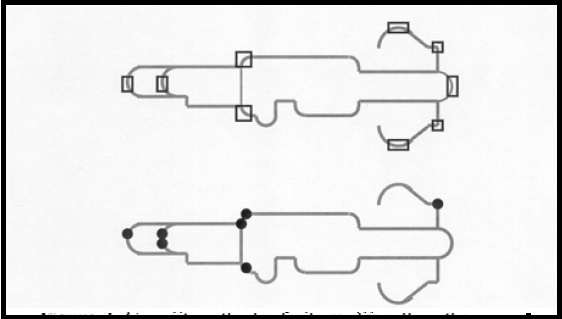 Top view of the Villa Putra apartment. Img from Hartono and Rubiah’s study.

The theory checks out, and that’s not all. In her paper, she applied the theory to differently-sized and shaped buildings, and in all cases, it’s possible to predict where lightning will or will not strike these buildings. All these can be done with as much effort as scribbling away at a building’s plans.

The discovery is pretty amazing, and while it happened more than 20 years ago… 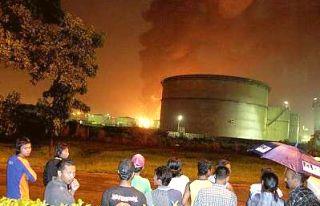 The fire at Pasir Gudang in 2006 was caused by a lightning strike. Img from the Star.

While Robiah discovered the method in 1995, it took over two decades for the Malaysian government to implement in in their standard (2011). However, even now, most of the buildings in Malaysia are still inadequately protected. Dr Mohd Zainal, director of Malaysia’s Center of Electromagnetic and Lightning Protection Research (Celp), believes that this is because the standard is rarely enforced, and this led to developers and building managements choosing cheaper methods that may be popular but wrong.

“There really isn’t any clear authority or consistent approach for lightning protection here. The MS IEC standard isn’t tied to any law and jurisdiction between Federal and local government makes it hard to implement,” – Dr Mohd Zainal, for the Star.

He further revealed that one of the most popular methods of lightning protection here is the Early Streamer Lightning Protection, which involves metal rods that is claimed to actively attract lightning. While they’re relatively cheaper and widely used by contractors, these rods have never been backed by international research. Worse, they are often installed at the wrong places, like the center of the roof instead of at all the roof corners, which Robiah’s research proved are more prone to lightning strikes. Instead of several small rods, the ESE uses a huge ass rod to actively attract lightning to it. Img from PolyHardware.

Some contractors only installed one rod to protect a whole building, with no regard to the size or shape of the building. Due to this, Dr Mohd Zainal believes that at least 90% of our buildings are not protected.

Even at the beginning of Robiah’s discovery, the story can get a bit depressing. When she presented her idea at an international conference in Kuala Lumpur decades ago, people scoffed at her idea. Local academics were said to reject her idea on the basis that she had neither postgraduate qualifications nor laboratory experience. Other claimed reasons for not accepting her idea was that her studies were not found in any textbooks at that time and because her study wasn’t funded by the government. To be fair, we didn’t have BR1M back then. Img from iMoney.

Regardless, her presentation caught the eye of one of the IEC’s committee members in Australia, Professor Mat Darveniza, and he proposed the method to the IEC. After several years of tests, the IEC finally included it in one of their standards, making Robiah and her husband and co-author Hartono the first Asians to have invented a new lightning protection design for worldwide application. Somewhat ironically, when the Malaysian government adopted this IEC standard in 2011, they’re adopting something that some of them rejected many years ago.

While Robiah’s story can be said to have a somewhat happy ending, one can’t help but wonder how many more great discoveries that went unnoticed in Malaysia.