Has this ever happened to you?

You woke up late, so you rush out of the house with a piece of roti canai in your mouth and ran off to the LRT station. But what’s this? You didn’t look both ways before crossing the road! Naturally, you got run over by a backhoe, but fortunately you didn’t die.

Unfortunately, when you wake up, you find that you’ve been sent to another world where magic exists… haha, you wish. In the most disappointing isekai plot ever, you’re still in Malaysia, but it appears that you’ve been sent back in time. Worse still, all you have on you is a RM20 note, and like RM5 in your Touch n Go e-wallet. Yikes. Somehow the anime reached season 3. Not sponsored by the way. Imgs from Pa&Ma, Pinterest, and SeekLogo.

Now you have to survive and find your way back home, but… how will you do all that without money? When you left 2021, the ringgit had only been around for about half a century or so, and e-wallets even less than that. You need to get some money, fast. But what kind of money will you need?

Well, rejoice, dear readers, for today’s article will serve as a rough guide in the unlikely event of this exact situation happening to you! We’ll be looking at some common forms of currency throughout the Malay Peninsula/Malaya/Malaysia’s history, starting with…

Before the 1400s, you’re going to need a silver… tongue

[Small disclaimer: we won’t be covering all of the different kinds of money you can use in the past, just the most notable/interesting ones. You can always figure out the smaller details once you get there.]

A lot of past money in pop culture can be represented with a sack of jingling coins, but from what we’ve learned, it seems that a lot of old coins didn’t become popular in Malaya until the 14th century. Before that, the most common coins seem to be copper ones from Chinese traders, who frequently took the land shortcut from Patani to Kedah. These coins made an appearance starting from the 8th century, and they were often the most popular, if not the only coins being traded. Their most recognizable traits would be a square hole in the middle, and some Chinese characters. An assortment of old Chinese coins. Img by mc559.

Other than these coins, you can just try bartering stuff, which is just exchanging goods on a suka sama suka basis. Negotiation skills would come in handy here, because you would first have to find someone to trade with, then convince him or her that your junk is worth something. If you’ve already traded away your modern clothing, you can try trading with skills. If you can do carpentry and you need some rice, go around the rice farmers’ houses and ask if they want a table or chair or a bedroom set, and see if they’re willing to pay you in rice.

Bartering and Chinese coins should suffice for this time, but it’s worth knowing about the other popular kinds of money as well. Cowrie shells seem to also be common in this time period, and you can pick them up from the beaches of Maldives or Borneo. These are often stringed up, partly as denominations and for ease of carrying, and partly because they’re sort of amulets for childbirth and fertility. Apparently they’re not worth that much, but they should suffice for peasant shopping. Cowrie shells (left) and biji saga (right), which grows on a vine. Imgs from Liberal Dictionary and Forestry Dept.

Cowrie shells, along with rice and scarlet beans (aka biji saga in Malay) were common commoner currencies, while merchants, particularly in the early Malaccan port, were known to use the more valuable gold dust, silver bars and tin blocks. Chinese merchants in Sarawak paid for the locals’ produce with beads, and the locals paid each other with ceramics and brass items. It was a pretty chill time, financially, so as long as you can negotiate, you should be fine.

Moving on to the next era No, not exactly the ones needed to free Calypso from her mortal bonds, but they have a common root. Pieces of eight is another name for the Spanish dollar, which was made of silver. Because of the milled edges, their value is unlikely to be compromised by unscrupulous trades shaving off parts of it, making Spanish dollars one of the most popular currencies for trade at that time. In fact, you can probably use it to buy stuff anywhere there were merchants, whether it’s Perlis, Sabah, Singapore, Johore, or even Batam.

Pieces of eight are called that because each dollar is worth 8 reales, Spain’s currency at the time. The money is worth the silver it’s made off, so to make small change these dollars were often sliced into 8 pieces much like a pizza, with each slice worth 1 real. So no need to be alarmed if you were handed coin slivers – they’re probably parts of a Spanish dollar, and they can still be used to pay stuff with.

Besides these Spanish dollars, this time period was when trade was booming, so we had a lot of foreign currencies. Many Malayan states have also started making their own coins, starting from Malacca in 1445. You might also notice that this was also the time period when the Portuguese, the Dutch, and the British have started to enter Malaya as well, so with all these foreign, local, and colonial coins going around, talking too much about them would bore most people, so we won’t be going too deep. Hit us up if you want an article on those, but we’ll only be briefly talking about some of the weirder currencies here, so that you don’t get flabbergasted when you encounter them. These include:

This was a time when more than one kind of money can be acceptable at the same time and place, so you can expect to find Johor coins in Kedah or British dollars in Sarawak, for example. You’ll have to look around and see what people are using, but some of the more popular ones were the Spanish dollar (as mentioned above); Dutch ducatons, guilders, and doits; and Java rupees. Coins at this time can be made of tin, brass, gold, silver, or even lead, so if you’re unsure which one you should try to get, go for silver and gold since those have value on its own. But such a carefree time would soon come to an end…

From the 1890s on, you need to be aware of which paper money was valid and when

So far, whichever money was popular (the Spanish dollar) came naturally, and nobody enforced things and told people which money to use. But that would soon change. In the beginning, the Straits Settlements (Penang, Malacca and Singapore) were under the British Government in India, and they asked the Straits Settlements to adopt the Indian rupee. A law was passed so that people can only trade in Indian rupees, but it didn’t take because Spanish dollars were way more convenient to merchants.

Then several things changed. The Straits Settlements was transferred under the command of the Imperial Government in London, mints that made coins closed down, silver became short in supply, and suddenly everybody needed more cash. So in the 1890s they came up with a new currency called the Straits dollar. To address the lack of coins, the Straits dollar came in both coin and note form, but they weren’t the first paper money in the Straits Settlements: private banks had existed then, and they’ve issued their own notes before. 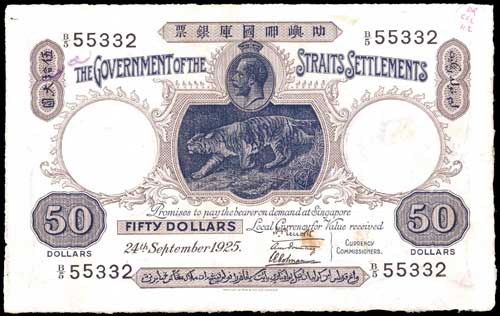 One of the forms of a 50 Straits dollar note. Img by De La Rue.

In the late 1930s, a commission suggested that the power to make money for the Straits Settlements as well as the other Malay States and Brunei should be held by a single Currency Commission, so in 1939 the Straits dollar was replaced by the Malayan dollar, at the same value. The Malayan dollar continued up until the Japanese invasion in 1942, where it took a short break. 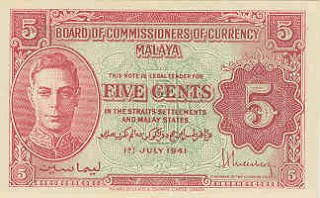 The Japanese discontinued the use of Malayan dollars and issued their own money, known famously as the banana tree money because of the picture on the 10 dollar note. In the beginning, the Japanese dollar was traded at the same value of the Malayan dollar it replaced, but over-issuing soon led to inflation and made it worthless. In 1945, the Japanese lost, and the British came back, along with the Malayan dollar. It assumed the value it had before the invasion.

In 1953, North Borneo and Sarawak wanted in on the whole single-money-issuing-commission thing, so again the currency changed to something called the Malaya and British Borneo dollar. It assumed the value of the Malayan dollar, and besides being used in Malaysia and Brunei, some parts of the Riau archipelago adopted it as well. This currency stayed throughout the Merdeka years and the Malaysia-forming years, until 1967. To sum up, here’s a rough timeline: Wow, that’s lazy. And uh, SS here means Straits Settlements, and the why there is kind of an oversimplification of the issue. Imgs by Bradbury, Wilkinson & Co, Yosri, Slleong, and Alchetron.

In 1963, Malaya, Singapore, Sabah, and Sarawak formed Malaysia, and in 1965 Singapore left the chat and became an independent republic. The Malaya and British Borneo dollar persisted all through this time, but in 1967 the sole currency board from earlier split up.

As for why, it seems that in 1959, the Central Bank of Malaya was established, and the government of Malaysia in 1964 announced that they wanted to replace the Board with it. Singapore also did not seem to want to share a common currency, but regardless of all the complicated reasons behind it,  the bottom line is that the board split up, and each country began issuing their own currencies. Malaysia came up with the ringgit, while Singapore and Brunei came up with their own respective dollars. At first, the three countries entered into an Interchangeability Agreement where the different currencies of these three countries will always remain the same value as each other, but Malaysia wanted out of that. So in 1973 it left, allowing the value of ringgit free to go its own way, while Brunei and Singapore remained in the agreement. Also, as an aside, it’s worth noting that up until 1992, the official symbol of the ringgit was M$ instead of RM. The shift happened at the end of that year.

But that’s not important to this story. What’s important is that if you remember to brush up on your negotiation skills, learn a primitive craft, recognize silver, and remember which money was used when, you’ll probably survive being sent back in time. Just don’t go around introducing some weird currency while you’re there.