Tis’ the season!  Time of year to slack off as companies wind down for the financial year, children are off to their school holidays and everyone revels in their vapid consumerism!

Yes, Christmastime, the malls tell me so, the internetz tells me so. But more importantly, the news tells me so.

In this time of extreme religious sensitivity where Muslims are told not to wish their friends a ‘Merry Christmas’, we stumbled across this old gem of a Hari Raya video featuring what we could only describe as… Pak Cik Claus in a flying beca. We knew we had to share it with ugaiz (and not just because it’s an epic work of art, k).

In 2010, back when we were still clawing for bandwidth on our expensive internet connections built on our telephone lines. This was a time when cellphone data plans were a luxury, so most of us still had to occupy our time by watching television. Malaysian TV tends to not air much in the way of Christmas advertisements other than just a generic scrolling graphic, the more interactive TV channels tend to make advertisements poking fun at themselves.

And then there was this ad.

Woah the scene cut so fast, can slow down a bit?

OK, OK. This sparkly 1:02 advertisement for Hari Raya Aidilfitri aired early September (1 Syawal was on 10 September) and drew quite a bit of attention.

It starts out with a child drawing a beca, which in turn, with the help of sparkly wonder, turns into reality with an elderly white-haired pak cik beckoning him to get on board the red lined, 5-wheeled trishaw. (Not sure if I can still call it a trishaw if its 5 wheeled… penta-shaw? Not important.) 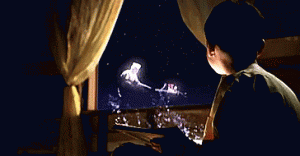 They then coast the skies like the greeting cards and Coca Cola commercials of yesteryear, picking up other children and touring the country with Malaysian scenes and locations, such as the Penang Bridge being lit up… Sant..- I mean. The white haired uncle in a beca coasting across the night sky

… the senget tower at Teluk Intan… Leaning Tower of Teluk Intan.
If I recall there is a nice chee cheong fun place around the corner. You go behind this, then turn… right? opens at 5am for good stuff.

… and the quintessential Malaysian landmark, the Petronas Twin Towers… Totally not a sleigh. Nope.

So… Whats wrong with that?

Well, it really looks like a Christmas advertisement, duh! With a song about the holidays, all the sparkly magic and shooting stars, it’s also easy to look like a sparkly old Coke commercial.

NAH, BACA:
How Christians saved a whole race in Sarawak from going extinct

Outside of the references to Christmas, some people even detected elements of Deepavali in the advertisements. Must have been the bloomin’ flowers towards the end of the advert… Ok, quite sure it was the lotuses. Lighting up some lamps and passing them around

That must have made some people a bit marah, right?

Unfortunately, yes. While some took it in good grace seeing that “the spirit of Raya goes beyond traditional Malay elements”, many others were displeased and immediately complained about it.

After all this, the advertisement was taken off air in under a week, just before Hari Raya itself. The network even apologized for the advertisement on their news broadcast and from what reports say,  hit with a hefty fine.

Wah did this blow out of proportion? What happened to moderation??

Well, that happened when there was a lot of heat about racism, as just a month before that, a Kulaijaya principal allegedly used racist remarks towards non-Malay students in a Merdeka day celebration.

Of course, that Namewee feller also had to chip in a response so both sides of the fence have due reason to be disturbed. Link to full video– no longer on Namewee’s account but reposted on other accounts.
WARNING: VERY EXPLICIT CONTENT

2010 was also the first year that there was a set holiday commemorating Malaysia Day, so understandably, people were rearing for a holiday a week from Hari Raya that was meant to celebrate the unity of all Malaysians.

But in 2014? With ISMA telling Muslims they’re not allowed to even wish their Christian friends Merry Christmas, it’s actually surprising that most of you probably haven’t seen this video before.

But really, y’know what?

Everything conflicts with everything else, because if we are out to please everyone then we might as well make as if nothing is going on this time of year. You can’t please everyone. Comic from Explosim.net (Cyanide and Happiness)

This season (actually, applicable off-season too), just go with the flow, buddy… We’re a culture of generally wish-y folks, where we’d greet Muslims ‘Selamat Hari Raya’, the Chinese ‘Gong Xi Fa Cai’, the Indians ‘Happy Deepavali ‘(among many other events) and sapu their delicious festive food while at it. This actually goes to show just how moderate and inviting we Malaysians are.

If you agree with Isma’s concerns, take advantage of the offers the shops give out and take a big bite out of the energy of that everyone has now that everyone is in that holiday mood.

Call out the friends and family for an important celebration, which is liberating them from their family members and screaming children that have been on holiday if nothing more than for a few hours. It’s Christmas, it’s the end of the year.

Have yourself Merry Chill-mas, from pak cik Claus!