Police arrested Dr. Ganja, a 58-year-old man who’s been selling marijuana on Facebook. If not for his nickname, his marijuana-related posts, and the fact that he openly reveals his products contain marijuana, we could mistake his Facebook business to be a normal BAKERY… Dr. Ganja has been selling chocolate brownies, cakes, chocolates, milk, and honey… laced with marijuana!! But the self-styled ‘caregiver’ sees his products more as medicine with general ‘health benefits’ that can also ‘cure chronic diseases’, rather than confections. He would post pictures of them on his Facebook page, never disclosing prices, although some papers reported prices to range from RM5-RM150. Other posts show him smoking from a bong and success-story clients (including children he claims to have cured of epilepsy, leukaemia and cancer).

According to Dr. Ganja’s neighbours, he was known to locals as ‘medicine man’ and many came to his house at Kampung Delek Dalam, Klang to be treated. This was also where he was arrested on 26 May.

“They would always come to my place to ask for directions.” – Dr. Ganja’s neighbour told The Star

But is Dr. Ganja just another quack or is there truth to his claims? A boy that Dr. Ganja claims to has fully recovered of epilepsy

In one of his posts, Dr. Ganja claims that his chocolates, Bhang (Bhang is an edible preparation of marijuana used in food and drink as early as 2000 BC in the Indian subcontinent), helped a young boy recover from epileptic fits. Another was a mom who was cured of Stage 4 cancer after consuming canna oil, canna honey and Bhang lassi. Yep, you can make lassi out of marijuana too. Apparently you can make a lot of food items with it, like marijuana pizza in Cambodia. 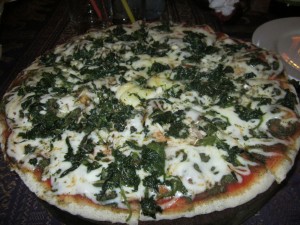 The ‘medicine man’ himself has a testimony on how the substance gave him a new lease on life. Formerly, he served as an army officer for 22 years, he said, however after retiring, high blood pressure, heart problems, spinal chord tumour, and diabetes (where he lost a prostate and kidney) began to attack his body. He suffered for years until a friend introduced him to medical cannabis (aka marijuana. ya, it has dang lotta names):

So is this legit or a pile of bollocks? Well, this is only a hunch, so don’t marah us, but the average Malaysian probably has one thing in mind when we think of marijuana…….DRUGSSZS, DADAH MEMBAWA PADAH!!!

YES, it can be used medically in certain countries, but it ISN’T in Malaysia. It is ILLEGAL in any and every form…whether recreationally or medically…no excuse! We have very strict drug laws. Section 6 of the Dangerous Drugs Act 1952 prohibits possession, an offence punishable with a jail term of up to five years, or a fine not more than RM20,000. Under Section 39A, being found with over 50g is punishable with a jail term of at least five years and at least 10 strokes of the rotan! 😯

The thing is, there are parties studying the use of medical marijuana. When used on people with autism who display self-harming behaviour, it is believed to calm them. When used on people who have epilepsy, it is believed to treat seizures. Here are more uses. But the problem lies in the LEGALITY. Almost everywhere around the world, marijuana is illegal or restricted, which subsequently hampers any study of it. Wahh, much orange, no scurvy. Image from Wikipedia

With only three countries where their governments actually sponsors medical cannabis research, how to learn more about the potential of the substance? Maybe we’ll never know, until governments lift the red tape and allow studies to be conducted. All we have to go on at this point are people’s testimonies, like from parents of children with autism, parents of children with epilepsy, and…from the Dr. Ganja’s patients.

So is marijuana really BAD or could it just be a cultural taboo? There are arguments to legalise marijuana in order to regulate it properly, to create jobs and economic opportunities in the formal economy instead of the black market, and save money on law enforcement. More importantly, the argument is that it promotes consumer safety because scientists have found illegally obtained marijuana to contain fungi, and even pesticides and heavy metals. Criminalising it on the other hand leads to black market trade, corruption, and fails to curb youth access. Long story short, legalise and control, rather than illegal and uncontrolled.

People point to Prohibition in the US from (a time when alcohol was banned) to show how ineffective banning stuff is. Prohibition is said to have caused a lot of crime, because it gave rise to famous bootleggers like Al Capone and Lucky Luciano – and deaths, because people would concoct their own messed up and super dangerous bathtub gin.

Plus, there is an argument that marijuana as a drug is not as bad as other drugs. In fact, it’s supposedly less harmful than alcohol, nicotine, or even caffeine!! Bye bye kopi and teh.

Coincidentally this was from a movie about drugs lolol

Check out this graph showing drug dependence and ability to cause physical harm. 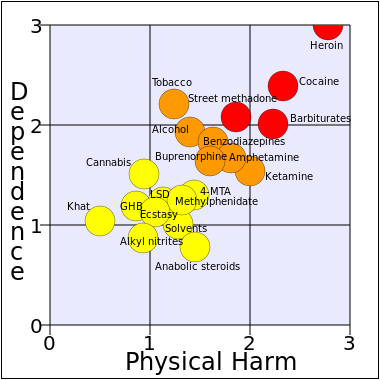 This drug shows drug harmfulness. What did we say just?

The worst on this list as you can see, is heroin (but personally we’d say the worst drug award prolly goes to Krokodil). And FYI heroin is the most abused drug in Malaysia, although others like meth (aka syabu) are catching up.

At the same time, we shouldn’t ignore the adverse effects of marijuana. While some people experience euphoria and relaxation, some might experience anxiety, fear, distrust, or panic, and to some extent, hallucinations and delusions, especially when a person takes too much. It can impair a driver’s abilities too, though in Malaysia our own scary driving is a bigger factor in road accidents.

We didn’t find local ganja-related accident stats, however states in the US that legalised medical marijuana noted a drop in road accident, possibly because users might be more aware of their impairment (coz doctor prescribed means they will also warn mah). Experts also say it’s possible that patients substituted weed at home for booze in bars, therefore staying off roads. Or it could be increased police presence following its legalisation. What’s worrying is that the authorities don’t have a method to test drivers for weed intoxication yet, so there are concerns about high drivers. And despite its lower dependence level, users could still experience withdrawal symptoms. Frequent users have reported irritability, mood and sleep difficulties, decreased appetite, cravings, restlessness, and so on. Like cigarettes, it can affect babies, developing children and adolescents, so if parents (particularly pregnant moms) smoke, it could affect their kids.

NOWW the most important question… Has anyone DIED from it before? The short answer is that weed itself does not kill people but the use of it can cause side effects which may lead to death – no good for lungs, accelerated heart rate,

Screenshot of the marijuana advocate groups in Malaysia

Dr. Ganja is not alone. There are others who are advocating legalising marijuana too. We found more groups such as the MalaysiaMedicalMarijuana and Gerakan Edukasi Ganja Malaysia that have over 22,000 followers respectively. There’s even a group called Malaysia Moms for Marijuana with 11,000+ followers.

Additionally, at a Youth Parliament sitting last year, a Selangor representative said that youths suggested regulating the use of marijuana instead of fully criminalising it. He explained that many youths here do not see it as a drug. “Hold on, hold on. I am merely expressing the views of the youths that I meet at the grassroots. We are not asking for it to be legalised but supervised,” he said. IGP Khalid’s answer to that was (of course) a resounding NO. The idea was also rejected by Health Minister Datuk Seri Dr S. Subramaniam.

On the medical side, some doctors are for it with the highest support coming from oncologists and haematologists, as it is typically used to treat chronic pain, Dr. Maya Nagaratnam, Pain Management and Anaesthetic Consultant with Pantai Hospital, said other stuff might be less effective than medical marijuana, as well as far higher tolerance and addiction levels. She recommends maybe a named patient basis under clear supervision.

“Oral cannabinoids are not new; however they have become available and they’re FDA approved, and so, I think we should consider it in a repertoire of treatments for certain chronic conditions.” – Dr. Maya, Malay Mail Online

But not all doctor’s share the same opinion. Dr. Mary Cardosa, Consultant Anaesthesiologist and Pain Specialist with Selayang Hospital said not enough research has been done on the effectiveness of using marijuana for medical purposes and the long-term effects are unknown. She adds there were alternatives to manage pain, including natural ones, like exercise, relaxation, changing our lifestyle, sitting and standing frequently, etc.

“It’s looking for a quick fix. There’s no magic bullet. So I won’t push any company to bring the drug in because I don’t think it’s an essential drug; it may be a ‘nice to have’ drug but not a ‘must have’ drug.” – Dr. Cardosa, Malay Mail Online

Sooo, do you think Malaysia will legalise it? Maybe one day, but probably not any time soon.

Prolly not any time soon

Share this article:
NAH, BACA:
Got an IDEA for your dream BAR in Ipoh/KL/Penang/JB? Guinness might make it into a reality ;)