UPDATE (8 Jan 2015): The 4As have removed Dentsu’s Kancil Awards, and Dentsu has responded by resigning from the 4As. We explore the latest developments. Click here to jump straight to the update.

So late last night, one of our keen-eyed readers sent us this post he came across on Reddit, where a UK-based designer named Tom Anders suspected that a Malaysian ad agency, Dentsu Utama had stolen his design for a WWF (wildlife, not wrestling) ad campaign. The campaign subsequently won a Silver Award for Outdoor Advertising at Malaysia’s prestigious Kancil Awards this year.

After a few hours, the post already has more than 200 comments, with advice ranging from asking him to tweet about the incident (which Tom has since done), to legal action (which as far as we know, he hasn’t).

Hey, @dentsuaegis @WWF I think you may have blatantly copied my design in your award winning poster. pic.twitter.com/2XUTF65CkW

Long-time CILISOS readers will know that we aren’t huge fans of plagiarism, having had our work plagiarized by The Rakyat Post, Malaysia-today, and the Malaysian Chronicle, amongst numerous others. So we thought we’d take a closer look at what at first appears to be a classic case of sadly Malaysian unoriginality.

PS: The owner of CILISOS also owns NagaDDB, which is an advertising agency. This article, however, was NOT published with any involvement from either the owner, OR anyone from NagaDDB. We are currently trying to contact someone at Dentsu Utama for comment, after which we will update the article if necessary.

Are the two pictures actually the same?

Internet move so fast wei. Another commenter, meiguoren, did this Photoshop overlay of the two images, less than 3 hours after it was posted. click to view the full overlay from Meiguoren’s IMGUR

The blue lines are Tom’s designs, and the Red lines are Dentsu‘s. While it’s not an outright copy, it is an alarmingly close one, especially the way the circles outside are almost aligned. FYI, Tom’s design was published 27th April 2014, and Dentsu’s as far as we can tell, was published on the 22nd of July 2015 on Creativelink.info (an internal Dentsu resource site), although it looks like the designs were in art galleries some time before that.

However, you might also notice that Dentsu’s verion has like a target reticle on it, which is meant to sell the message “There are only 200 Cross-Red Gorilla’s left. Stop the hunting.“. Here are a few more designs from the same campaign Dentsu ran… Tom also has a few more animal designs in the same vein, although only one other is remotely similar to Dentsu’s designs. The others aren’t even the same animals. 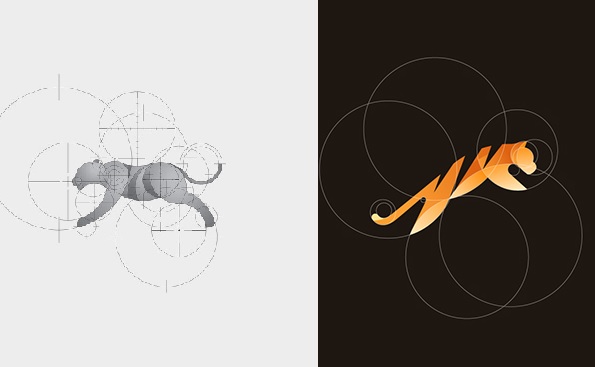 Could this just be coincidence?

As much as we’d like to call out the plagiarism witchhunters, one of the Reddit commenters also pointed this out.

“The problem is, using circles like this in the creation of logos and such in Graphic Design is EXTREMELY common practice. While the Gorillas are similar enough that he could possibly do something about that one, it doesn’t protect the style. I can go do the same thing to a toucan and he would have no grounds to stand on. Using base shapes to create forms is Graphic Design 101.” – JustCallMeDerek, on Reddit.

And another user gave the example of the Twitter logo. So it seems circular motifs are quite a common thing.

And to be fair, Dentsu Utama did come up with the idea of converting those motifs to crosshairs, which is a pretty cool idea!

However, to be fair again, this isn’t the first time Dentsu Utama has been accused of copying someone else’s work. Just earlier this year, they won several awards for this cool skateboard with a design inspired by a Chinese liniment brand, only to be accused of copying a set of designs by actual Chinese skateboard designers, BlackKnight Challenge Skateboards. Another campaign accused of plagiarism from Dentsu. Images from mumbrella.asia

In other news, BBDO Malaysia was also called out for copying their 2014 KFC ad from a series of Burger King ads from 2008. At the end of the day, there are two factors at play here. Remember how Daft Punk was accused of stealing their song “Get Lucky” from a Korean-born guitarist who once lived in Malaysia? It was really really similar, but also really difficult to imagine Daft Punk being as …er.. Daft, to steal a song in this day and age, particularly one called ROBOT DANCE.

“Let’s suspend for a moment the absurdity of the claim, which would mean that two of the biggest producers in the world were trolling the Internet, found a YouTube video by a kid who recorded himself playing guitar (of which there are likely millions of examples), and liked it so much that they decided, “Yes, this song is so crucial to our musical ethos that we MUST steal it from him.”” – Jake Cohen, consequenceofsound.net

And similarly, it’s hard to imagine a creative firm taking a risk in this day and age to actually copy someone’s work and claim it for their own. It’s possible that this was some sort of a cosmic coincidence (perhaps the opposite of Getting Lucky). You might say two bad coincidences in a year could be hard to believe, but then again… people might have sadly said the same of MalaysiaAirlines fate last year. #toosoonbutonlyexamplewecouldthinkof 🙁

Of course, if it were to happen a third time… then it would probably be fair to say Dentsu Utama needs to drag ALL its images through Google Images before submitting them to any awards. With many BIG Malaysian companies (like Unilever and BMW) shopping for new agencies this year, creative awards are arguably one of the main battlegrounds for agencies to vie for supremacy.

“Once is an accident. Twice is coincidence. Three times is an enemy action.” – Ian Fleming, Goldfinger.

We’ll be updating this article with replies from Dentsu Utama as they appear. In the meantime, let us know your thoughts in the comments below.

The Association of Accredited Advertising Agents of Malaysia, or 4As, who represents advertising agencies in Malaysia and has been organising the Kancil Awards since 1978 have removed 8 awards from Dentsu Utama’s 2015 entries. The Kancil Awards are seen as the industry’s top local honour.

“Dentsu Utama, without being given the opportunity to defend itself, has now been informed that eight of the Kancils awards related to the WWF Anti-Poaching Cross River Gorilla, and the Web Privacy Watch – Professional Man campaigns won in December 2015, will be revoked.” – Dentsu Utama’s Facebook page.

In response, less than a day after, Dentsu Utama has pulled out of the 4As, which is sort of a common-interest group that looks after the best interests of agencies in Malaysia. However, this isn’t yet reflected on the 4As member page here.

Interestingly, the  awards weren’t just for the Apes shown in our article, but also the Web Privacy Watch campaign shown above. The Chinese Skateboards campaign however, was declared “not sufficiently similar”.

English 101: What’s the difference between plagiarism, inspiration and coincidence?

Plagiarism:  the act of using another person’s words or ideas without giving credit to that person : the act of plagiarizing something

Inspiration: Something that makes someone want to do something or that gives someone an idea about what to do or create : a force or influence that inspires someone

Coincidence: a situation in which events happen at the same time in a way that is not planned or expected

We already addressed coincidence in our original conclusion, which was that three times in one year would be hard to believe, and so it has come to pass.

As for Plagiarism vs Inspiration, the interesting thing to note about both the Gorilla and the Web Privacy Watch examples are that though similar, Dentsu’s usage of the design was thoroughly unique – the crosshairs for WWF, and the man surfing on what he thinks is private space on the Web Privacy Watch. So by adding something to the original idea, it could be viewed as inspiration.

However, as a creative agency, if they were truly inspired, they should have credited the original image that inspired them – something that some Malaysian agencies do, but which some insiders have told us compromises their award chances. Because Dentsu didn’t credit the original images, then it doesn’t actually matter whether the images are “sufficiently similar”.

All that matters is if on someone’s laptop or mobile browser history within the agency – did they visit any of Tom Anders’ or Erik Johansson’s sites before creating their ads?