As someone who’s been playing video games for over 20 years, it’s been a wild ride seeing games go from the 8-bit Pokemon series we played on our Game Boy Colors to the unnaturally immersive titles we have now like Death Stranding or the Metro series. Graphics aside, the advent of voice chat changed gaming forever; it went from gamers screaming at their screens in single player games to players screaming at other gamers in multiplayer lobbies.

Ah, the time-honored tradition of slamming your desk and keyboard while gaming.

The demographic in gaming has shifted dramatically as well – ladies make up almost half of all online Malaysian gamers nowadays. That’s obviously good news, but there are darker implications to those stats: there’ve been countless examples of sexism and harassment against women in gaming. Some of you might even remember the positively shameful #gamergate controversy that exploded back in 2014.

To find out whether this sort of thing happens in Malaysia, who better to ask than our very own homegrown gamer girls? We sat down with Adriana Khoo, Ellemonade and Rina Tan to talk about the good, the bad and the ugly of gaming, streaming and the Malaysian eSports scene in general.

If you’ve ever dipped your toes into competitive and/or multiplayer games like Valorant, DotA2 or CS:GO, you’ll most likely have dished out and been on the receiving end of “toxicity”. For our non-gamer readers, toxicity is comparable to what’s known as “trash talk” in sports. Here’s some classic examples along with what they mean: 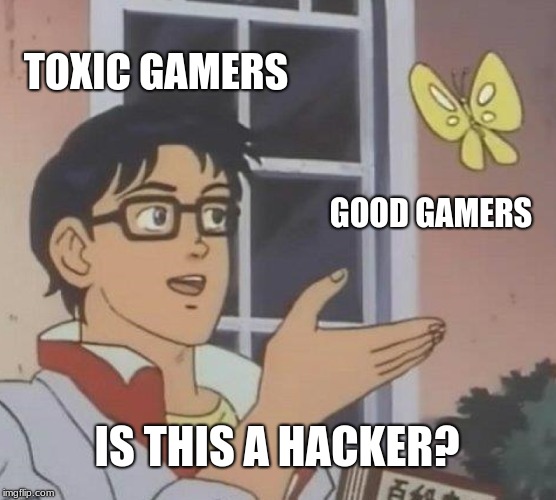 This happens every other match. Img by Imgflip

Gamers can confirm that this sort of stuff is fairly standard, but what you might not know is that female gamers get the Mega Mac version on top of the usual toxicity. Once other players find out that you’re a girl gamer, it’s not uncommon to hear disparaging comments in both text and voice chat. Ellemonade, a local gaming content creator and shoutcaster, shared some unpleasant things that happened while she was streaming: Why would you do that? Img by Ellemonade

For those who aren’t too familiar with the concept, streaming (or livestreaming) has been a staple form of entertainment for millennials and Gen-Z audiences for the past couple of years. Streamers, especially ones who are household names can not only sustain themselves but rake in serious dough. It ain’t an easy job, though. Nothing’s guaranteed since it’s essentially a type of self employment, and an annoyance popular streamer have to deal with is stream sniping – which is when people use a streamer’s livestream to sabotage their games. Adriana likes gaming, but hates being called a prepubescent boy.

Another guest in our interview, Adriana, told us how using voice chat can sometimes ruin her games:

In comparison with Valorant, you don’t see many girls playing CS:GO. Whenever I turn on my mic to do callouts, the first thing other players do is comment on my voice, asking if I’m a prepubescent boy or a girl.

This is why we can’t have nice things. Thankfully, all three of our guests remain undaunted by the garbage they hear from unsavory individuals online. You hate to see it, but sexist dudes aren’t the only thing they’re disappointed in when it comes to gaming. There’s something else – the state of eSports in Malaysia.

Like the remaining hairs on a middle aged man’s balding head, the Malaysian eSports scene is falling apart at the roots right now. When we asked our guests what they thought of the local eSports scene, Adriana and Rina agreed that it could use more work.

It’s hard to pinpoint the one cause of the stunted growth of eSports in our country. Our third guest who’s also a gaming content creator and shoutcaster, Rina, gave us plausible reasons about why that might be the case:

Not gonna lie, we don’t even have that many competitive gamers that measure up to countries like Japan or the US. We’re really not up to standard. There’s also the backwards mentality here that hinders the potential of gamers from going further.

For example, Korea has proper eSports schools and coaches but in Malaysia, we think gaming is a waste of time. This is the face of someone who’s not happy with the Malaysian eSports landscape. Img by Rina Tan

Odds are, several factors are at play – the lack of accountability by the Malaysian government and various organizations, the lack of publicity, the nonexistent infrastructure to help nurture young pro gamers.

There’s also a shortage of shoutcasters in Malaysia. Shoutcasting is to eSports as commentating is to, say, football. In a sense, they’re the voice behind eSports, driving energy and hype during matches. A possible reason as to why there aren’t many clamoring to pick up shoutcasting is the work that goes on behind the scenes. Among other things, shoutcasters have to memorize players on every team and the strategies they employ in whatever game they’re casting for,  Yeah, it’s not as simple as plopping down on your seat on match days and screaming into the mic, otherwise our boss could do it (sorry Chak).

While the future of Malaysian eSports is filled with many questions, a group of zoomers over at IACT College have something up their sleeves…

They organized an all-female Valorant tournament

Tune in, or else. Img by The New NRML

Let’s face it: like 90% of us probably didn’t do jack during our uni times except study and hang out with our friends. The New NRML (pronounced “normal”), on the other hand, are built different. These guys are a bunch of final year diploma students from IACT College and as part of their final year project, they didn’t want to just score good grades.

Not content with just a regular presentation or a research paper, The New NRML instead went for something a little more unorthodox: organizing an online all-female Valorant tournament, Rise of Athena. When asked why they chose to do that, Adriana, who’s part of The New NRML said:

In our heads, we were gamers, we wanted our project to be something entertaining, while also contributing to a greater cause (to acknowledge female gamers and be part of Malaysian eSports).

Female gamers currently have to grow thick skins and plow through to be part of the gaming industry, and we wanted to take a step to combat that. We also wanted to encourage female participation in the eSports scene. Maybe the tourney is just the catalyst the local eSports scene needs. On top of the tournament and looking for sponsors, the New NRML team have other assignments to complete. Despite the crushing workload and fears of hiccups threatening to upend the entire shebang, progress for the event has been going steady. As Ivory, another member of The New NRML describes it:

In all honesty, the planning for the event is actually going way better than we initially expected it to go. But it’s really because everyone has been putting in the work and hustling the best we can, because our team has been really passionate in making this event a success.

Seeing young people step up for something that’s much bigger than themselves is always inspiring to us old farts at Cilisos, so we wanna give these guys a huge shoutout. The Rise of Athena tournament is happening on 17 and 18 July (Saturday and Sunday) on their Facebook page where they’ll be streaming the games live, do check them out and give them the love they deserve!