Have you ever waited for a ferry to Penang or Pulau Pangkor from the mainland, looked at the close-ish island and thought, “Hey, I bet I could swim all the way there”? While swimming long distances in the ocean for fun may sound almost as bonkers as climbing mountains for the heck of it to some people, there are quite a number who enjoy the sport of open water swimming.

Open water swimming (OWS) is basically swimming outside the confines of a pool, so it includes lakes, rivers and oceans. Very recently, more and more Malaysians are opening up to this relatively new sport, with events such as Oceanman, attracting swimming enthusiasts, much like marathons attract joggers. The Kapas Marang Swimathon, another OWS event that will be held in April this year, had to close registration early as they’d hit the 450 participant limit. 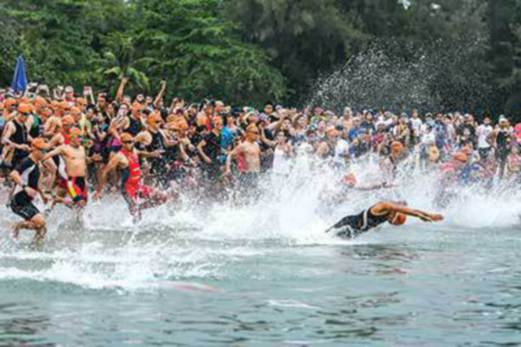 Just as there’s a bucket list of famous mountains for mountain climbers, the Straits of Malacca is basically the Everest of open water swimming events. Okay, maybe not Everest, but more like the Kinabalu of OWS. The most common route is the traffic-heavy seas between the shores of Pulau Rupat, Indonesia and Port Dickson.

Some Malaysians are organizing a swim across the Straits later this year for some 30+ people this year, so we asked them what it’s like swimming one of the busiest shipping lanes in the world. They are:

The first thing we found out was that…

Swimming across the Straits of Malacca is difficult, but it’s not impossible While swimming across the Malaysian-Indonesian border may seem outright impossible to normal people, many swimmers have (or claimed to have) done it in the past. Perhaps the earliest recorded person to successfully swim across the Straits was Shoichi Nakajima, a Japanese professor who managed to complete the swim in 26 hours in 1973, after failing an attempt the previous year.

Nakajima’s success had inspired many future swimmers who would later attempt the swim. In 2004, Khoo Hwee Chiow, a then 40-year-old Singaporean motivator claimed to have broken that record by finishing in 22 hours. Norazmin Abdul Aziz, a 28-year-old Malaysian, later made it into the Malaysia Book of Records in 2007 as the first Malaysian to swim across the Straits, clocking in at 24 hours and 36 minutes. 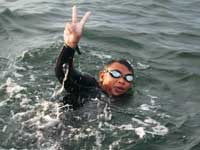 Norazmin during his attempt. Img from the Malaysia Book of Records.

As for Razak, he had crossed the Straits before in 1992 on a relay swim with a bunch of other swimming enthusiasts (we’ll get to that later) in 1992 and 2007, but like many others, he was also inspired by Nakajima, the first person to have achieved it.

“…so obviously it was a big dream among us schoolchildren at that time. We were like, ‘Wah. Foreigners swam the Straits of Malacca’. So that has always been in the back of our minds.” – Razak, in an interview with Cilisos

Some may think that since a lot of people had already swam across, it shouldn’t be that hard. However…

Perhaps the most daunting thing about swimming across the Straits of Malacca is the distance. The Kapas Marang Swimathon we mentioned earlier involves a swim of 6.5km from Pulau Kapas, Terengganu to Marang on the mainland. The upcoming Oceanman event in Langkawi will involve swimming a 5km triangle twice off the Tanjung Rhu beach, bringing the total distance to 10 kilometers, which by OWS standards is pretty challenging.

Crossing the Straits of Malacca may be at least FOUR TIMES that distance, which, after taking into account ocean currents and the swimmer’s navigational abilities, could be somewhere between 40-60km! Instead of Port Dickson, the swim these guys are attempting will end at Pantai Klebang, Melaka. Screengrab from Google Maps

Being fit enough to swim for a long time will definitely help, though there are other things to consider as well. Due to the length, depending on the weather and the swimmers’ speed, it may take somewhere between 12-20 hours to complete, meaning that a part of the swim will be at night.

“The swim may take sometime between 12 to 22 hours, so obviously some of us will have to swim at night. And not everyone can swim at night. It is one of the scariest things you can imagine.” – Razak, in an interview with Cilisos.

Due to the long hours, they have developed a way of eating and drinking while swimming. Generally, being assisted in any way, such as touching the boat amounts to disqualification, so food and water are handed out by poles from the accompanying boat, and swimmers have to eat and drink while treading water. You’ll have to bring your own cocktail glasses. Img from BizBench

Swimmers also face danger from sea creatures, particularly jellyfish stings. But a bigger problem may be passing ships. The Straits of Malacca is one of the world’s busiest shipping lanes, having an average of between 14-25 ships passing through every hour, so there’s also the risk of being hit by ships!

NAH, BACA:
[UPDATED: 3rd July 2017] Actually... How much POWER do religious authorities have in M'sia?

And as Razak told us, seasickness has been a big issue with relay swimmers. Generally, there’s two ways to go about an OWS: you either swim the whole length by yourself (called a solo swim), or you can do it as a team, with one swimmer in the water and the rest following on a boat, switching places after a set time or distance (relay swim). Being on a small boat on the ocean for long periods of time makes seasickness very likely.

Yep, it hard, even for experienced swimmers, which is why…

Swimmers will have to swim in a cage towed by boats, among other things Due to safety concerns, the conditions set by the organizers are pretty steep. When it comes to hazard from sea creatures, cages will be constructed for the swimmers, and these will be towed along by boats. However, as there will be both solo and relay swimmers who differ in speed and abilities, Razak admitted that there’s a lot of work to do in terms of safety and logistics.

To be considered, potential swimmers have to had done the 6.5km Kapas Marang Swimathon within a set time, or anything longer than that. For potential solo swimmers, they must have participated in a 10km swim within the past year. This, according to Razak, eliminates the non-professionals and swimmers who want to attempt a 40km swim, but had no experience.

Even if they have experience, they will still be tested, like having to swim for 1.5km under a certain time.

“We have to set a criteria, a standard for all the swimmers. The tests are simple. We’d ask them to go and swim maybe 1.5 (kms) and time that. We have guidelines, and if they can’t do that, we’ll have to politely decline and reject. They have to understand that this is a safety measure.” – Liz, to Cilisos Relay swimming from the 1992 event.

After being qualified enough to join, the swimmers will have to go through a few training sessions before the actual thing. To cope with what happens after sunset, Razak explained that a pool will be rented for them to swim in the darkness all night long, with psychological approaches. A month before the swim, another night practice will be held, but this time in open water conditions, swimming the Kapas Marang route at night.

The armed forces will be cooperating with the organizers for the swim, and Ridzwan recounted a rather strange training for overcoming seasickness from the army called the side-roll. Basically, 2 weeks before the event, after eating a lot, swimmers have to roll back and forth on their sides on a field until they PUKE everything back out.

“Until you vomit the yellow stuff, after that they say you’ll be okay. We got this from the RMAF guys.” – Ridzwan, for Cilisos.

The navy will also help in controlling traffic during the event. The organizers will try to get most swimmers to reach the shipping path at the same time by manipulating the starting times based on their speeds, and the navy will command passing ships to slow down to let the swimmers pass. While Razak had a hand in organizing a previous Straits crossing before, the upcoming swim in May is on a larger scale, having both solo and relay swimmers, as well as participants from outside of Southeast Asia.

“In our part of the world, there has always been a fascination for crossing the Straits of Melaka by swimming. It is an endeavor that has captured many people’s imagination and attracted a few daredevils. Our country is surrounded by water. Through this project, we hope to get more people interested in open water swimming and make Malaysia a swimming nation like Australia.” – Razak

When they opened registration a few months ago, Razak remembered that there were both swimmers who really, really wanted to join and those who were more cautious, as it’s a pretty big challenge. However, response to the event had been somewhat great. Even in the beginning stages, Liz revealed to us that swimmers from as far as the US have signed up for it, and most of the solo swimmers are actually foreigners.

While Malaysians are more involved in OWS these days, exposure is still pretty low. But Razak said that times are changing.

“It’s gaining momentum. People used to shy away, but now, they may be saying ‘we should try that’. ‘We should try that. Let’s go to Bali, let’s go to the Phillipines (OWS events)’. If it was before, sorry lah. ” – Razak, for Soscili

So if you watch them do it and cheer them on, follow their progress on Melaka Straits Swim 2018‘s Facebook page. Oh and if you know anyone, they’re looking for sponsors too 🙂